How I Met Your Mother...

er, Father.
I'm trying to be clever here. Give me a break.
Okay. Since this is the month of Gratuitous Posting (thanks NaBloPoMo) I'm going to tell a gratuitous story. The story of how I met Doug. Or at least the first chapter.
This needs to be recorded for posterity anyway, since Doug's memory is shockingly unreliable. (Puh-lease...I did NOT flirt as shamelessly as he claims!) (Or, if I did, he can't prove it.)
If you are one of the friends mentioned in this story, please feel free to correct or add to my details. Doug accuses me all the time of being a pathological liar, but in fact, I just have a creative memory. (No. Not like the scrapbook company.)
But I need to start at the beginning. Or at least, I need to start at the beginning of the year. Actually, the end of the year. Actually, Christmas 1999. Okay, I'm just going to start...
On Christmas Day, 1999, I broke up with my fiance. Over the phone. He was in Utah, I was visiting home in Carlsbad. It was a mutual thing but I'm not gonna lie...it pretty much ruined my day. There was much wailing and gnashing of teeth. Many tears were shed and one very regrettable e-mail was sent. By me.
My sister tried to help by getting me a date for THE VERY NEXT DAY! The guy was in fact very cute, but I'm afraid I wasn't good company...being all listless and staring off into space as I was.
My mom's effort to help ended up being more effective. She took me to visit my Uncle Clyde for solace and advice. Now, Uncle Clyde and Aunt Jeannette are two of the best people you'll never meet. Uncle Clyde was my surrogate dad after my parents separated. He helped me get through the last two years of High School with my head on straight. He was also my spiritual advisor, and I was in desperate need of advisement.
You see, I had met T when I was 16. I had fallen madly in love with him when I was 18. And at 21, I thought I would marry him. So our broken engagement threw me for a loop. 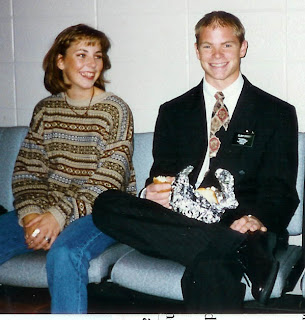 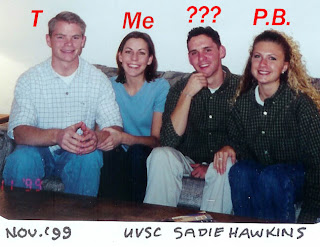 (This picture could be titled "He's Just Not That Into You". We had just gotten back together after a one year break and he called me the wrong name two times that night. Whoops.)

ANYWAY, back to Uncle Clyde. I went to him for help and that night he gave me a very special Priesthood Blessing*. A blessing that put me completely at ease and helped to heal a lot of my heartbreak. In my blessing I learned two very important things: 1) I had not yet met the man I would marry, and 2) It would be through my friends that I would meet him.
Of COURSE I was still heart broken. But I was at peace.
Unfortunately, I was stuck in San Diego because T was supposed to have been my ride back to Utah.
Fortunately, roommate PB and our friends Jayson and Chris drove out from Utah, celebrated Y2K with me in San Diego, (when I had been hoping to get my ring) and then drove me home to get on with my life. 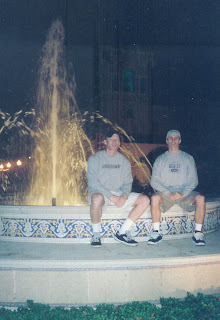 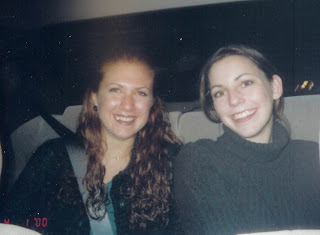 Life, just then, found me living at The Old Mill with two of my very best friends and my favorite 76 year old German; PB (Michelle), Anna, (Banana), and Ursula.
And things were pretty good there. Being in our early 20's, we were on the young side in that particular complex. (All except Ursula, of course, who tended to be on the slightly older side.)This meant we got plenty of attention from guys.
I resolved that I wasn't going to worry/obsess so much about boys any more. I was just going to date whoever I wanted, keep it casual, and focus on having fun. (Oh, and on school, of course...)
Thanks to the blessing from Uncle Clyde, I felt that confident that I wasn't supposed to marry T which made it much easier to move on and date other people. Which I did. Frequently. (But not nearly as many as my petite long-haired roommate PB, darn her!)
{In case you're skeptical, I should note here that I used to spend quite a bit of time in the ol' tanning beds, plus I had access to the wardrobes of two very fashionable roommates. So yeah...I was in top form and quite capable of securing a free meal most Friday and Saturday nights.}
It was towards the end of March when I got a call from Bryant**. Bryant was a friend of a friend and we'd been on one date and hung out a bit. He worked at a ski resort and I thought he was pretty darn cute. Anyway, he was calling because he wanted to go rock climbing and thought maybe my roommate Anna could get us in to The Rock Garden for free! Two other girls living in my complex had been wanting to go too, (Anna had offered) so I called them up and we all went together. Unfortunately, when we arrived, Anna had already gotten off work and none of us had brought money. I was JUST about to give up trying to sweet talk her co-worker into letting us climb when she walked in.
Turns out she had left work earlier and--I think-- had gone around the corner to visit her dad. On her way back, she noticed my car in the parking lot and came back in.
Just in the nick of time. We were set!
To be continued...
*The priesthood is the eternal power and authority of God. Through the priesthood God created and governs the heavens and the earth. Through this power He redeems and exalts His children, bringing to pass "the immortality and eternal life of man" (Moses 1:39). God gives priesthood authority to worthy male members of the Church so they can act in His name for the salvation of His children. Priesthood holders can be authorized to preach the gospel, administer the ordinances of salvation, and govern the kingdom of God on the earth. (Definition from LDS.org) Don't knock it 'till you've tried it.
**I went on one official date with Bryant and rock climbing wasn't it. He found out I'd never been fishing and decided to remedy that. We drove up a mountain. The road to the lake was blocked off. We parked the car and hiked through snow to the lake. It was cold. The lake was frozen solid. He taught me to "cast" for a few minutes until my fingers were blue and then we hiked back down to the car. It was a bit anticlimactic as far as first dates go, but I still managed to have a huge unrequited crush on him anyway.

What a great way to start off the week...your latest blog which has me rolling! Oh those 'free meals' were great, weren't they??!! :) And despite the break-up, interesting New Years festivities and the horrific snow storm we drove back in, that Cali trip was great eh!!!??? Loved the blog, and PROUD to be part of it...oh and those glorious years with you and anna!!! Love you-PB (have you seen my new blog...I am quite proud of myself):)

Oh the memories. I forgot about Ursala. I saw her at the temple a couple of years ago. Remember she would keep a small container of tuna fish in the freezer. That was all I ever saw her eat. She was a very sweet woman. I do not remember the details of the Rock Garden story. I do not remember you bringing a guy with you. But you always had men swooning around you, so that does not sound too far off.

Great start to the story! I have heard it already, but I can't wait to read it again!! Yea Rock Garden!!

What a cute idea! I love it!

I think its so interesting how things 'turn out'. I wasn't in the best position when I met my current fiance. Some day I will tell the story. Just not now! ha!

And by the way...
I nominated you for a blog award! Go to this link to collect your Award: http://blabberandblunder.blogspot.com/2008/11/day-10-of-30-my-very-first-bloggy-award.html

Emily, I can't wait for the rest of the story! I know none of this so it's all very interesting to me. I'll look forward to checking my Blog Reader tomorrow! Love, Aunt Sue

So, what does this have to do with Doug?

PATIENCE Anonymous! I'm getting there!!!

Hi, I am a total lurker. Today I thought I'd make myself known. Love the story. Can't wait to see what happens :)

PS I met you last year at the blogger breakfast we had at Mimi's in Sandy. Anyhow I sat across fromyou and I've been a fan ever since.