Another Fuzzy Memory...since my scrapbook was already out

I mentioned that Kristen broke into my room to decorate it.
What I DIDN'T mention, was what greeted her in my room!
She had to scale a literal MOUNTAIN of laundry just to get to my bed.
I have photographic evidence: 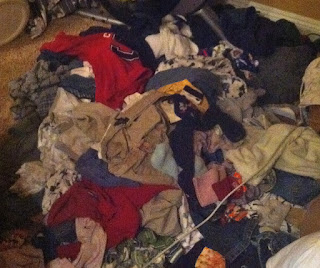 In my defense, all those clothes are clean and were initially dumped on top of the bed--not on the floor.  It's just that when they hadn't been folded by the end of the day and Doug and I were dead tired...they got shifted.  (And then left for two more days while the pile was added to and subtracted from.)
If Kristen weren't such a good friend I MIGHT have been a little embarrassed.
But I'm too tired for those kinds of emotions these days.


It did, however, remind me of a similar messy bedroom situation from long ago...
{cue going back in time music...}
When I was 16 and still living in Salt Lake City, my first boyfriend was Joe Nelson.  (Joseph Nephi Nelson to be precise...!  How's that for a good solid Mormon name?)
So anyway, one day, he came over to my house when I wasn't around to ask me to Homecoming.
He filled my room with shredded paper,  left a rose and a balloon, and covered the floor in Hershey's Kisses hiding in the paper... (that each had a sticker on the bottom marked with one letter that I had to put in order to spell out a message that led me to my tape player which held a cassette playing the Simon and Garfunkel song "For Emily, Wherever I May Find Her" and asking me to the dance).
It was all very romantic.
Only one problem:  My room was a hideous mess.
Clothes all over the floor, clutter covering every surface.
(And yet my mom let him in to my room.  Thanks for nothing Faezer.)
Later, when I thanked him while also expressing my embarrassment about the mess he mumbled something like..."yeah, I kinda noticed that..."


I think my slovenly-ness contributed to our relationship being short-lived.
*sigh*
Moral of THIS story is some things never change:  Once a mess, always a mess.

(For the record, I have one kitchen cupboard and an underware drawer that are so beautifully organized they could be on the cover of "Organizers Weekly".  Also, my clothes are in rainbow order and my hangers are all the same color.  Just sayin'...!)
3 comments:

IT'S MY BIRTHDAY (month) and Fuzzy Memories

My birthday this year has been great!  It all started on the 8th when Facebook announced to the world that it was my birthday.
I was getting calls and messages...

It wasn't my birthday.
My birthday was the next day.
(Maybe FB thought I was still in Japan where it WOULD have been my birthday...?)
Whatever.
I didn't complain.  I'll take praise and adulation whenever and where ever I can get 'em!

I've been celebrating ever since.

BUT, I've also had work to do.
Friday night was our ward Valentines Dance.

I'm the RS activity chair so I was there early and left late.
I think it went well...chocolate fondue was involved...
My friend Kristen came to the activity to teach a swing dancing lesson with her husband Shawn*.  (As a favor to me because she's awesome.)
{We've been friends since I moved to Carlsbad when I was 16.  She was great friends with my cousin Wendy so I got grandfathered in.  We were in the same grade, same class at church, and we've stayed friends for the last 18 years.  (Holy CRAP that's a long time!!!)
I was her bridesmaid.  She was my bridesmaid...you get the picture...! 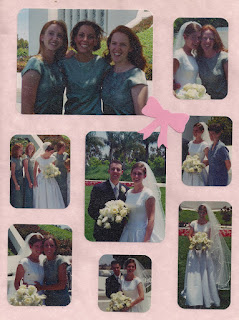 After they taught their lesson, they left.

And snuck into my house.
Actually, they didn't sneak.  The babysitter, my niece Ashlin, let 'em in and Kristen toilet-papered my room leaving a beautiful Orchid in the middle of my bed.

This isn't the first time she's pulled a stunt like this.
She decorated me 'n Fae's apartment for my 17th birthday and wrote "Emily Rules" in crepe paper on the ceiling.  (I believe Wendy and Mindy were co-conspiritors.)
I had only moved to Carlsbad two months before.  It had been a hard year.
On my birthday, a few girls went out of their way to spoil me and I felt very loved.

Moral of this story is some things never change:

I'm a lucky girl and Kristen is an awesome friend!!!
Happy Birthday to ME!
:)

*Shawn's not so bad either.  He created our logo, business cards, and website that we get tons of compliments on!!!
3 comments: