How I Courted Your Father -- Part IIII 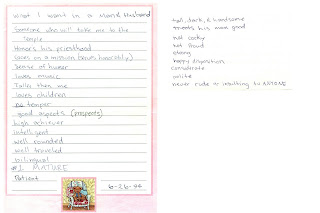 And now back to April, 2000.
Shortly after meeting Doug, I started keeping a mental tally in my head of his pluses and minuses.
Pluses;  Goes to BYU, has a definite career goal, (good aspects...I mean prospects!!) spiritual, handsome, funny, down-to-earth, rock climbs, similar family values, gentleman, worthy priesthood holder, loves his family....CHECK CHECK CHECK!
Minuses; played tennis in High School* and listens to Country Music. (bleh!)
I decided those last two were of no eternal import and decided to forgive him.   Oh, and he was tall, BLONDE, and handsome instead of tall, DARK, and handsome as clearly specified on the reverse side of my letter.  But I let that slide too.
That night I made a decision.  It was our second date and I distinctly remember thinking;
"I could marry this guy!"
And four months later, I did!
The End
(Was that too abrupt?  Should I go on?  You tell me.  I'm just really tired tonight.  But  I'm just here to make you happy, so tell me what you desire!!!)
*Sorry tennis players.  It's just that at the time I associated tennis players with short white shorts and sweaters draped over shoulders.  I've since forsaken that evil view and now look very favorably upon all the tennis players of the world.

Definitely looking for a part V. Come on, you can't leave us wondering what happened in between. Maybe Doug should do a guest post from his point of view . . .

Wonderful story. Yes, Toooo abrupt. You had us in the palm of your hands and then BAM! all done.

And you are right. Easy to love Dougie as long as you can thump him every so often! :)

I want more!!! ha! I think the 'Doug guest posting' idea is a wonderful one!!!

Yes, let Doug "fill in the blanks!" Wonderful story- nice to catch up on the things that I missed!

go on! I want to hear the courtship, especially how he proposed to you. Only four months after you met you were engaged??? How long was your engagement???

Your kids will really treasure this story. How fun. And yes, we do need more.