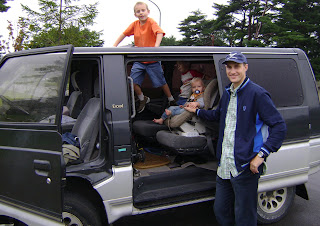 We bought a $500 car.  Yes, that's right.  Someone let us borrow it when we first got here, and we ended up buying it.  I mean, you really can't beat $500--even around here--and the A/C and 4-wheel-drive are all in tack.   We figured, Why not?  We'll drive it 'till it dies then get something nicer!  So it's not like we were unprepared.  We knew there would be problems.

***flash forward two months***
It was one of those good days. I was driving the carpool to preschool. The windows were down and I was blasting AFN which was playing that one song that everyone likes...goes like this...
"little ditty about Jack and Di-aaaaaane!  Two 'merican kids growin' up in-the-heart-land!"  (You know the one.)  Anyway, all of the sudden, I honked the horn!  Just a little toot.  I thought my arm must have bumped it in my zeal.  Then it happened again.  HONK!  Then again.  HONK HONK!!!
There were cars in front of me.  This was starting to get embarrassing.  I wasn't touching the horn but it was in fact honking.  Repeatedly.  Randomly.  Loudly.
A second later I arrived at an intersection where a Japanese man stood directing traffic around some road construction.  The horn blared at him.  I raised my hands in the air and looked sheepish.  He laughed and laughed while I drove away honking and pounding the steering wheel in frustration and annoyance.
By the time I got Sam to preschool, the random honking had stopped and I had partially recovered from my embarrassment.
In the next few days, the horn would blow at random times.  Sometimes going over a bump, sometimes just a random toot to say hello to a passerby.
I rolled my eyes.  What do you expect from a $500 car?
Then one night, at about 8 p.m.  I heard someone honking outside.
Loud and long.
Shattering the quiet of the peaceful evening.
It caught my attention.
I listened.
I realized it was in fact MY car making that noise.
CRAP!
I jumped up and ran for the door  yelling behind me
"DOUG!!!  GET A SCREWDRIVER!!!"
I barely made it in to the car.  The noise almost burst my eardrums.  I started my futile pounding and pulling in a vain effort to make it stop.
Finally Doug arrived with a screwdriver.    With a few wrenches and a little wire pulling he got it to turn off. 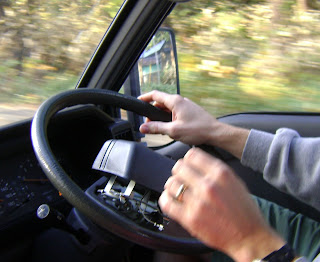 It was a quick fix.
Later, we would take more drastic and permanent action... 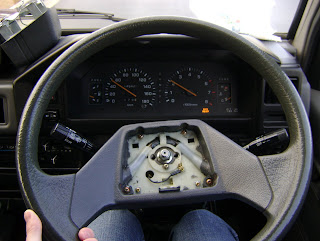 But at least, there will be no more random honking.
Ever.
And that's what we get for buying 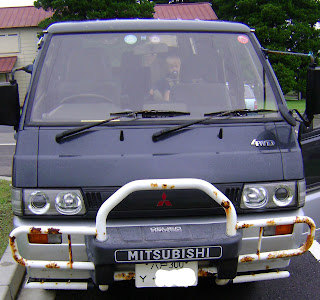 Email ThisBlogThis!Share to TwitterShare to FacebookShare to Pinterest
Labels: Driving in Japan

I think it would be fun to have a horn just randomly honk - especially if you could train it to only honk at the bad drivers!

Edward J. Dose said...
This comment has been removed by the author.
6:03 AM

That is so funny. I can visualize the embarrassment.

Despite its cheap price tag, the car obviously wanted to remind you of its other values.

OK, so this story is totally hilarious to me. It would be funny no matter what, but I have a similar experience.
We had an old old VW van growing up. And one day my mom was driving me to junior high for something. Suddenly every time she turned the wheel the horn would honk. She got SO embarrassed and her face turned all red. She was so mad. And it was so funny to me of course. It still makes me laugh.
Except now I think of it, and I know that I would have died of embarrassment and frustration if it would've been me, so I feel kinda bad for her--but just kind of.

You guys got a steal for only $500. I love the cow catcher on the front. Jack up the back and paint some flames on the side and it will really look cool.

That is sadly very funny! Loving your Japanese adventures.

you have the most random adventures

Too funny. We had a car like that - Jason loved it!

The washer fluid nozzles were broken and the fluid would shoot straight up in the air, so you could only use it on the freeway if you wanted to get the windshield clean. It always made me laugh.

There were other not so funny experiences, like the driver's side window falling down in the door when it's freezing cold outside!

If you've been driving it for 2 months, you've already got your money's worth out of it. Any more miles are bonus. Plus it gave you a great story! That van is worth it's weight in... rice.

Found your blog thru Paul's site. Cute! Hey we have had a similar experience with a car we paid a lot more than $500 for. Do airbags do those random things? Kit & Mike McD

Just be thankful it was your horn and sporadic rather than a continual car alarm, I have seen that driving down the road and it isn't pretty!