D-Dub has created his own blog because I wouldn't let him mess with mine. While I was stuck in traffic yesterday, he was out meeting hockey players at the Mac store in Manhattan.
Check it out at www.fromcoast2coast.blogspot.com.
No comments: 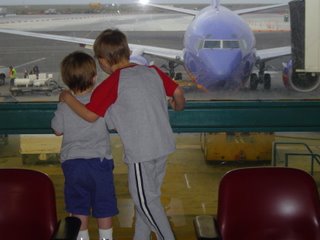 And by "here" of course, I mean Manhattan!!!

Okay, I've been without Internet access for awhile so I need to back up a little.

A week ago Monday we left San Francisco and crossed the country to arrive in Rhode Island. We went straight to our new home where we found the electricity hadn't been turned on and the floor was covered in cat hair.

So we left and went straight to Wal-mart for Swiffer accessories. Never before have I so loved and appreciated Swiffers! (Do you think they'll want to give me some coupons or somethin 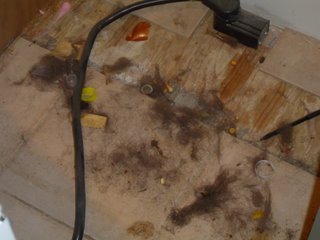 g for saying that?) After clearing a swathe on the floor for the air mattresses we all went to bed in a very hot house. (No A/C yet.)

The next day, sunlight revealed the full extent of the cat hair. (Hey cat owners, have you cleaned under your appliances lately? --->)

I'm going to save my anti-cat/anti-hair/anti-cat hair diatribe for later. Suffice it to say, we called a bunch of cleaning services until we found one that could send a crew over immediately. Four girls and four hours later (at $36 an hour per girl...you do the math) we came back to a much more livable and clean smelling home.

Wednesday instead of cleaning or painting, we found the local library and got cards for all four of us and a huge pile of books. (I got lots on New England architecture, antiques, and decorating.)

Thursday the truck came and we started unloading. (Whoops...maybe we should have bubble wrappped the WHOLE scanner.) 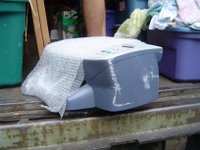 Friday one of *DoctorCaptain's fellow residents showed up with a friend to finish unloading the big stuff. At last, we had all our crap moved in, the electricity on, most of the blasted cat hair removed, and things getting slightly organized. I hope we got something done on Saturday but I don't really remember so we'll skip right to Sunday which is when I took DoctorCaptain to the bus station. Yes, that's right. With a home still very much in chaos and no friends or family around me, my "help meet" deserted me and went to New York for orientation.

Which brings me to today. (I should describe the last week, but it's getting late.) This morning (Thursday) I got up, packed the car, strapped in the kids, and hopped on the 95 South and headed for New York City. I drove a total of about 160 miles and it only took 8 HOURS!!! Yes, that's right. I stopped a few times the first two hours and made it to New York. That is where, with only 20 or so miles left, the traffic stopped moving. I then proceeded to go a total of ten miles in 2 hours. I only wish I were joking. This is apparently why people take public transportation in the city. 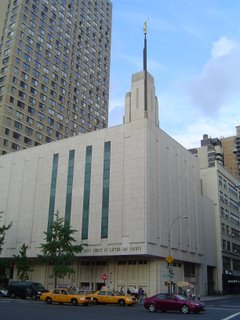 Anyway, I made it with my sanity (just barely) intact (at least as much as it was before) and I'm in New York City for the first time in my life, and so far I love it. (I'm willing to give it a chance at being a cool city even if it was hellish getting here.) Tonight the boys and I walked over to Lincoln Center, saw the BEAUTIFUL L.D.S. temple, and ate dinner at "Ollie's Noodle Shop and Grille" across the street.

So far, that's been my New York experience. Tomorrow, we're on our own for the morning while DocCap learns how to wash his hands throughly. (Or something really important and doctorly like that) I'm going to try to get mugged so I'll feel like I've achieved the whole NYC experience but we'll see how it goes.

*My revered spouse actually is a Doctor and a Captain now, and can't seem to figure out why I wont salute him when he walks into the room. 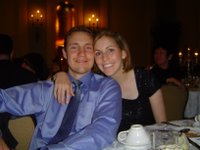 It's almost all over! Last Monday night was Dr. Dub's "Recognition Banquet". (Isn't my date a fox? I felt like I was at the prom with the Homecoming King.)

Wednesday was the "Class of 2006 Picnic" at Golden Gate Park. The Grand Finale will be this coming Saturday the 17th when he'll actually graduate!!!

In the mean time, life is a bit crazy. At the moment I'm stitting in the midst of towers of boxes; some full, some empty, some half full or empty...(depending on your attitude).

In fact, it's so messy in here I can't think of a single witty thing to say, so I'll have to sign off. See you at GRADUATION!!!
No comments: 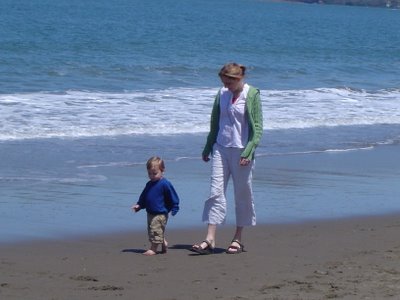 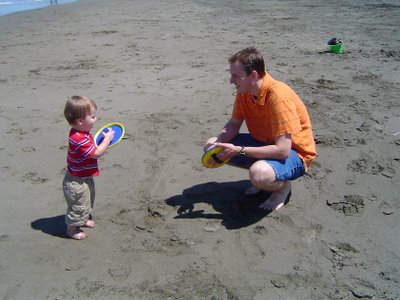 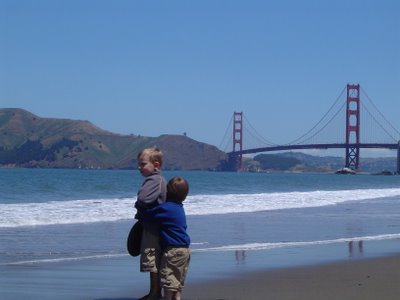 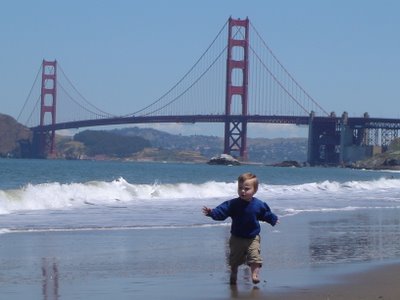 I don't mean to brag* but can you believe how stunningly adorable my children are??? Both boys love playing at the beach even if the water is somewhere near freezing and they have to wear sweatshirts because of the breeze!

This is one of the most beautiful places on earth. It's clean, generally uncrowded, and surrounded by some of the most awesome scenery I've ever seen.

{[Side Bar for future visitors: Baker Beach does have one down-side. If you walk to the end of the point, towards the bridge, you'll find a popular nude beach inhabited mostly by ugly (so I've heard) gay men** who, not coincidentely, also happen to be nude. Luckily, they tend to stay contained and out of sight.]}

* I do mean to brag.
**It's not that I personally have any problem with nude/ugly/gay/men aside from the nude/gay part. Men, even ugly men, are generally okay...) 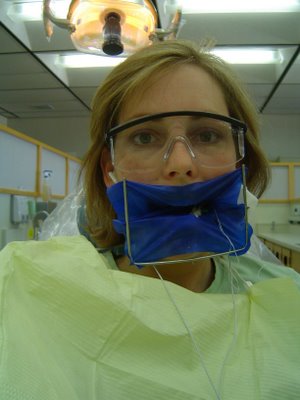 Medieval torture device? Close. It's called a rubber dam. And yes...that is me under there; in perfect compliance with all health and safety regulations. Just a few days ago I got the honor of being a patient for the Western Regional Board Examination. I got to enjoy having my mouth propped open for about eight straight hours and let me tell you, it was fun.

Don't get me wrong, I actually do like my dentist. In fact, I gave him a big fat kiss on the lips when he took all this junk off me. Nonetheless, it will be awhile before I see him for a follow-up.
2 comments: 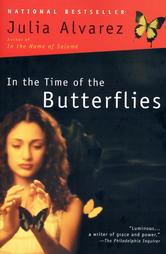 I just finished two books and want to mention them.
"In the Time of the Butterflies" by Julia Alvarez is fiction based on actual people and events. It's about four sisters living in the Dominican Republic who are involved in a revolution and living under the dictator Trujillo. The narrative switches from the sister's different perspectives and between past and present.
I like hearing in 1st person from different characters because it seems more real when you get to hear more sides of the story. Although the story is a little bit sad, (I really like happy endings) it was a quick read and interesting historically. Reading about what people have to go through in other countries makes me feel pretty selfish that my biggest gripe is when my kids don't sleep through the night.

Although the narrative style is similar in the second book, everything else is completely different. It is the second in a series by R.F. Delderfield and is a very weighty tome (798 pages) called "Theirs Was the Kingdom" it takes place in Victorian England and continues the story of the Adam Swann family started in "God is an Englishman". 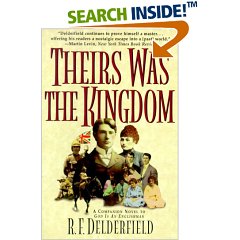 The worst thing about these books (by Delderfield) is opening and starting them. The sheer bulk is daunting and I was afraid I'd never finish the first one. Of course, once I started, I couldn't put either of them down. (Which is a problem in and of itself because trifling things like housework, parenting and personal hygiene tend to fall by the way-side.)
Both books, though, are very engrossing despite the fact that there is no mystery to be solved. (I luuuuuuv mysteries) I recommend them for the next time you're stranded somewhere for a week with no electricity or other people that require even occasional acknowledgement. Happy Reading!
2 comments: