How to Make a Six Year Old Really REALLY Mad...

You give away his Halloween candy while he's out trick or treating.  (The candy he got at Dad's work party which was much better and more plentiful than what he got Halloween night.)
What kind of mother would do such a thing?  The kind confronted with literal HORDES of Japanese trick or treaters who had been bused on to base.  (These pictures don't do justice to the waves of humanity lapping at my front door.)

I started out with probably 15 bags of candy.  It wasn't nearly enough.  We went through all of our candy (and Maxwell's) within the first hour.  After that, I was forced to turn off the porch light (and every other light in the house) and cower sheepishly in the darkness. 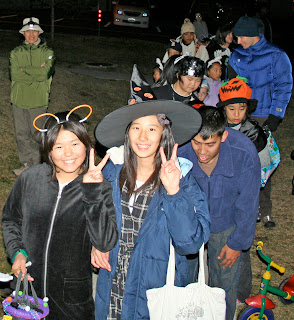 Oh well.  It was fun while it lasted.  I saw some of the cutest kids!!!  Many of the Japanese children had been practicing for days at school to learn how to say "Treeck oh Tah-reat", "Happy Harroween", and "Sank you bery much."  It was the cutest thing ever.  (And they were all impressed when I said 'you're welcome' in Japanese.)
Now I know that next year I'll need at least 30 bags to even be able to show my face Halloween night.  (But I'm afraid it's gonna be the cheap stuff.  I bought all yummy chocolate in case there was any left over...I wont make that mistake again.)
As for Max, Doug took him to the Commissary last night and he got to pick a bag of clearance Halloween M&M's.  So I've been forgiven and all is now right with the world.
Good thing Halloween only comes once a year!
See you tomorrow!
(Now go vote!)

Email ThisBlogThis!Share to TwitterShare to FacebookShare to Pinterest
Labels: Halloween, Living in Japan

Oh my gosh! They did the same thing here in Mexico City but they bussed in a lot of poor from the surrounding pueblos and neighborhoods into our neighborhood. I had no idea they even Trick or Treated here! (Um, Dia de los Muertos was what I thought it was all about here!) We haven't been in the house for very long so we were still unpacking boxes when the first trick or treaters showed up at 11am! We had NO candy! There were hoards of kids all day and throughout the night so we left early to our ward trunk or treat to escape. I'm with you, next year we will be ready!

Next Year we are hiding!!

You could also make your six year old eat blueberry pancakes in the laundry room if you want to make him mad... but that is a different story!

I'm laughing my butt off at the image of you cowering in the dark as hordes of trick or treaters mull around your yard.

That's crazy! Look at those lines!! I wish I could have shipped some of the candy my kids got to Max. It's been a major source of temptation around here and I'm afraid none of us have been very good at resisting.

Poor Max!! And WOW! That's a lot of trick or treaters! We had loads of candy left over! And I only bought two bags! Hmmm...

You should ask for a little extra to cover candy for your October BAH(I think that is the right acronym) next year!!! We only had 50 favor size jars of Play-doh and we had to give 2 to each kid just so we wouldn't have leftovers!

Wow, that's a lot of trick or treaters. We didn't get any, but I live in an apartment complex, and I think people avoid those because often people have no candy there.

I'm impressed you had as much candy as you did!