How I Met (and dated) Your Father -- Part III

"Hey, I'm going climbing with some friends this weekend, do you want to come?"

Me: "Um, YEAH! Let me get write down my number for you!" (as I leap towards the front desk to grab paper and pen.)
I went home happy!
Doug went home and called his friends to make arrangements to climb that weekend.
This was a Tuesday. On Wednesday, I got my first phone call from Doug. We made plans to climb on Friday. He would bring a friend and I would bring a friend.
Friday came. Doug arrived with his BFF Mike (a very nice guy who was planning on going to Law School) and picked up my BFF Anna and I in the car he shared with his brother Dave. (an old Taurus named "The Maroon Marauder")
Anna was actually dating her future husband Travis at the time but she came as a favor to me...and 'cause she loves climbing. (And Travis loves climbing. So I'm sure he totally understood. Right, Travis???)
***Unimportant Aside: As we were pulling away from The Old Mill, I saw something in the road and made Doug stop so I could grab it. It was a key chain of a cartoon character holding flowers behind his back. When you push his button, he blushes. The cartoon character's name is Doug. 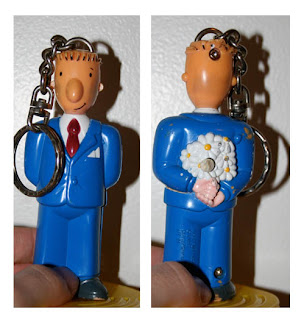 I found it ironic. I kept it. (I keep everything) He currently resides in my underwear drawer--He's happy there.***
Now, if you'll recall, because of my recent painful break up, I had determined that I wasn't going to care deeply about boys anymore. I wasn't going to try too hard, put on an act, or take myself--or dating--too seriously. I was just going to have fun. And I did.
We went up to Rock Canyon and while I waited my turn to climb, I made jokes and played in the dirt.
Here is my creation photographed by an amused Doug: 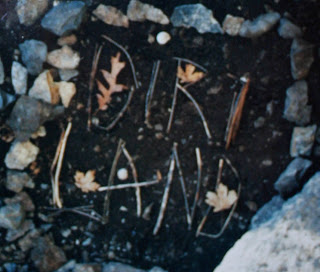 Here is my butt in a harness: 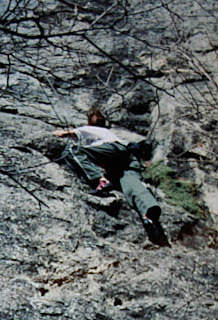 And here I am climbing:

Do I look hard core?
Because I am.
I'm super hard core.
Please note my casual attire. Baggy shirt and pants. Hair up in a twist. I was probably thinking derogatory thoughts about girls who get manicures while I climbed. ('Cept not you PB. You're still hard core even if you do have nice nails.)
The day was great. The climbing was great. Everyone was laughing and joking and having a good time. Everyone was relaxed and seemed happy. Mike knew Anna had a boyfriend, so there was no pressure there. They both seemed to have fun anyway. On the way back to the car, we started talking about food. I mentioned that I was going to a dessert party at Wendy's that weekend. I jokingly invited Doug and Mike to come. Doug said okay!
As we continued to walk, Doug asked me if I had plans for that night! Now, it was a Friday night. If I were following "The Rules", I wouldn't have accepted a date on such short notice. But I'd decided not to play games. I didn't have plans, and I was happy at the prospect that our date would continue.
He took me home and arranged to come back a few hours later.
When he picked me up, our first stop was a little hole in the wall (basement) sandwich shop in Provo called Gandolfo's. If you've been there, you know it's awesome. It's a local favorite and is always packed.
While we waited in line, I blew the wrapper off of my straw and hit Doug in the face with it. When we got our food, Doug asked the cashier "Do you take American?" while holding out his money. (I laughed. She stared in confusion.)
Yes, this is the foundation upon which we built our eternal relationship: Dirt Land, straw wrappers, and general silliness.
Next stop was the local bowling alley where we reconnected with Mike and some of his female friends.
(I probably bowled between 60-70. I stink at bowling. I usually get one or two strikes and 5 or 6 gutter balls. That's just how I roll. (pun intended.))
Last stop was a typical last stop for Provo dates: Village Inn for dessert. Of course, even though it was late, it was packed. While we waited for a table, I made myself comfortable by sitting on Doug's lap. I say the rest of the seats were taken. He says I'm a brazen hussy.
Tomayto, Tomahto!
During dessert I continued to sweep Doug off his feet by dumping a packet of sugar onto my tongue and blowing it at him starting a sugar-spitting-fight.
It's hard to be as mature as I am.
It's a real burden.
That night, Doug dropped me off precisely at midnight.

(Did you know BYU students have to sign an Honor Code in order to attend school there? They do. And it includes a 12 o'clock curfew. Doug was one of the only guys I ever dated who actually kept curfew. I couldn't help but be impressed.***)
He gave me a hug at the door. I don't want to brag, but it was a pretty darn good hug.
You might think after my earlier performance I wouldn't get asked on a second date. You obviously underestimate my hugging ability...
To Be Continued...
(yet again.)

***Alright, alright Zoobies! I stand corrected! The curfew meant that the opposite s-e-x had to be kicked out by midnight (or 1:30 on Friday). Which means I had probably invited him in and he declined and THAT'S why I was impressed. Anyway, you get my drift...!


This--for you non-BYU-alumni out there--should give you further insight as to why the Provo Denny's and Village Inn were always packed in the middle of the night. CURFEW!

Email ThisBlogThis!Share to TwitterShare to FacebookShare to Pinterest
Labels: Gratuitous History, The Soap Opera of My Life

Great story! And great pictures. I have to note that you guys haven't changed a bit. Now you just have three kids to be silly with! Love you guys!

You are hard core Emily. I think its because you were wearing my pants (that's why they were baggy, because they were mine). Love the story. I think this was the time that Doug was belaying me and I fell 25 feet while trying to clip the chains. I smacked right into the slabby wall. Thanks a lot DOUG! But you married Emily so I guess that makes up for it. :)

Who knew you used to be a ho!!! Seriously, his lap on the first date? That is unbelievable considering your brother was a prude!!!!

Well I am just kidding. About you that is, your brother WAS a prude, and since I was 'forward' as he puts it, I kinda noticed.

Really I won't tell you what he called me, it wasn't as nice as a hussy.

I love the little Doug keychain, and the irony behind it is AWESOME!!!

First, I cannot believe you have that keychain in Japan.

Second, Gandolfo's was my favorite spot. They opened one here but all the sandwiches were soggy yuck and they quickly went out of business. So sad.

Third, the BYU Honor Code curfew rule is about being in opposite sex apartments after midnight, or 1:30 am on Fridays, not about being out after midnight. (I just looked it up because I thought I'd been in violation for 4 years and got nervous. Like Doug, I am a rule abider. I am also a big nerd who googles honor code rules to leave blog comments.)

I always thought (as a BYU grad) that the curfew just meant that I couldn't have boys in my apartment after midnight....mmmm....I must have broken the HOnor Code every weekend in that case....

I love how people met stories; they're all so different. And yet you know that you can enjoy them, because you know they'll get together in the end.

You are so funny! I love your stories & yet I don't think I have heard this one so I'm very anxious to read more! Oh, & as I'm reading this I am totally picturing you with that sugar! You are too fun! Miss you!

1) I love you.
2) Don't be freaked out by number 1.
3) I am awesome.
4) OK seriously. I am so glad I asked you to write about this. You are a pretty good story teller and I love every word of this courtship story. I guess it makes it better because you know how it ends but I seriously love it.I love that he took you out again after the sugar blowing and the lap sitting. How awesome!

Sorry hope you don't mind my commenting. Guess if you do you can delete it. hehe.

I knew Doug way back when. . . back when he was 'in pre-mission like' with a very mature (serious) and wonderful girlfriend of mine. Then we all grew up and went different directions. So that is the only Doug I know. But I find this wonderful all-is-right-with-the world delight that he met and married someone as screamin hilarious, flirtatious and fun-loving as you are . . . as he is . . .as you both are.

Retep told me to read your blog and he was right. You're very fun to read. But I love seeing sparks of the Doug that I loved a long time ago (totally friendship love btw) in the stories that you tell. It is awesome that you two found each other and he gets the fun and hilarious wife he deserves.

I'm loving your story! Can't wait to read the rest!

suspense keeps me waiting for more! you entertain me! I love to read your blog.

I said "probably" going to go climbing with some friends. I don't lie.

You also lit matches on fire and threw them at me at the sev.

Plus how could I not dig you when I got to stare at your rear while you climbed!