*Not much new to report today.  The base is under strict instructions to limit power as much as possible: Five minute showers, one load of laundry per day, lights out during the day time, only one major appliance on at a time, etc.

*Doug was at work full time today but didn't get much work done.  He said what may impede them getting back to seeing patients as usual is not having laundry capability at the hospital which is still running on generators.  No clean scrubs=no seeing patients!

*The schools also don't have power so no school for the kids tomorrow either.  (This week was supposed to be when 3rd grade and up did "Terra Nova" standardized testing.  Max is thrilled to be missing school.)

*When Doug came home for lunch today, he grabbed Max and our neighbor Thomas.  They went and picked up the clothing collected by church members and took it to the middle school gym. 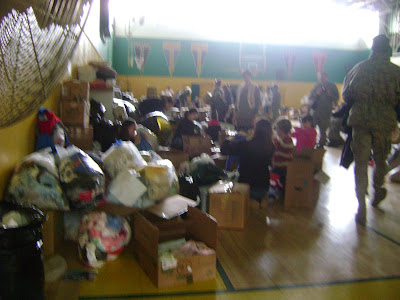 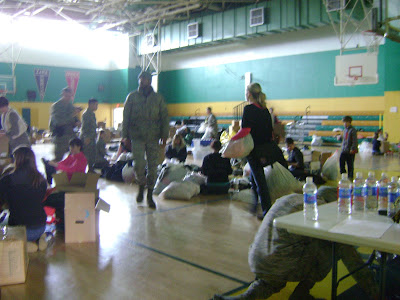 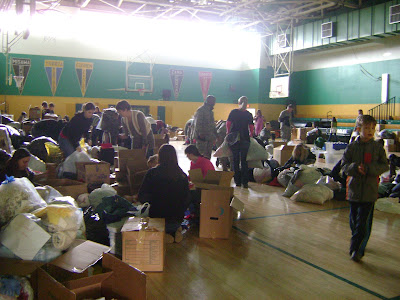 *Clearly, the people of Misawa are awesome and generous despite the emotional upheaval of the last few days.  Evidently they had to stop collecting donations for a time because they were getting SO MUCH and didn't have a distribution system set up.  But that was remedied and arranged and collections were continued.
*I heard tonight that the Fitness Center on-base is housing some refugees.  They aren't allowed to leave the building un-escorted (or the base at all) so a neighbor of mine is trying to arrange for people to host and feed them in our homes.  More on that when I know more.
*We're in a very strange state of limbo right now.  Doug is back at work (not working)...but the kids aren't back at school.  The power is on...but it might go off at any time.  The earthquakes and aftershocks keep coming...yet no one really pays attention to them now.  Things here seem relatively normal...and yet nothing is the same.  It's a little a lot stressful!

*We appreciate all of your prayers, love and concern.  Keep 'em coming.  It's means a lot that people are thinking and worrying about us.

*Again, at this time they are not asking for people to mail things from the states.  The best way to help is to donate money.  I don't know much about which charities are trying to help, but I do know the L.D.S. church IS, and that 100% of your donation goes directly to the recovery effort.  None is used for overhead.  Also, I know the Red Cross is already established here on-base and already helping.

*On his way up to bed, Doug noticed there is an inch of new snow on the ground.  It's going to be a cold night for those without adequate shelter or heat!

Email ThisBlogThis!Share to TwitterShare to FacebookShare to Pinterest
Labels: Recovery Efforts for the Japanese People

Thanks for the updates; I especially love to read about what everyone is doing to help. I hope and pray life for everyone gets back to as close to normal as is possible as soon as possible. Here is a list of some other charities http://www.charitynavigator.org/index.cfm?bay=content.view&cpid=1221 (but they don't use 100% of donations for relief efforts like LDS Philanthropies does).

Thank you for all your updates. They are very informative and helpful to our understanding of how bad it all is and also what we all should be doing to better prepare. Any LDS (Mormon) Bishop will accept money donations marked "Humanitarian Aid-Japan" or simply "Japan" and 100% of $$ will go to help those in Japan, to anyone and everyone regardless of their faith. Your Blog is being circulated thoughout the states and on Face Book. God Bless all there.
DSC

Emily, my heart is breaking for the people of Japan. I'm amazed at how quickly your branch was able to gather supplies to share with neighboring communities. I pray for you daily, and hope that things will be back to some semblance of "normal" very soon. Love you!

wow emily, you are ALL in our prayers. thank you for the valuable information... it makes me want to reflect on our own situation and prepare better. one more thing, i can't tell you how many times i've threatened to call the police when my kids are super naughty and your story tugged at my heart and cracked me up... you're an amazing mother!:)

I just clicked over from Leslie's blog and am grateful for your updates and insights. I'll be linking over here today, too. Stay safe!

Wow Em! So glad you and your family are ok! Thank you for sharing your experiences! As we watch the news here and then add them with your reality, we feel so empathetic for the people of Japan! God bless!

I live for these updates, Em, so keep them coming. I was in a major earthquake in El Salvador and can relate to those alternating feelings of normalcy and totally panic. Of course, we didn't have a tsunami or radiation to complicate matters.

Anyway, our prayers are with you, of course. I imagine it will all be surreal until you come back this summer.

(p.s. My verification code is "suicide." Is that appropriate?)

Hi! My name is Beth Fullerton and I live in a suburb of Dallas, TX. A friend of my oldest daughter sent your blog link to us. My middle daughter has been living in Sendai for the last year and was a teacher at the Meysen Academy in Sendai when the eathquake occurred. Her school brought them to Misawa Air Force Base a couple of days ago. She is one of the refugees you mentioned in your blog who is housed at the fitness center! Her name is Melanie Fullerton. I would LOVE LOVE LOVE it if you had a chance to go and see her and tell her that we love her and are praying for her and her friends. We have had some contact with her since she has been at Misawa. But you know some is not enough for a mom at a time like this. My email is ebf_57@yahoo.com. Thanks for any help that you may be able to offer. We are praying for all of you there in Japan!

LaLa said...
This comment has been removed by the author.
2:22 PM

Hi, my name is Deb Heinrich. I am another mother of one of the refugees that Beth Fullerton has mentioned. My daughter is Kelsey Heinrich and if possible could you please find her and give her a HUGE HUG from her momma!!!
Thank you so much and know that prayers are being lifted up from Carlsbad NM, and all over the US for all of you in Japan.

hi just found your blog from 'a room somewhere'. it's been so great to read all your insights about food storage and things to have in an emergency.
I hope you don't mind that I've put a link to your blog from mine.
Your family & all the people of Japan are in our prayers!
love, from an Army wife in Utah

Loving the updates. They gave me lots of motivation to work on my food storage, etc. this weekend.

Give my sweet nephews a kiss from me.
xo

I love your blog; keep up the good work!

I was sent your blog by a friend, you don't know me, but your blog brings great peace to my family. My husband served his mission in Sendai, and we have been sick with grief as we have watched for the people we love so much from so far away! We feel so helpless! We are so worried for our brothers and sisters. Thank you for doing when we wish so much to be there helping as well! We will do our part from here. Thank you for doing yours over there!
Alicia