Preparing to be Prepared

On 3-11-11, the first thing I did when the shaking stopped was go to my upstairs walk-in hall closet.  For some reason, a few days earlier, I had randomly noticed and made a mental note that we had one of our (five) 72-hour kits on a shelf by the luggage.

I walked into the dark (no power) closet, and without needing to search, grabbed the boxed kit, and took it downstairs to be placed by the front door.  (Where it stayed for the next two weeks.)

My next task (after talking to the boys and assessing damage) was to look for the "Can Safe".

Ever seen one of these? 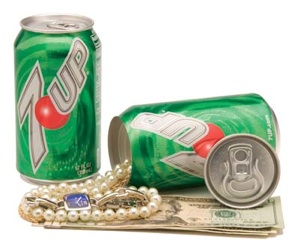 This is where we keep our emergency cash: dollars AND yen.*  (No pearls or ugly watches, unfortunately.)  This isn't cash for an emergency pizza craving.  We NE-VER take money out of it.  This is cash to have on-hand in case something happens like--say--an earthquake that knocks out the power in an entire city rendering all ATM's useless and making it so stores only accept cash because credit card machines don't work.

We were at the beginning of just such an emergency and I wanted my Can Safe handy.  Unfortunately, I couldn't find it.  I started pulling out cans, and then more cans, and then even more cans. (By now I had a flashlight to help me.  (Still no power.  Dark pantry.)  I still hadn't found it when Doug came home and was quite frantic.  I started worrying I'd given it or somehow thrown it away.  I was NOT a happy camper.  But I went back, looked again, and FINALLY found it.  I pulled it out and put it by the door.

In addition to the "box" 72-hour kit, (gift from parents?) we have two backpacks which make up 72-hour kits for 4 people.  We had these in our locked, backyard storage closet.  Not handy, but I did know right where they were.  (Now they're in the front closet by the door.) 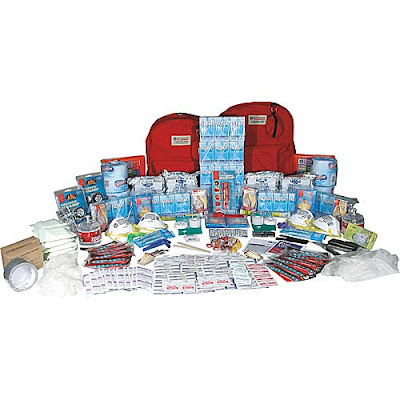 We bought these while we were still in Dental School in San Francisco in case of--ya know--an earthquake.  We got them from Emergency Essentials and when we dug through them the other day, we realized they have some pretty good stuff in them but really unappealing "food".  (Energy bar chunks of some sort...my boys would probably starve first.)  We'll be fixing that by adding some better food and a few additional things like kid-medicine, clothing, and diapers.

SO, my point here is this:  We were (are) in pretty good shape when it comes to disaster preparedness.  We have 72 hour kits for 5 people.  We have plenty of stored food and water, batteries and flashlights.  (and now diapers.) However, there were a few things we could have used and things we could have done better.

And that's the case for most of us up here.  With that in mind, I'm going to start publishing a guest post from someone in Misawa every Monday.  So you can hear what some other people experienced and wished they had, etc.

In the mean time, this is what I ordered from Amazon today...
Two of these:

(Max and Sam can hang them from their necks and they don't have a concentrated beam to SHINE DIRECTLY IN PEOPLE'S EYES!  Have I mentioned that kids are still annoying during disasters?  THEY ARE!)


And two of these:

They do require batteries, but according to the Amazon reviews, they work well and the bulbs last forever.  No propane required.  (I can save it to use with my cook stove.)  Also, I wont have to worry about candles tipping over!  (But I do have lots of candles now just in case!)

Next disaster, I'll be that much more prepared.


*FYI:  In case you want to rob me and empty my can safe:  Good luck!  Mormon's believe in having food storage.  I have a whole PANTRY filled with cans!  You'd have to use the money you steal to pay for your carpal tunnel therapy after opening 1,563 cans of beans, peaches, and sweet corn!

Hi Emily,
I'm a new reader in Utah, and I'm hoping you can post the links to your amazon flashlight finds...I can't seem to locate the same ones. I really appreciate all of your emergency/preparedness advice with us. My prayers are with you and the people in Japan.
thanks,
Laura

Wouldn't it be a bummer if the babysitter popped open your can of 7-Up...errr...hundreds of dollar bills?!?
I know what your secret stash can is though. Mine used to be a can of Cream of Potato soup then I worried one of the kids might throw it into the bag for the community food drive.
P.S. Glad you finally got some decent flashlights! Now put some good food in your 72 hour kits for my poor nephews! Granola bars, beef jerkey, fruit leather, trail mix, peanut butter and yes, plenty of treats and/or chocolate!

Emily,
I'm so glad facebook links to your blog. It is so good to read about what you recommend for preparedness. I want to order those flashlights/lanterns from amazon. Great ideas!

Okay, I posted the links for the lanterns I bought. I did look at about a million different options and read a bunch of reviews and these two both seemed like good ones!

Such great and practical information; thank you!

HAHAHAhahahaha! kids ARE still annoying! Flashlights are not toys!! THEY"RE FOR SURVIVAL!!! No wonder it was such a stressfull situation . . . you don't want to freak the kids out but you don't want to be left in the dark (literally).

PS. The power bars in my 72 hour kit expired in 2007. They were neither delicious or nutritious.

thank you for the links! I'm glad to use your research. Have a good day.

No I don't work for Mountain house. I've just found they're a better value than cheap snack food.

Emily,
I am a friend of LIz's and Janeen's from their Philly days, and headed over to your blog to check out the earthquake updates (and of course Merrill's homecoming story.)
Anyways, I have to teach a rs lesson on emergency preparedness and remembered your monday preparedness posts - they will be a great resource!
Thanks so much.