Cleaning Up The Mess

Nothing like a little good, clean (extremely dirty) volunteer work to get you out of your funk when you're (me) sitting around feeling sorry for yourself.  (myself)
Yesterday morning I shoved Max and Sam out the door for school (about 10 minutes too early), and grabbed half-awake, half-dressed Gabe and Gray, threw a bunch of stuff in a back pack, piled on a bunch of snow clothes, and rushed up to "Miss Janeen's" house.   A very kind lady from church, Sister (Natalie) S. and friend Debbie, had offered to watch my two little ones, Janeen's two little ones, and Lyana's one little one so we could volunteer for the Red Cross doing clean-up for the day.
We left the kiddies at Janeen's and went to "The Mokuteki" on base.  (Casual dining/auditorium/game room and current Red Cross base of operations.)
First we got briefed on what to do and what to expect:
"Be careful.  Don't wander off alone.  Be respectful of the Japanese.  Don't step on rusty nails.  Don't saw your hand off. Stay hydrated, but be aware there are no toilets to use..."
Stuff like that.
We were told we would be going to two locations.  First the beach, then a pig farm.  The pig farm was in desperate need of our help, but was covered in snow.  They wanted to give it a few hours to melt before we went there.

So we went to the Misawa beach first.
We were told that our main job was to dis-entangle the fishing nets from the trees.  We were told that the nets were worth tens of thousands of dollars and the fishermen wanted us to salvage all they could.
When we got there though, it turned out to be a little harder than expected.  The nets were super heavy and completely tangled in the trees.  We ended up trying to find smaller debris to drag into piles. 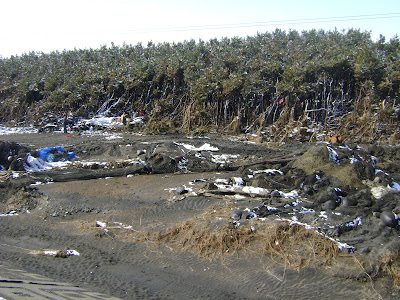 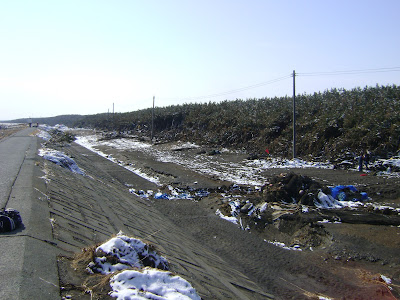 Whatever this thing is, it would grab the net, and then start backing up.  Sometimes the nets were so tangled the tires would spin.  Sometimes it would uproot a whole tree.

The first line of trees was flattened.  The next few rows were just stripped of branches and greenery up to almost their tops.  We found this boat surrounded by twisted metal quite a way in from the shore. 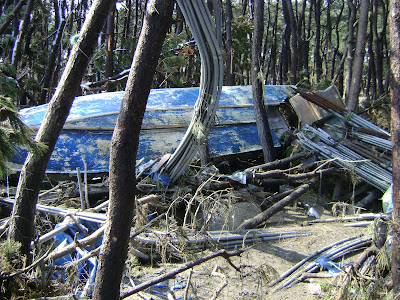 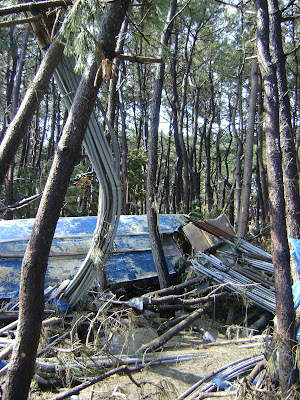 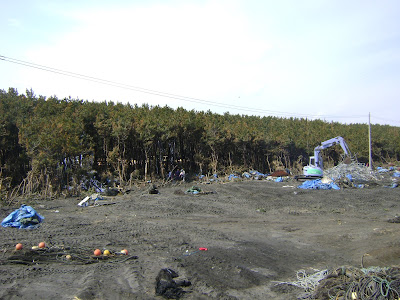 Next stop:  The pig farm!  (I wasn't excited about this one, but that's not exactly the point, is it?!)
Whatever was sitting on this site was leveled.  I don't know what kind of shape it was in before, but the tsunami definitely finished it off.  It also drown a whole barn full of pigs. (thousands.)  (The building below left in the picture.) 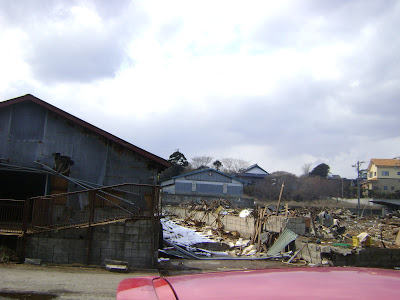 We were told all the pig carcasses had already been cleared out the previous few days, but they pulled out at least three while we were there.  It wasn't pretty.
The goal on our particular day was to wade through the muck to try to pull out the metal.  Most of which was in the form of re-bar or tin-roofing.  It was hard, dirty, and overwhelming work.  (And a little frightening because you didn't know what you were about to uncover or if you were about to fall into a hole in the muck.)
It was pretty daunting.  And as I mentioned, overwhelming.  But I worked along side friends and we told ourselves that it was making a difference.  Even if it was just a tiny one.

We only worked until about two but I was completely spent by the time I got home.
That night we had the H family for dinner as usual.  Their days here are numbered so we've had them over every night for the past...week?  Two weeks?  I can't keep track of time any more.  The last ?16? days have been the longest of my life.  But we want to see them as much as possible before they head state-side.
When they left, I fell asleep on the couch.  (I can't really remember much of the evening...maybe I fell asleep before they left?  I hope not.)  I do know that all night I had nightmares that I was back at the farm and we uncovered a buried cistern or cavern, opened it, and let out some horrible disease.  And we were all standing around wondering if we'd already been exposed and if it was too late...yuck.
BUT, that wasn't so bad.
The worst part of the whole experience, was looking at the mess and knowing there are whole towns and cities down south that look like this.  Not very far from where we are.  And that what we do here is just a drop in the bucket.
This is all still so unbelievable to me.
The BEST part was feeling like I was doing something to help.  Even if it was just a TINY something.  (And believe me when I say I didn't have a self-centered thought or self-pitiying feeling all day.   Nothing like seeing what people have lost to remind you of what you still have.)
SO!  I will go again.
And I will add another drop to the bucket.
---
Now it's 2a.m. Sunday morning.
Time to say goodnight!

God bless you and all the volunteers who are doing "a tiny bit" to help in the cleanup. And thanks Em for continuing to blog to keep things as they really are in the forefront of our minds. Personally, if I am tempted to buy something for myself, I remember that I committed to donate an equal amount to the recovery effort in Japan (over and above my monthly contribution.) You are doubly serving by your actions, and also by spreading the word via your blog. You are a blessing.

I'm glad you could help out, if only so I can live vicariously through your do-gooding. (And I find it so serendipitous that Natalie was able to watch your kiddos. She watched Eden when I was having Imogene. Send her our love. We tack on the S's to our prayers for you guys each night.)

I can't tell you how many people have emailed me asking, "Are you related to that Emily in Japan?" Not quite the way you wanted to drive your blog traffic, I'm sure, but you are definitely a blog celeb these days for the right reasons.

Keep on keeping on!

It's overwhelming, the amount of loss and devastation. Your spirit and goodness are a ray of light in this time of darkness.

It may frighten Mrs. Dub to know she just quoted Dad. "Keep on keeping on!" was always one of his sayings! Maybe it comes from a higher source that I'm not aware of - Churchill or David? Nonetheless, I agree. Just keep doing your one small drop in the bucket by helping the Red Cross, taking care of yourself, family, home and neighbors. Those are huge drops even though they seem small. I was again so humbled by the pictures and stories you shared. So many of us wish we could help so many of you.

Emmy...you are amazing and I love you!!!

You are a brave soul. Stateside, the last report was that 150,000 people from Japan have entered the US. We're seeing them every now and again, at nice hotels, with their crazy styles. I saw a girl with a gingham jacket, over a different gingham patterned shirt, with a black skirt and a 4 inch straw hat on the side of her head. Definitely Tokyo. I'm guessing the first ones out were the wealthy ones. You can always tell because of the clothes, super nice but pretty outlandish.

I am just a random stranger, but I have been reading your blog. I am inspired by your willingness to help. I think that staying home & watching the kids would have been the easy duty (for once).

Thank you for sharing! I am Ginger Anderton's Aunt. It is great to hear first hand from someone down in the trenches. We will continue to pray.