Hachinohe is the nearest "big city" to us here in Misawa.  It's where the good recycle shops, Toy's R Us and the fabric store are.  Where to go if you want a 4-D ultrasound or Cello lessons or great rock climbing right next to the ocean.

And it was hit pretty hard by a huge Tsunami.  Unfortunately for the locals, a lot of the resources were diverted or sent to Sendai leaving Hach short.   Most Japanese people live in pretty tight quarters and don't have excess food storage, so not being able to shop frequently is a problem.  And apparently the grocery stores are now empty.

On Sunday, Pres. B. announced in church that we would be collecting supplies to take to Hach. 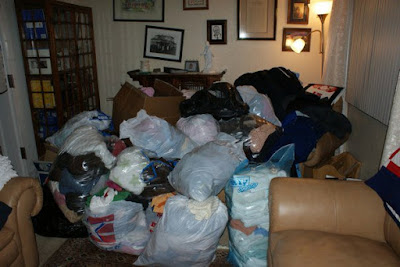 Misawa Mormons were asked to donate food and warm blankets.   (And many of our friends and neighbors donated too.) 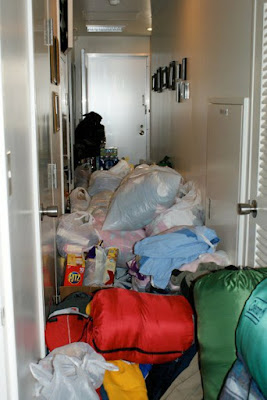 Tonight Doug went with some other branch members (including some of the youth) and took the donations to the L.D.S. church building in Hachinohe. 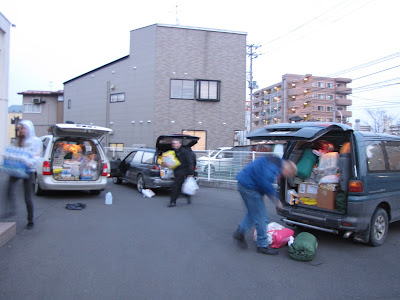 This is the e-mail I got tonight:

Misawa Branch Members-
Thank you! Thank you! Thank you!!! I am so humbled to have seen the amazing outpouring of charity demonstrated by you all. This evening we loaded up in THREE VEHICLES all the food, blankets and sleeping bags collected over the past 30 hours and delivered them to the Hachinohe Branch President. He was amazed! He was so humble and grateful for all that you shared. It is an experience that I will never forget! He said that it is enough food to last a very long time! He said he would share it with families and friends who will need it over the next days to weeks. We still have TWO VEHICLES full of clothing. We plan on donating these to the local Jr/Sr High School/Red Cross humanitarian drive.
I can't thank you enough!  --President B. 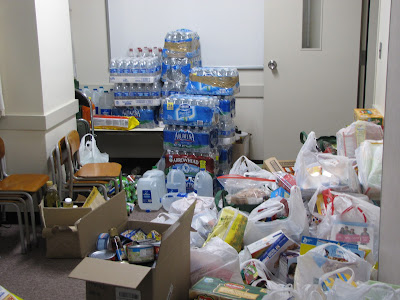 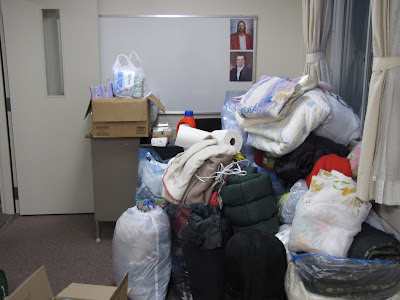 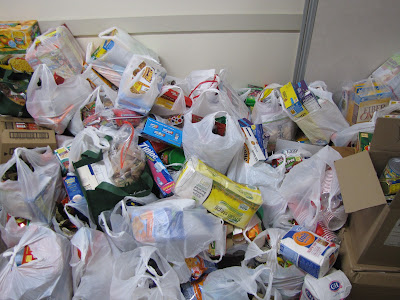 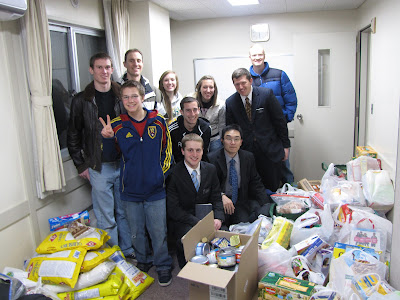 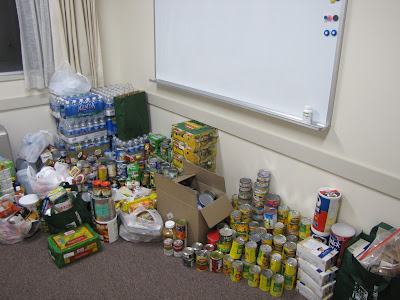 Email ThisBlogThis!Share to TwitterShare to FacebookShare to Pinterest
Labels: Earthquake update from Misawa

Wow. Yet another testimony of why we follow the prophet. We may not need it ... but how wonderful in the days after a major crisis to be in a position to give to others! This is beautiful.

Wow, that is awesome! Interesting that they consider it "hoarding" to have supplies or food and stuff. Praying for you guys and thankful that there are people like you guys who can help!!!

We lived in Misawa in the early 80's. It is just so heart wrenching to see the devastation of Japan... one of the loveliest countries in the world. Our prayers are with you all....

Emily, I'm one of Janeen Alley's friends/fans/sort-of-sister. I am inspired by how generous your branch was an how blessed that branch is because people had things on hand to give to others. I have been reading the accounts in disbelief, looking through the photos in shock--I feel like I've been choked-up with emotion for three days. But I was really moved to tears seeing what was donated. What a humbling situation to be a part of.

hi! it's been a while since i posted on here, and now i don't even have the blog when you posted on mine! (does this make sense??)

anyway, wanted to let you know that i've been sharing links to your blog on FB. especially this last one. wish we could do more than just give money. at least we can do that, right?? thanks for the updates and pictures.

I found your blog through Segulla, and was riveted to your posts about what have gone on there. Thank you for the insider's view to the challenges you and the Japanese people are facing. We will be praying for all of you over there. Thank you again and my God bless you!

This is all just unbelievable. I'm so glad you guys are safe and well. I can't believe all the devastation. I'm so greatful for all your tips to better prepare for emergencies. When do you guys come back here?

So proud of you and your branch and the amazing amount of help they are giving your Hoch... neighbors. Just spent an hour plus with Anderson Cooper and feel so grateful you are safe. So many of us are so overwhelmed by the devastation of your land and lives. The pictures are tragic. We're sending constant prayers of gratitude for your protection and asking Father to send solace and comfort for those whose lives have been destroyed or displaced. Keep those tips coming for those of us trying to get with it and be ready for our future events.

Thank you for sharing your experiences. I love that you are sharing your preparedness to help those around you. I really believe helping others is a major reason why the prophets have counseled us to prepare.

Also, I wanted to let you know that I've featured this post and "Surviving the Earthquake in Japan" on my LDS-based preparedness blog (based on a recommendation from Polliwog).

Thank you for your wonderful example!

Wonderful blog! I was so happy to get a first hand account of what is happening in Japan from an LDS point of view. Aren't we blessed to have priesthood leadership that encourages such preparedness? thank you for all you do for others. (I found this blog at iprepared.com, so glad I did!)

We visited some friends in Hachinohe a few years ago. Our friends had a plane to catch, so they dropped us off at church there. Though we were late, and unknown, and gaijin, the ward was very friendly. They invited us to pose in a ward photo. Someone gave us a ride after church, and someone else provided a bag of snacks.

So I'd like to thank you for helping those kind brothers and sisters, and the many others whom you've been serving!