For Mother's Day, Dale and Claudia sent me a package which included the book, The Sneaky Chef by Missy Lapine. Maybe you've heard of it? (or the similar book written by Jessica Seinfeld?)

I was excited to get it because I've heard a lot of good things about it. As I started reading, I found that I really like her philosophy on food.

To sum up, she's a believer in moderation. She thinks you can help your kids eat healthier without completely transforming them in to health nuts. She concedes that kids (and adults) like junk food but we can work with that. 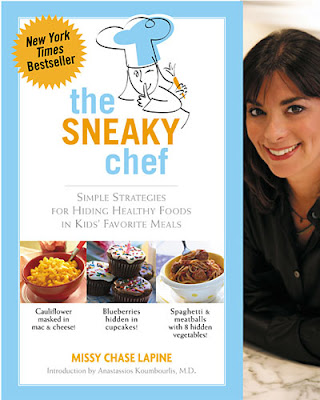 We've got two pretty-darn-picky eaters in my house. Without various forms of junk food, my boys would have perished long ago. One son whom I wont name (but who's name rhymes with Paxfell) has the amazing ability to gag himself if he doesn't like what he's eating and isn't afraid to just up and puke right at the table. (Fortunately, he's growing out of this habit!)

This is how we get through the day:
For Breakfast the boys have a choice of Non-sugary Cereal or plain Instant Oatmeal. (They like it, alright!?!?!) No fruit juice for this family of Hyper-Hypo's!!! (Doug is the exception to the sugar cereal rule. When we were first married, I mixed regular Cheerios into his Honey Nut Cheerios on two separate occasions. The first time, he was annoyed. The second time was the closest he's ever gotten to saying "the D word".)

For Lunch: Peanut Butter and Honey on Whole Wheat. (I like Pepperidge Farms NATURAL because it has no High Fructose Corn Syrup...which I will happily eat in candy and desserts but take issue with having in my bread and apple sauce.)
OR some kind of convenience food like Corn dogs, Dino Nuggets, Taquitos or Mac and Cheese.
(Did you know they make whole wheat Corn Dogs?!?!?!?!?!?!?! AWESOME!!! My kids didn't even notice!!!!!)

Dinner is where we try to force in some real nutrition. The boys eat whatever we're having (which always includes some sort of protein and a veggie) but NEVER without protest!!!

Most of the time, I feel the most guilty about lunch. At dinner, guilt is replaced with stress and frustration as we try to bribe, force or cajole our kids into eating the main course. After which I'm left to wonder if we're just making the pickiness problem worse.

That's why I'm excited about this cookbook! I'm hoping I can lose some of the guilt and stress without adding too much additional work.

I'll tell you about our first try with one of the recipes tomorrow. But first, you tell ME about the eating habits of your kids! What are you doing right? What could you be doing better?

Do tell. I need all the help I can get!

I sometimes bribe my kids with ice cream. I figure a little protein & veggies for a scoop of calcium & sugar is a fair trade-off. Or, when David won't be home for dinner, I take the path of least resistance and let them eat whatever they want. :)

Emily,
so Faezer came over the other night and when she saw me making sandwiches for my kids she noticed that I didn't have any white bread in the house and thought this very ODD (for me!)

I seriously have NEVER brought white bread since you guilted me into wheat at WDW.

You should feel like a proud mama' at this point.

btw... I still can't eat it, but i don't want to be a bad influence, so i just eat something else when my fam has sandwiches, as opposed to buying even an ounce of white bread.

I was going to be the best mom and get up every morning and make my kids something besides cereal-- I made it a week.... I don't let them have sugary cereal except in the summer. I try to pack them good lunches but they always come home with the sandwitch uneaten or the applesauce not opened. Dinner is "you eat it or your getting it for breakfast!!" It will get better as they getter older. Addison used to be picky but now will atleast try it. Wesltey will eat ANYTHING with ranch. Good luck- can't wait to hear about your new cookbook.

The following is completely off-topic.

Are you aware of your beloved John Cusack's political leanings? Did you know he contributes to The Huffington Post?

Mins,
I had my suspicions so I never delved too deeply. Thanks for nothin'.

P.S. I forgive him 'cause he's so stinkin' sexy.

so, i want to know, do you use the recipes on your husband and not tell him? let us know!!!