A Delicious Surprise and A GIVEAWAY

See, this is why it always pays to enter Giveaways.  Even if they're on the blogs of people you don't know.  Even if you don't think you have a snowball's chance.  Because sometimes, even if you DON'T win, you might just get a PRIZE anyway!

A few weeks ago I was reading Noelle's blog: "Because Nice Matters" and she was talking about the new Stephen's Caramel Apple Cider.  She liked it so much she decided to do a random giveaway.  And I didn't win.  BUT, being the kind and generous soul that she is, she took pity on me in my Stephen's-less state and awarded me a PITY PRIZE!  And I just got the goods in the mail!  (TWO cans of Stephen's and some M&M's!!!  Noelle, we're clearly kindred spirits!)  (I was forced to purchase the Reddi-Wip and Smuckers JUST for the cider.  FORCED!) 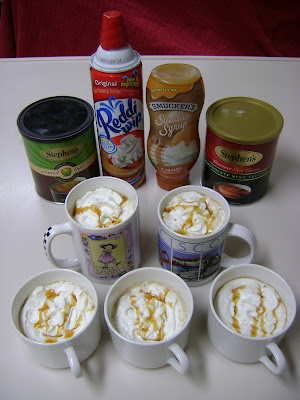 Dear Noelle,
You really ARE nice.  I thank you, my husband thanks you, and my children thank you.  You're getting a treat from Japan.  (Sometime in the next nine months.  I'm not quite as efficient about getting to the post office.)
You rock!  Thank you again from the bottom of my freezing little toes!


And since I'm already going to the post office, and it IS ThanksGIVING week, why don't I do a giveaway too!  All you have to do to enter is become a "follower" of this blog.  (If you're already following, you're already entered!  Good work!)  I'll select someone at random and send you a treat from Japan!  Hooray!  The prize will be awarded...in a few days.  So ENTER NOW!!!


P.S.  Am I the only one who grew up saying "carmel"?  I always feel so pretentious saying "caramel"!

Email ThisBlogThis!Share to TwitterShare to FacebookShare to Pinterest
Labels: giveaways, Thanks Giving

I found the caramel apple cider at our grocery store here in California and almost did the happy dance!! I was so excited! What a nice friend you have!

That looks so yummy! Carmel vs. Caramel is an on going debate in our household. I'm on the side of carmel.

All my western friends rave about Stephen's drinks, but I don't have them where I live.

And I say carmel. It seems to hoity-toity to say it the other way, but it does look fancier.

I say "carmel" too. Happy Thanksgiving!