Jim 'n Nick's Bar-B-Q: It's not just for Baptist's anymore!

As a Mormon, I believe in "keeping the Sabbath Day holy". This has many different implications and interpretations, but for most Mormons it means (among many other things,) that usually we don't eat-out, or shop, or work, (or do anything too raucous) on Sundays. I say "usually", but in my family, I mean we never eat-out on Sunday. Ever.
Except for this last Sunday. Because I was in Alabama visiting Doug and didn't have enough food in the hotel room to feed us all. (Because I barely made it out Ang's door and into the car with my kids and sanity intact on Saturday and therefore didn't plan ahead and buy groceries for the next day.) (I also didn't know the hotel had a kitchen with fridge until I got there.)

Anyway, that's how come Sunday afternoon after attending a local L.D.S. church, we found ourselves in the highly unusual situation of being in a restaurant--

--with a BUNCH o' Baptists. I would even go so far as to say there was a plethora of Baptists! We were surrounded and got to hear re-caps of some of the sermons! (Alabama has Baptist churches like Utah has Mormon churches! i.e. LOTS of them!) 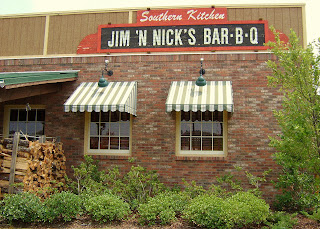 We chose this particular restaurant because;
a) it said "Southern Kitchen" on the sign above the name and I figured since we're in the South we should experience some southern cooking, and
b) because the parking lot was FULL! Which is always a good sign especially when you're on a street with 50 other different dining options. Which we were.

Well, we were not disappointed. The food was great, the portions were HUGE, (enough to provide dinner as well) and the service was very friendly AND accommodating. 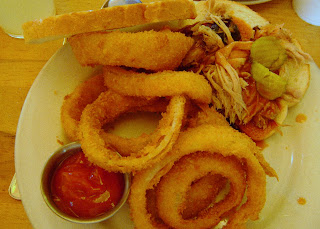 So accommodating, that when Doug asked the server about "the BBQ pit" in the back, he (the server) arranged with the manager for us to have a tour. A very nice chef met us in the back and showed us around.

This thing is a ginormous rotisserie: (This one had chicken on it. The other one had pork and beef on it.) 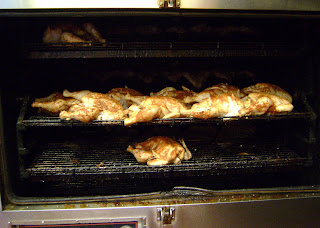 This is where they add wood to the humongo smoker: 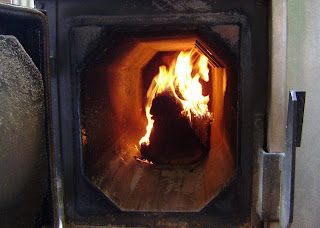 It was a really neat tour! I guess there is such a thing as Southern Hospitality after all!

Oh, and thanks for hangin' with us, Baptist's! It wouldn't have been the same without you!

Your post about having boys cracked me up! My son also has the chomp shirt that all your boys are in!

shame, shame, everybody knows your name! And hey, what is that stuff next to the onion rings?!?

That's my Pulled Pork BBQ Sandwich. It has pickles on it in the picture, but they were SWIFTLY removed and disposed of.

Yummy! I have never been to Alabama, or experienced anything Southern.

If you were any kind of good SIL you would send me a doggy bag!

No real dogs though! Even though that has become a source of discussion on my blog!

And I went back last night and it was good. Plus, Bobbi the petite little server kept calling me sweetie!!!!