He's an Airman, not a Soldier

I'm not gonna lie. It's been a bloody long day. (If you're new to this blog, you should know that I don't count swearing in foreign languages as swearing. Although, in this case, it should definitely count as swearing. Because it really has been a BLOODY.LONG.DAY!!!)

But there was ONE (only one) absolutely, positively, fabulous thing that happened today.

But before I tell you what it was, I need to preface with a little history:
(I don't actually need to, but evidently I'm in an over-sharing mood because today I drank Mountain Dew. The pink kind. Yes, it was extremely disgusting.)

ANYWAY, I don't know about you, but I was not raised in or around "the military". My dad was never drafted into Vietnam, my grandpa never told war stories, (at least not to me) and as far as I knew growing up, "war" and "soldier" were terms associated with other people far removed from me. (I was in High School when I heard my Uncle's Vietnam story. Before that, I don't think I even knew he had been there.)

Fast forward to my early 20's. While living in Carlsbad, I had a few dates with Marines and even went on-base at Camp Pendelton once. (Eric, I still think you're a crazy stalker, I'm afraid of you, and I hope you never find me!) I remember thinking the Base was sorta creepy, but didn't think anymore about it.

So because I never dated a military boy seriously, I never considered being a military wife. Not ever in my entire life not even for a second!

When I married Doug, I thought I was marrying someone who wanted to be a Dentist. (A GENERAL Dentist to boot! None of this "2-year-pediatric-residency" nonsense!)
When Doug started considering the military as a means for paying for Dental school, I was totally opposed at first. It took me awhile (a long while) to warm up to the idea. (I'm still warming.) And frankly, I still think Military bases are a little creepy! (Which is unfortunate considering I'm about to move on to one.)

What I'm trying to say is...
There is nothing in my realm of experience, past or present, that could ever have prepared me for this: 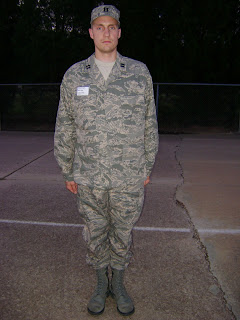 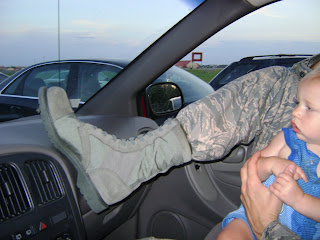 And yet, here we all are.

(Hey, remember that 80's song "Camouflage" by Stan Ridgway? Yep. It's rad. I guess I do have some experience with Camouflage. It seems that 'Things are never quite the way they seem'.)

So anyway, it's like I said before. It's been a bloody long day. But seeing Doug, even in camouflage, made it all worth it.

The Mountain Dew has now officially warn off...

Email ThisBlogThis!Share to TwitterShare to FacebookShare to Pinterest
Labels: I'd rather have hot pokers shoved under my finger nails, Travelling with boys

First off, when has saying English swear words, become classified as a 'foriegn' language?

Second, I love the shoes!!!! I actually own a pair and I wear them when I catch aquatic insects. (They don't let any stream water get inside onto my socks!)

Third, Is Doug happy? How is he liking it?

I totally understand what you mean. I hope all is well, though! Yea to seeing Doug!!!

I feel like crying for you. (Of course I'm pregnant and feel like cryig all the time....) But I bet seeing Doug in that uniform makes it all real. Good luck!!!!

Oh, and welcome to the south! I hope everyone is showing you a little southern hospitality.

AND, I used your snickerdoodle recipe the other day. SO YUMMY!

Ha! It just makes me want to order him to do silly things like make a bed with hospital corners. (Do they teach that in dental school?)

Best of o' luck to all of you!

Man that is some good posture. Now drop and give me 50! Oh yeah, pink Mountain Dew? What?

psst, just to let you know, your last name is showing on Doug's id tag on the picture with Gabe.thats sposed to be a secret,isn't it?

Em! I will fix the picture (blur your name and fix gabe's red eye) and send it right back to you to upload!

It is in your email

glad to be of assistance

Can't wait to hear you swearing in Japanese.

did you say RAD?