As I sit here at the computer the slightly uncomfortable tingling on the back of my sunburned thighs reminds me of our trip to the beach a few days ago. The day I came face to face with death and laughed in his ugly face.


Allow me to set the stage:
It was another idyllic day in Destin. The water was warm, the sand white, and the waters of the emerald coast were, well...emerald! 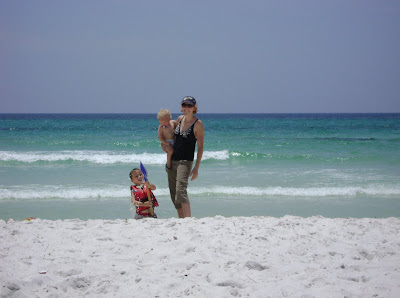 The Chefs* and the Dubs** had bravely ventured to the beach despite adults being outnumbered by children 2 to 1.

The children were frolicking happily in the sand and Gabe and I were in knee-deep water cooling off and gazing out at the horizon. 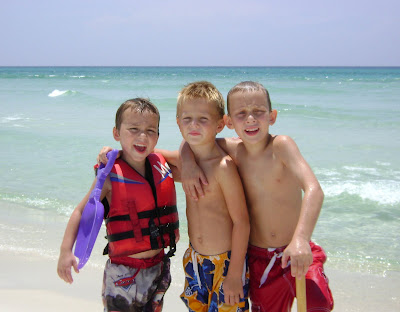 I must have felt the stares, because something (finally) caused me to turn towards shore. Which is when I saw a large crowd gathered on the beach staring at me! "They must have heard of my blog!" I thought to myself. "Either that, or I look hotter than usual in this tankini!" (Actually, I thought: "Crap! There must have been dolphins out there and I missed them AGAIN!")

Then I realized a few things simultaneously. There were only five people left in the water, Gabe and I, two other swimmers, and a life guard. And the life guard was pointing and saying something... 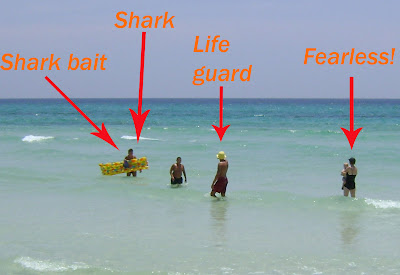 Turns out, a shark was swimming close to shore and the life guard was getting everyone out of the water. Except Gabe and I who were/are, evidently, fearless. (read: clueless)

Unfortunately, although everyone else saw the shark, I didn't.

Fortunately, I have proof of my bravery! Joe was on the shore alternately yelling at me to "GET OUT" and snapping pictures. Which is why I have pictorial evidence of my brush with Jaws!(read: cluelessness).

Unfortunately, no matter how big I blow up the picture, it still just looks like a tiny black shadow. 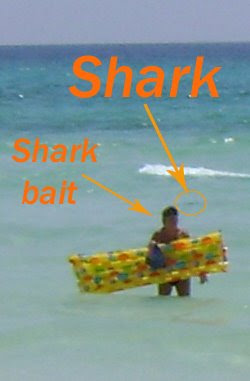 But nonetheless, the fact remains that I battled nature and WON!

Except that nature fried the crap out of my formerly pasty white legs.

So lets just call it a draw.


*This is a clever play on their real last name, and you'd be laughing at my cleverness if you knew what that was.

**This stands for "W" which is the first letter of Wilberforce which is my last name.

And Shark Week is coming right up on Discovery.

That is quite scary. Glad you made it out alive.

It has drama, intrigue, a heroine (that would be the shark for eradicating the world of ugly blow up yellow floating nonsense)

You are fearless. And a great writer. You know, that same thing happened to me a few years back... totally cool!!!

Glad you didn't get bitten!=D

Emily, I suspect that your lucky that your kids have lasted longer than the snakes I left in your care. Feeding them to sharks? Nice touch.

Doug, I am terribly disappointed in your photojournalism (or lack thereof). Looks like a floating log or garbage bag. I'm not buying the shark thing until I see irrefutable proof.

We JUST brought Doug home from COT today...so he wasn't even there. As for your slanderous comment, Joe has no comment.

Dear Mrs. Wilberforce, you should get out of the water.

so so glad you didn't get eaten. i can totally tell that black spot is a shark.

Doug, your wife is freakin' hilarious! Love it!