Doug and I just finished watching AUGUST RUSH and I'm just gonna be honest here;
I LOVED IT!!!

I just don't even know what else to say. I just loved it, alright?! Sure. All you professional film critics out there are going to shoot me down, but I don't even care.

Furthermore, I now have a crush on Jonathan Rhys Meyers who has an extremely sweet Irish accent and an awesome singing voice! (I looked it up and it really was him singing...not a voice-over.) 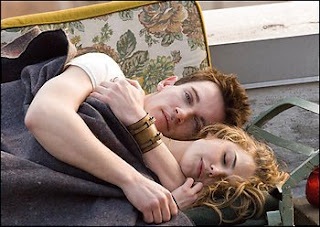 Anyway, part-way through the movie, Doug looked over at me and said; "You wish you'd married someone with musical talent! DON'T YOU!?!?" In a very accusatory manner. I didn't like his tone at all. And my answer is irrelevant.

The fact is...
wait...what were we talking about?

So anyway, let's just say I do have a great appreciation for musical talent. I started violin lessons at the tender age of three and took private lessons for 10 years. "Wow! You must be really good if you took lessons for that long!" you say. "Well, no." I say. "You'd be quite wrong about that." Much like my less-than-stellar college career, so was my violin career. The word "mediocre" comes to mind. Oh, and my mom saying (very truthfully) "Are you content with being mediocre? Because that's the kind of player you'll be if you don't practice." And I was, and I was.

My point here is (I think) that although I'm not doing any performing these days, (thank goodness!) I still love classical music and have a great appreciation for it. Especially stringed instruments. (Featured heavily in this film.) Also, I like rock music. And pretty music. And music played in Central Park by Grifters music.

So yeah. I liked the movie.

It was clean, fanciful, musical, it had an engaging plot, and it had a happy ending. Can't ask for much more than that. (Well, many of you can, but I don't bother to.)

PLUS, (as an aside) I happen to even know a real live musical prodigy. He (who will remain nameless for Doug's sake) sat down at the piano at the age of 13 and taught himself to play. Although he can't read music, he can play the piano beautifully, by ear, with improvisation, any Depeche Mode song you can name. (And I can name quite a few.) And lots from Toad the Wet Sprocket, too. And any other song he's ever heard. And that is just cool. It doesn't even matter if you like those bands! (Dave!) It's still cool!!!

So alright. Do I wish Doug could do that? Maybe a tiny bit. But I wish I could do it too and I wish my kids could do it and everyone else in the world could too, AND I wish we all had Grand Piano's to play on. So it's not like I'm unfair or anything. I just like music. And Irish accents.

And I liked August Rush.
And that's all I'm going to say about that!

Hahaha, okay, I'll admit it... I liked it too. But HELLO, don't you ALREADY love Jonathan Rys Meyers from "Bend It Like Beckham"??? That's like my favorite movie ever! Or one of them anyway. =) If you have not seen that movie, run out and get it RIGHT AWAY.

I liked the movie also.
I thought I'd stop by and say hi after reading the post on Hollywood's blog.

I was able to watch this movie on account of JRM being so lovely and all but I gotta tell you I just couldn't buy all the twisty turny connections that made the fairy tale ending possible. I have to recommend another musical protege movie to you called Vitus (2007). I thought that one was SO SO good. I hope you'll let me know what you think if you see it.

Eww. Dougy >>> icky ex with musical talent! That one was scary and eccentric and dramatic. Eww.

Also, I STINK at piano and I've been learning for years. I never EVER practice. We can be pretend to be cool at music buddies!

Who could resist musical talent and an Irish accent??!!

Hey! I have seen Bend It Like Beckham! But it was a loooong time ago. I thought he looked familiar!!!

It ain't just the accent, sister. I think it's the sneer.

You are justified! As a media arts major I personally feel that August Rush was the best movie in 2007. I keep telling people this and the look at me like I'm insane, but the simple fact is that the film had a great story that was moving and inspirational.

have you seen ps i love you? it has irish guys in the show too. i love august rush as well.