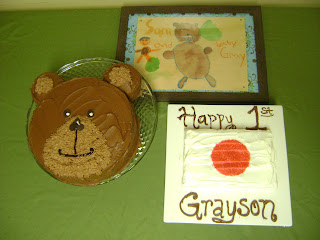 He had his first birthday yesterday and he's toddling all over the place (with occasional pauses to sit down and regain his balance.)  We had his party last night and like most one-year-olds, he seemed very confused by it. 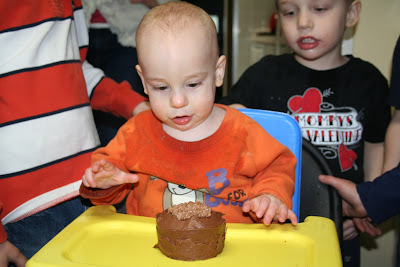 Gabey:  Still loves to say "Peacock", call people "Peacock Head" and wants a peacock cake for his fourth birthday (coming right up).  After Max's recent piano recital, we went to the mall food court for lunch and ate at "Peacock" just for him. 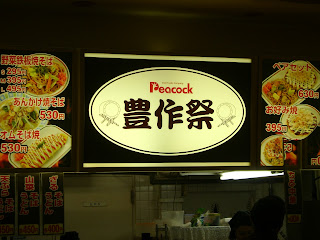 He misses his girlfriend/wife (there was a ceremony) Madeleine a lot.
He's stopped asking about preschool (they don't have the staff to restart it)
He plays with his buddy Isaac every day.
Sammy:  If we are Facebook friends, maybe you've noticed Sammy's new haircut.
No?  Here's the story:  Sammy has been wanting a Mohawk for awhile now.  A long while.  Doug's response?  "Over my dead body."

But then I was reading "Kids Are Worth It" by Barbara Colorosa and it said:


"[I]f you let your children make most of their own decisions (decisions that are not life-threatening, morally threatening, or unhealthy) before they reach puberty, they rarely take the quantum leap into serious rebellion in the teen years, because it's hard to rebel against one's own decision."

She then describes letting her 11-year-old son have the barber shave one side of his head and put two stripes in it. 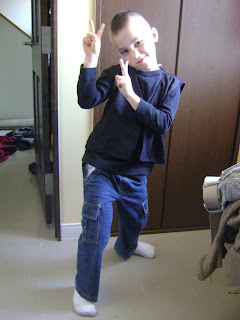 So I took Sam to get his haircut and told him he could get whatever he wanted.  He was THRILLED.  Of course he requested a mohawk and was jumping for joy when he came home. It gave him quite the shot of attitude.  (Clearly!  As you see by these pictures taken right after arriving home.) 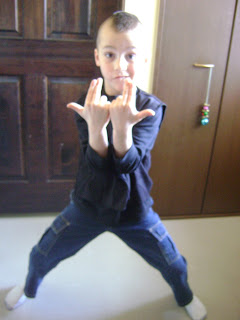 For example, notice the pants.  He put on jeans voluntarily.  After TWO YEARS of boycotting jeans because they aren't "cosy"-- he put them on.  He told me today (he's wearing them again) that "Well...I think that...they look 'cool'."
Do you know how many pairs of knit pants and sweats I've purchased for this little punk?  A LOT!!! 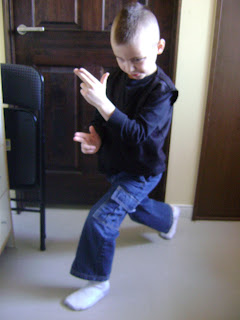 Also, he got out the black (pirate) vest from the dress up bag.  Evidently that looks "cool" too.
(He wanted to wear this outfit to church.  NEGATIVE!)

Maxwell:  Max had his first real-life piano recital on Saturday.  It was a BIG DEAL!  We had to drive to Hachinohe and he got to perform on a Bechstein grand piano.
He played a pretty hard song (above his current skill level) called "Italian Jazz" and he did a great job.  When he made a mistake, he stayed calm and kept going.
We are very proud of him even though he claims that practicing is the worst torture ever. 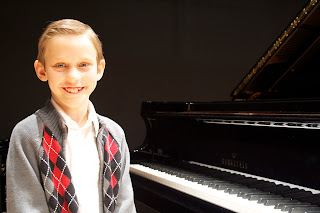 (And now you're wondering why I don't let him make the decision to quit?! Well, because the example in the book was about hairstyles not music lessons, so just back off, will ya?!?!)

Email ThisBlogThis!Share to TwitterShare to FacebookShare to Pinterest
Labels: Living with boys

Love the updates! Sammy is awesome :) They are all getting so big, Max looks great at his recital!

Happy Birthday baby Gray! Love the hair and that is so true. I've read the Love and Logic book and it talks about that as well...I think it works! :) And well done Max on his recital, he looked so handsome! Love you Emmy!!

I can't believe Grayson is 1!!! Happy birthday to that little man! What a cutie!!

Max. What an angel! SO handsome!

I do agree with the concept of letting children make choices when they are young and nonconsequencial(I'm not sure if that is a word). I think hair is a good place to let them choose... some of my boys wore their hair perhaps too long...but learning to choose is needed it isn't just a given that people can make good choices just because they should and a mohawk looks so much better on a 4/5 year old then it does on my next door neighbor who has a grandchild. Keep up the good work and ...we are again and still praying for your safety and wish wish wish the shaking would STOP!!!@

I love Sams haircut. You truly have an 80's child. I am thinking of you this very minute....I am listening to Big Country. It reminds me of when I flew to CA to visit you (15 years ago) and you and Leslie picked me up from the airport and we listened to Big Country all the way to Carlsbad. Good memories :) P.S. I think you should add mullet to your families hairstyles to have a broad range of the 80's present. You have the punk rocker now you need the butt rocker. HA. I love you!

Happy birthday Gray-Gray! Hey, I can't say anything about Sam's hair - you were there when I shaved Kody's hair just for Halloween! I think the mohawk looks fun anyway. Way to go on the piano playing Max, you'll drive the girls wild one day.