Today we have a guest post written by my husband Doug.  He hasn't been "Feeling Bloggy" lately and hasn't kept up his blog.  So I asked him to post it here.

Yes Cololnel Rothstein, I have FINALLY done it!

Our base commander has instituted the slogan "Have you done it?" He goes around asking people this. Now it is generally known what he is referring to, but for the first day people had to figure out what "it" was. "IT" is going on the Red Cross volunteer trips.  (Check out "Misawa Helps" on Facebook.)  My friend Tyler has taken over the head role from my other friend Wes who moved on Tuesday.

Anyway, I showed up early Thursday morning and boarded a bus with some friends. Luckily I was in the bus with the Air Force workers and not the Marines who are up from Okinawa helping out. They are a different breed for sure!
We loaded up and headed south about 2 hours to Noda. This is a little town of about 4700 residents. It sits in a cove on the coast and the tsunami, I'm told, was amplified as the wave entered the cove and wiped out 500 of the 1200 houses.  Fortunately "only" 37 were reported dead.  Evidently the emergency sirens worked. The displaced victims, I'm told, are living at the high school or with family. It was reported from multiple sources, though I can hardly imagine it, that the tsunami wave was 20 meters! (1 meter=3.2 feet) 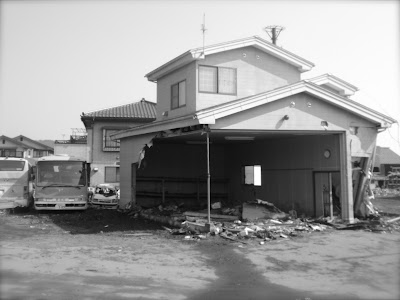 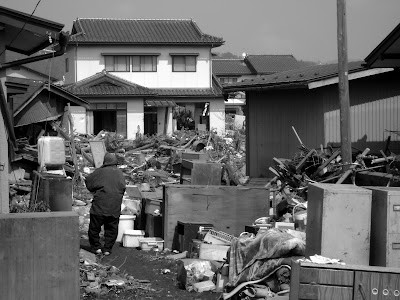 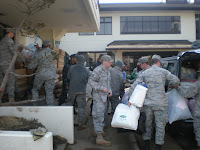 As we entered the town center I began to see signs of damage; broken windows, flooded shops, and a lot of debris. Then we pulled into the center plaza: looking west was a large plane of leveled houses. It was just unbelievable. 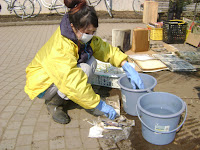 Once there Capt H met with the town's mayor who gave us our assigned clean up area for the day. We then unloaded a van of food and blankets and diapers for the locals. Nearby I saw where they were keeping all the personal effects like photos. A lady was crouched down rinsing silt and sand off the pictures and hanging them to dry. There were some really cute pictures there too.

Once at our site we all immediately set to work. Imagine a newly zoned construction area...in the city dump. This is how is seemed, and our job was to clear it while trying to find things that where not broken and setting them aside: statues, bowls, plates, bottles of booze...someone found a title to a property undamaged in a card board tube (how does a cardboard tube survive a giant tsunami!?), pots, toys, tools, etc. Everyone was eager to work. All the rubble was hauled to the "curb" and piled there. 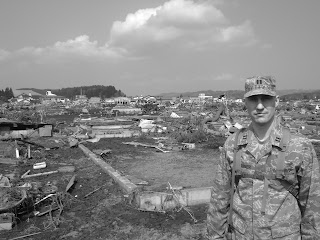 I decided to start where I was standing. I found a lot of roof tiles so I started a pile of the unbroken ones. As I worked I began to see people take to different techniques. Some would focus on finding unbroken items. One man seemed intent on finding the largest things to conquer. He'd spend ten minutes beating bricks off a fallen wall so he could haul it away. Another was making a large stack at the curb with cinder blocks and then moved onto making a collection with the landscaping stones (this house seemed to have had beautiful landscaping). I moved over closer to where my friends were working and got caught up in some rubble there and soon noticed I was drifting around not really sure where to work or what to do. Running through my mind was advice I think I heard from Em, "just focus on where you are".

It was true, you just had to focus on the spot you are working on. I found a stretch along side one foundation and focused there. I soon saw some progress and found some nice photographs, a framed collage of a family pictures, some clothing, (though they likely wont want it) some more roof tiles, bowls etc. 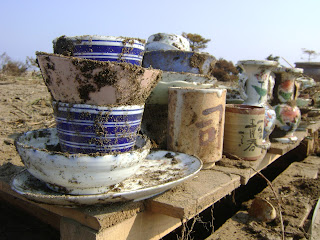 I spent about an hour in one spot near another foundation uncovering a lot of kitchen ware, then moved over to the next house helping two other men heft giant logs out/off of its floor. Our crews made a lot of progress, yet when you stand up and look over the whole area, the magnitude is sobering. As were carrying a plastered covered wall to the pile, Merrill mentioned the quote from Elder Uchtdorf "Lift where you stand." True, it is overwhelming as many things can be in life, but you just have to start where you are and lift where you stand.

Though we did a lot of work, recovered some personal effects, I think the biggest gain from this "operation" was what the name implies: Tomadachi-Friend. We were seen by the people of Noda as friends coming to help out. That is the mission, to show them we care and build a true friendship between the U.S. and Japan. Then if I look at the few lots that we cleared out I'm sure it made a big difference to those people. I think I would be grateful for the few photos recovered if I lost all of my photos of our family. 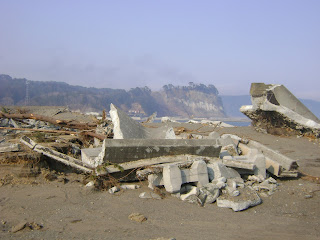 (the remnants of the tsunami sea wall)
I am so grateful to have been a part of that day's efforts. I am also thankful to have had the opportunity to live through/during these disasters. It will forever be a part of me and my family. I had the boys get out of the car and stand in front of a giant ship in Hachinohe so they could later see they were a part of these events. Often this verse has gone through my mind since Em read it to us the other night: "Thou knowest the greatness of God; and he shall consecrate thine afflictions for thy gain. Wherefore, thy soul shall be blessed." (2 Nephi 2:2-3)


To top off a great day of tsunami damage clean-up we had a large quake while we were loading up the bus to leave!!!!! 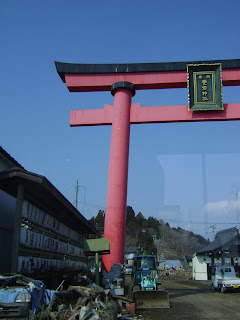 Here is a better written article on Noda.

*Other titles for this post: Where do I start? Is this helping? Do I pick up those little things? Do I bother with that giant beam? Did this really happen? Will this ever be done? What do I grab before fleeing? How'd that house get there? Why is that house demolished and the others around it fine? Wow!

Good job Doug. Love the quote, "Lift where you stand". I'm standing here in the states, and can lift my wallet out of my pocket to help, and lift a package to the Post Office of items for "Operation Back Pack". Thanks to you and Emily for sharing, inspiring and setting the example. God bless all of you and the people of Japan. DSC

H. David Burton (Yikes..now I'm afraid I got his name wrong) any way take about the welfare plan just a few minutes ago...and I thought of you and Em and those friends of yours and what and example you are to all of us. I also thought of you during Pres Uchtdorf when he state to spread the gospel and if you have to open your mouth....maybe not the exact quote but I think with all your service and this wonderful blog you are in fact spreading the gospel... so proud to know you and hope things get better for every one there soon. Our prayers are with you daily.
Claudia

Wow. For some reason (probably it's my "baby" brother in the camo) that post really hit me hard. We have seen so many pictures that the destruction and devastation is so horrific and almost unreal. To hear both Emmy and Doug actually describe digging through the rubble to help...it brings tears. I'm so glad you are there to help our friends in Japan. Our Japanese "brothers and sisters" who have lost everything. Glad my brother and sister are there to help and reach out in true charity.

Great post Douglas and I LOVE the pictures!! How come you never post on YOUR blog anymore?!? Miss you guys!