Thursday was going to be "the" big water day for us.  Buuut...
I sent Doug to Scuba Dive on his own.
After looking at about 20 different packages and possibilities, it was clear that I could go with Doug, snorkel in between his dives, watch Bubby, and have fun.
But, it would have been super busy.  And tiring.  And probably not extremely baby friendly.
And the dives wouldn't have been as great for Sugar Lips.
And I like to snorkel, but I'd already gone when we went to Green Island.

SO, I convinced Doug that I would be absolutely fabulously fine staying "home", sleeping in, and going for a leisurely breakfast.  And that's what Gray and I did.  While Doug fulfilled his life long dream to scuba dive the Great Barrier Reef, Gray and I went back to Perrotta's and this time I got the Ricotta pancakes. 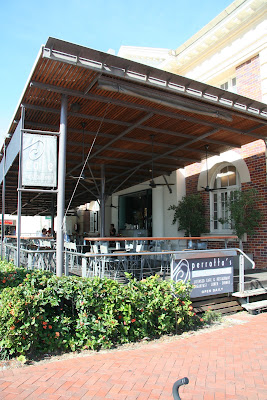 We walked slowly and deliberately through some souvenir shops checking out every single item, (not Doug's fave thing to do...) and then walked down to the free City "Pool". 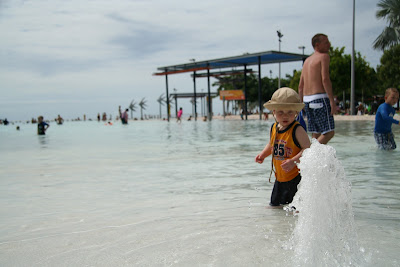 This set-up is really neat.  Right by the water, in the middle of the town "Esplanade", they've built this open air, salt water "pool".  More like a giant fountain or water feature that the public is encouraged to play in. 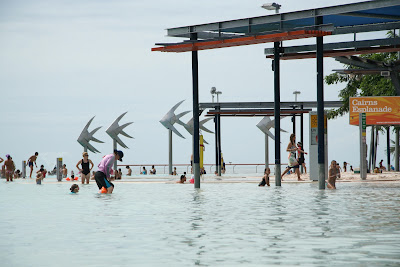 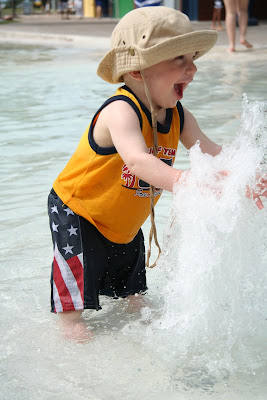 It's got a (very) shallow end and gets to about 5 feet at its deepest.  (If our metric conversion is correct.)  It has a sandy little "beach" on one side, shady areas, and a bench all the way around.  Baby Gray loved it.

Once he got used to it. 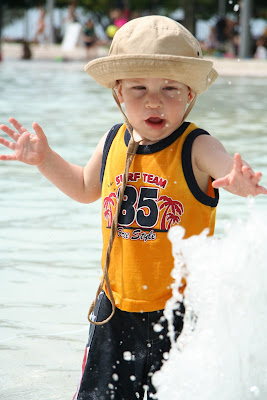 We had a nice relaxing day together while Doug was out swimming it up.
That night when Doug was back, we went to the very yummy "Raw Prawn" for dinner, and finished the evening by watching two episodes of "Survivor".
Two thumbs up!
Favorite parts of the day:
*Chatting up the nice Australian lady next to us at the Raw Prawn.  She said she'd lived in Texas for awhile and it was great to hear our accents again!
*At the water park, two little girls were sitting next to me playing "siza's, paypah, roke".  (Rock, paper, scissors)  Loved listening to them.  They were adorable.
*While Gray took his afternoon nap, I watched the Australian version of HGTV.  Undercover Boss made me cry.  There was a commercial for  Relocation: Phil (Feel) Down (Den) Under (Unduh) and I really wanted to see it!  Actually, I wanted to watch ALL the shows they advertised!

Fabulous day! Saw a show do lemon ricotta pancakes the other day and thought of you! Yum. SO glad you are able to relax and chalk up some more great memories! love you and sugar lips and gray-gray