Sunday in New York (When I meet Larry King)

As it is getting late and we wont be going out again tonight, I think it's safe to say that today has passed without mishap. Not only that, it's been a really great day. 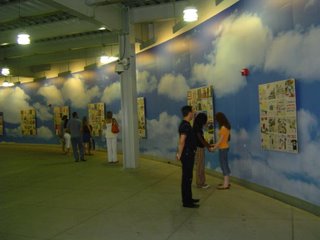 Today we attended church at the Manhattan Temple which in and of itself is really cool. There is a separate part of the building with a chapel and class rooms for regular church meetings (separate from the temple itself) where the Manhattan wards meet. As we came in and sat down, I turned around to get a look at the ward. Towards the back I saw a very familiar looking woman. Familiar because I just saw her on Dr. Phil a few weeks ago. It looked like Shawn King, the (Mormon) wife of Larry King with her two little boys. I was pondering if it really was her when I got a glimpse of who was sitting next to her. There was Larry King sitting with his family. It was a really great me 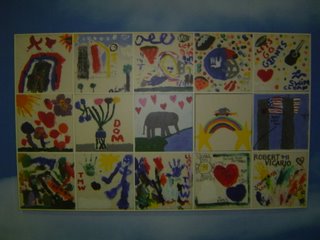 eting with lots of visitors sharing their testimonies. Afterwards, I saw Mr. King in the foyer and shook his hand and told him I really liked his interviews with President Hinkley. He then got on the elevator with us and Dug got to chat with him a little. It was very cool.
This evening we wanted to do something a little mellow, so after we all took naps, we went down to Ground Zero. There isn't a lot to see...it just looks like a huge construction sight. But on the fences surrounding the area, there are signs and pictures describing everything that happened on September 11. There are also signs with the names of all the hero's and a display of pictures painted by some of their kids. Pretty powerful stuff!

i am so glad you are having fun! it's funny to think that was us one year ago! looking forward to seeing you when you come back to ri.