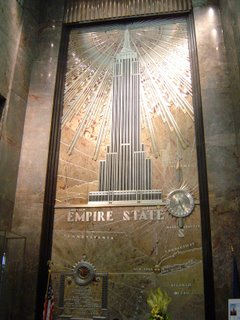 Does anyone know why New York is the Empire State? I don't, but I probably have it in a brochure somewhere.

This evening we decided to explore "The Village". Doesn't that just reek of hip yuppiness? While wandering aimlessly, we spotted the Empire State Building and headed towards it. Although it was getting late, we decided to go up and check it out--cost, wait time, etc. We figured we may as well do it since we were already there and may not have time tomorrow so we bought tickets and headed for the line. The wait (for the elevator to the observation deck) was supposed to be an hour to an hour and a half and we were starting to reconsider the whole idea.

D went and asked an employee if she thought it would be just as busy tomorrow and she told him just to wait for a minute. After directing a big group of people to the incredibly long line, she moved a barricade, and ushered us to an elevator. Without us asking, she let us skip the WHOLE LINE!!! We were stunned! Before getting on the elevator, D ran back and thanked her again. We couldn't believe how nice she was! 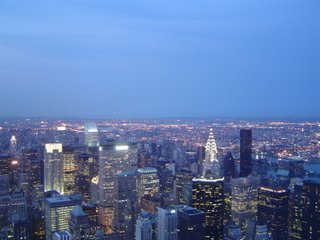 So we got to the top and looked around and it was awesome. It got dark while we were up there and the city just looked beautiful.

Unfortunately, in my old age I'm starting to get a little bit afraid of heights. Only if I think there's a possibility someone might fall from them, and it just so happens there were spaces in the wire fencing big enough for a kid to climb through (and plummet from).

So although I did enjoy the view, at the same time I was getting more and more sick to my stomach and less and less inclined to let my children anywhere near the edge. (Max is a really excellent climber! Okay, I'm getting sick thinking about it again.) 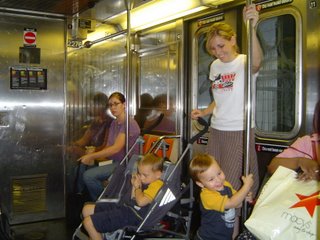 Anyway, despite my paranoia, it was a cool experience made even cooler by the "To Be Commended and Forever Praised" female employee who got my boys home and in bed that much sooner.

Tomorrow we're going to see the Statue of Liberty! Hooray for the Empire State!

Hey, I'm right there with ya on the heights thing -- when I visited the Empire State Bldg I hugged the wall so tight I think it fell in love! On a sillier note, I noticed the oh-so-cute twinner outfits on your boys and is that a double stroller? You really have become city folk!

Emily said...
This comment has been removed by a blog administrator.
7:17 PM

Where's the rest of your blog, Mama Bear? Sorry I had to delete your comment Em, no last names allowed.