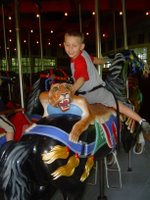 Yesterday, Monday, Dr. D had to go back to"work" (orientation) so the boys and I were on our own for the first time. We walked to Central Park and found the carousel. One hour down, lots more to go until Dad gets back. I didn't really have a second item on the agenda so after we all took a fun ride we started wandering aimlessly. Luckily, we ran into a really cool water play area. I stripp 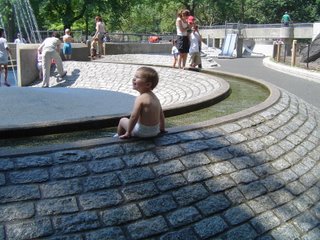 ed the boys to their undies (diaper and adorable boxer/briefs, respectively) and they took off. It was a really fun morning culminating in hotdogs from a nearby stand, then back to the apartment for naps. We ended the day by meeting for dinner at Gray's Papaya...a famous (rightfully so) hot dog stand. 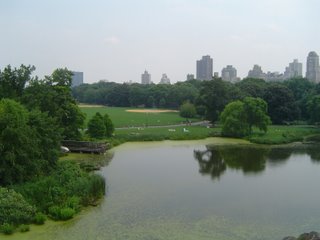 Today being the 4th, I whipped out the matching Moldy Gravy t-shirts (picked them up at the outlet for $2.50/ea.) and the whole fam. headed for The Park. (D had the day off.)

We discovered another new area with a giant turtle pond and a really cool castle, complete with turrets (where you can gaze down on the turtles). After that, we split up. The boys went one way, and I went to the Gu 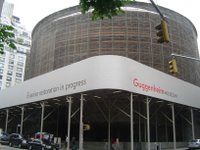 ggenheim. Yep, it's been awhile since I've wandered a big city alone, but it's still just as fun. I went through the whole gallery at a leisurely pace with nary a whiny boy in sight. I even got to sit down and sketch one of the few Renoir's I encountered. The exhibits were mostly Modern Art, which I really don't get, but there was still tons of cool stuff to see. The inside of the building is awesome, but unfortunately, I didn't get to see the out 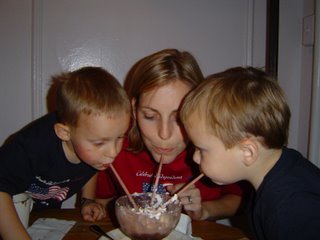 side because it's covered in scaffolding as it's being renovated. (Bummer!!!) When I finished at the museum, I got to do a little shopping on 5th Avenue and checked out H&M (Thanks Felix!) The boys met up with me again for dinner followed by dessert at Serendipity. (YES! I got to go into a restaurant JOHN CUSACK has been in when he, not coincidently, made the movie "Serendipity") From there, we made our way to where the co-residents were and we all watched fire works over the Roosevelt Bridge. All in all, it's been a pretty great two days with no costly parking fines! Hopefully the rest of the week goes as well!

Yay for John Cusack! I swear, your kids look like they've already grown since leaving.

it's just their bad haircuts that are throwing you off. They're actually shrinking.