--or--
"The Post Where I Try to Sound Like a Novelist"
Our first expedition had been carefully planned and extensively researched over the last few weeks by Doug. We would take the Sky Train, and then a taxi, to the .
Yes, a doll museum.
A museum housing numerous dolls. This was our one “must do” this trip and we would let nothing deter us.
Why a doll museum you ask? Because Doug LOVES collectible dolls! No. Actually, because in a non-Christian country, this was the only lead Doug could find on a Thai Nativity set. The one thing I told him he MUST find and bring home. After talking to all the interpreters on the trip with no luck, and even tracking down a Catholic church with poor results, this was our last hope. He had found a website for “Bangkok Dolls” on-line and seen a nativity on the site. But the site had neither directions, nor information about whether or not such a thing was even for sale.
We started our trek and after many detours, a trip through the ghetto, and numerous stops for help, we finally found it tucked back in a cul-de-sac in a crumbling neighborhood: Bangkok Dolls(.com) & . 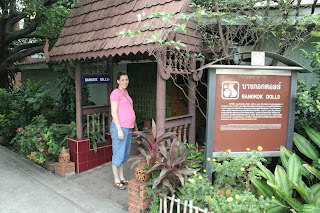 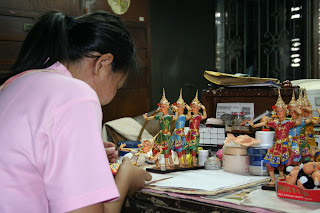 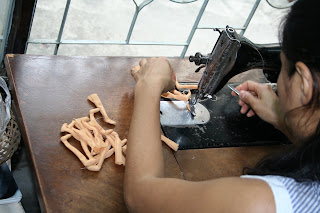 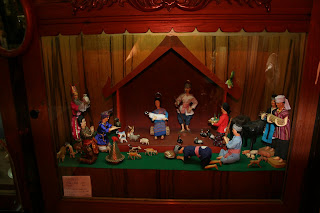 TRIUMPH!!!
But would they really have one for us? Would it have to be specially made to order? Would they just sell us the display so we could get our hot little hands on it NOW?
A woman was summoned. Doug motioned to the Nativity and communicated that he wanted to buy it. She seemed to understand and made a phone call including some random hand gestures we weren't sure how to interpret. We hoped someone was coming to assist us.
Finally, the owner of the museum showed up. The son of Mrs. Tongkorn Chandavimol, original owner and doll designer, she made her first doll in 1953. Mr. Chandavimol spoke good English and sent someone to fetch the nativity for us. An assistant brought out the different dolls. A wooden building, Mary holding Jesus, Joseph, three wise men, and three farmers. All distinctively Thai in dress and appearance. (I could have cried with happiness.)
SUCCESS!!!
After 45 minutes or so, we left with our prize and a determination to help this man who was trying to keep his mother’s cottage industry alive. (Know anyone who wants a Thai Nativity? All the info is at the end of this post!!!)
Our taxi driver, whom we’d told to wait just 5 or 10 minutes, begrudgingly took us back to the Sky Train station and forgave us only when he saw Doug had doubled the promised fare.
(end novella)
The rest of the day? 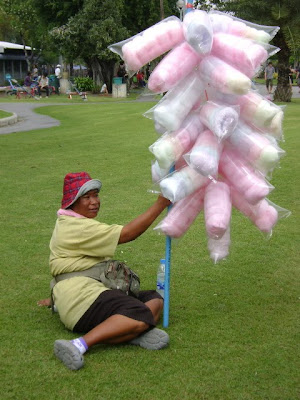 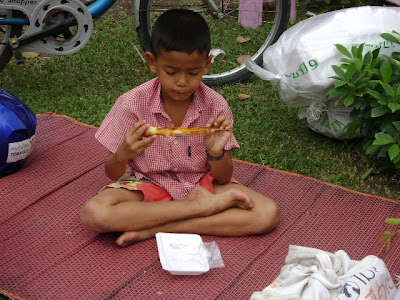 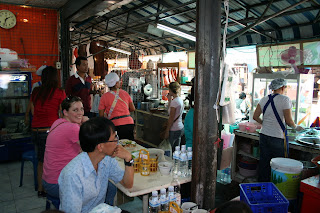 We went to a HUGE weekend market to shop and my feet once again burst out of my shoes so badly that Doug bought me some $3 fake crocs. (Which my feet are currently stuffed into.) Souvenirs were haggled over (by Doug, not ) and purchased. We left satisfied with our treasures, but hot and swollen, and went back to the hotel for a swim and some Skype calls to the boys.
(This little boy just played the same two notes over and over. It wasn't pretty. But you had to give him props--and Bat--for effort.) 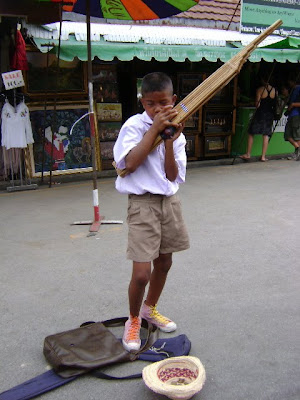 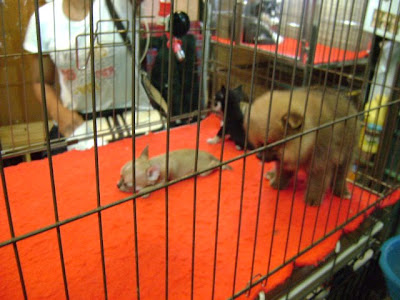 I would end this lengthy narrative right here, but I can’t leave out dinner. Even after laying by the pool with my feet up, I was still incredibly swollen and had no desire to venture back into the heat in search of a cheap place to eat. So instead, we did something we’ve never done before in 9 years of marriage. We ate at our hotel. In the “Thai” restaurant. And it was fabulous.
(I got Chicken Satay with Peanut Sauce and Doug got some sort of fish.) 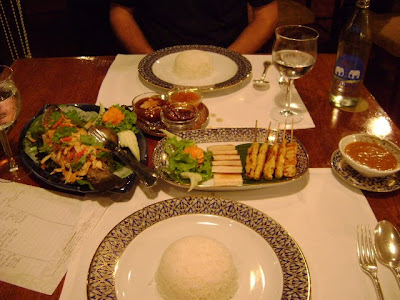 We had the place to ourselves, had awesome food, and were actually able to discuss and plan our future a little bit. (I made a list. I can’t discuss important topics like where we’re going to live in the future without making a list) We actually had a lengthy, uninterrupted adult discussion! Such a novelty! 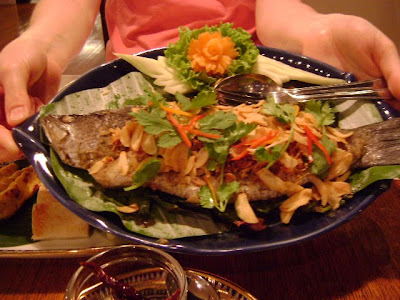 WOW! What a find. I cannot wait to see pictures of the cherished nativity. They sell nativities in Spain. This should be your next stop!!!!!

I would love a Thai nativity! How much?

Glad you guys are having such a great time. Hope your feet return to their normal size soon!

I am trying not to covet your nativity. I LOVE nativities and that one is really, really cool.

Awesome narrative in a Thai style-haha. I love all of your pictures.
And where did you decide to live after your adult discussion?:)

What an amazing experience to be able to travel Asia. Thailand looks beautiful.

so so jealous! looks like a fun trip and you're such a trooper being pregnant! coconut sticky rice and mango is my FAVORITE - YUMYUMYUM!!

My sister found your blog. We have been trying to contact the doll museum to buy a nativity for months now. Any information you have on contacting them to purchase one would be greatly appreciated! shonandlynette@peoplepc.com

Thanks very much for this 4 year-old post! We're visiting in Bangkok, and I googled "nativity set Bangkok. Your post came up, and with a bit more research I figured out where Bangkok Dolls is located. Our experience was just like yours. Our taxi driver tried to drop us off at another museum, and then had to ask directions three or four times when we insisted on going to Bangkok Dolls. The lights in the museum had to be turned on for us. The owner wasn't inclined to negotiate very much; I guess he knew that anyone who put in the effort to find the place must be motivated to buy.
We're going back to Canada with a treasured nativity set and a memorable experience!
Thanks for your help.
Harry