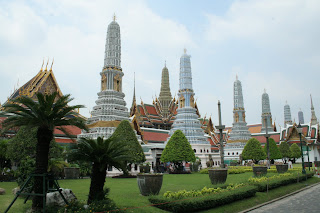 This Morning:
E: "HONEY! LOOK AT MY ANKLES"
D: "Um, those aren't ankles...*"
First things first: BREAKFAST! We're staying at the Imperial Queen's Park Hotel and I can highly recommend it...because not only is it quite nice, but they have an AWESOME BREAKFAST BUFFET. And, let's face it...few things in life make me happier than awesome breakfast buffets. So after discovering I had a serious case of the cankles and adjusting my Chaco's accordingly, we headed downstairs for French toast, eggs, fresh fruit and juice, muffins, and any number of noodle, rice and curry dishes.
When I asked the server (offering coffee or tea) if they had hot chocolate, she said "no" (as I expected) but then later brought a small steaming pitcher to my table and set it down putting her finger to her lips. It was completely unsweetened, but for some reason, was still oddly very good.
After breakfast, Doug got us a taxi and we went straight to the "Grand Palace" which is a very large complex housing lots of really really cool buildings. (You had to be wearing long pants or skirts to enter--and no sleeveless tops.) 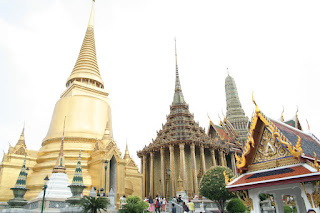 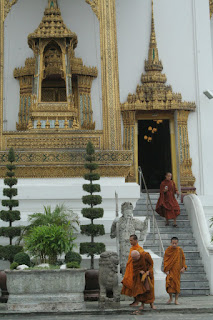 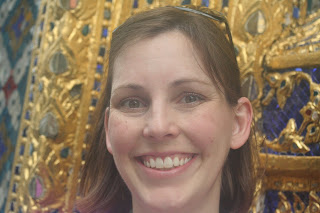 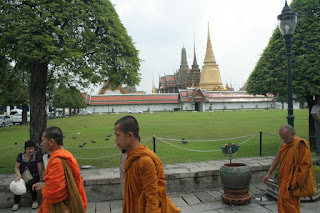 After walking around awhile, I started slowing down and waddling quite a bit. My toes were turning to sausages and trying to expand out of my sandals and it soon became apparent that my feet were about to explode.
So instead of walking the relatively short distance to our next destination, my considerate husband hired a Tuk Tuk 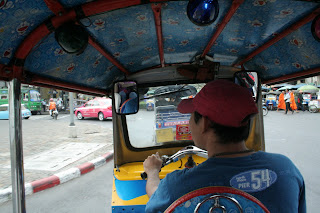 to take us to...
Wat Po: Home of the world's largest reclining Buddah. 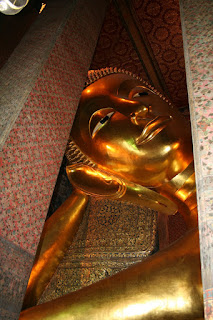 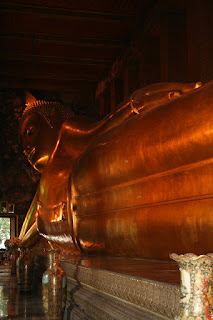 And hard to photograph! 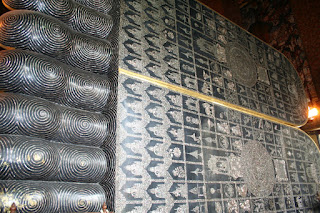 Once we were out of the temple, Doug forced my feet back into their torture chambers, and we knew any more sightseeing was out of the question. So it was on to lunch at a little place across the street.
Yum! Very Hemmingway-esqe. I got Shrimp Pad-Thai and Doug got Green Curry which was so good, but burned my mouth out.
We decided the best course of action would be to head back to the hotel and go for a swim. So we grabbed another taxi and headed back. Unfortunately, this time is wasn't quite as efficient and we sat in traffic for almost two hours. We both fell asleep.
--Hotel: Quick dip in the pool, re-dress, ready for next activity.--
D: "Do you want to talk in the car or read books?"
E: "What kind of question is that? Read, of course."
(Tactical error. We talked instead and had to carry our books all night.)
Now for the...
Dinner Cruise (with dancing) on the Chao Phraya River. We got on a bus from the hotel and sat in traffic for another hour. BUT, it was well worth it. The River Cruise was awesome!!! 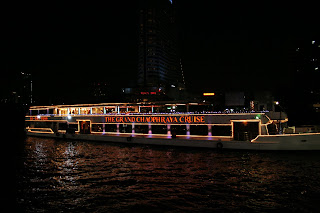 We were showered with orchids, and glowing jewelry, and attention from waiters and waitresses offering cool scented towels, drinks, and small gifts. There was a traditional Thai dance followed by live music and I was serenaded by the Saxaphonist. We saw a million beautiful sights and danced our way down the river and back. It was amazing. And a few times I had to stop and remind myself "I'm in Thailand! Dancing! On a river cruise! WOAH!" 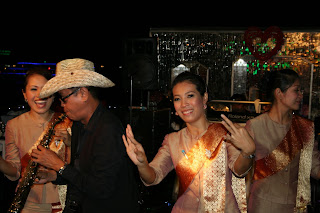 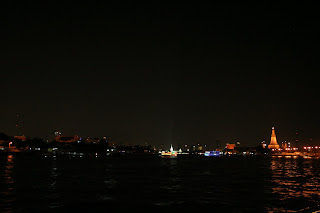 AWESOME DAY!!! More later...off for more adventure!
*What he didn't say: I have some serious cankles. (Ankles the same size as my calves) Evidently 7 months pregnant + Air travel + 100,000% humidity = EXTREME SWELLING OF APPENDAGES!

All I can say is WOW! Unbelievable day. How did you even find out about that cruise?? I am sure you guys had so much fun! I would love to see that Buddha. So different.
Enjoy the weather:)

I got the cankles in New York. Now I'm mildly swollen up all the time. Get some support hose for the flight home!