I (Doug) Need To Clear Up A Few Things Before I Begin:

(Get caught up here!)
* First off, I'm more like Andre Agassi than the earlier Billy Jean King era of tennis. I never wore short shorts, except on the 8th grade basketball team. And tennis is awesome--as is country music. However, I think the country music animosity is the only reason my brother approved/s of Em. (The ONLY reason? That's the ONLY reason he let me into the family? Thanks a LOT Dave!!!)
* I wanted to defend Em's honor at the film shoot because just the night before in General Conference President Hinckley had lectured the world on respecting womanhood. And I didn't equate Playboy models as being an honorable tribute to women. I'm over it though. You're forgiven Matt.
For me this story is all about Tuesday's. It was a Tuesday when I felt strongly that I needed to break up with my then girlfriend. (Yes it was sudden.  Yes I may have been a jerk, but I felt compelled to do it and do it RIGHT THEN!)
It was the following Tuesday when I decided to take a break after my O-Chem test and go climb at The Rock Garden.
(Did you get that people? We met a WEEK after he broke up with his girlfriend. Of course, he didn't tell me that so I was still feeling guilty I'd broken off an engagement so recently. HA!)
I can only recall one other time when I had even tried to get a girl's number, whom I didn't know. It was definitely not my style to hit-on girls in public. Yet I found myself sitting next to her on a bench watching others climb and talking to her, asking her where she was from, if she had been climbing long, etc.
As I was leaving the Rock Garden I decided to go ask her for her number. I went over to where she was getting her shoes on and struck up another conversation so I could tell her I was going climbing on Friday with some friends and ask would she like to come.
And I think the next Tuesday was a temple dedication that we attended together at the Marriott Center or something of the like.   (I'm pretty sure we did this separately but talked about it on the phone later.) (Yes, you may be right on that one, so that Tuesday must have been the one that there was a letter on my door from my ex-girlfriend...but that's another story.=))
After coming home from the Rock Garden the night I met Emily, I immediately went to find one of my climbing buddies. First, I found Jason who said he was otherwise engaged.  (Probably doing something lame with his girlfriend/fiancee.)   (You know he's totally kidding, right Christina?  Don't worry.  I tell him all the time that he's NOT FUNNY.)   So I got a hold of Mike, who I believe had sworn off all women after a BAD experience which involved buying a ring and losing possession of it and seeing it on the For Sale board in the WILK. (Now I would love to see that blog post Mike/Lindsey!)
He agreed to go climbing with me on Friday. (But probably not before making some sort of snide comment.) The next day I looked at my phone list and called Emily. Unfortunately, I called the wrong Emily. After recovering and chatting with the other Emily for a while I hung up and called my new Emily. Emily's account seems to follow pretty accurately.

The next big event begins the following week when I called her up on Tuesday to ask her to do something. When she answered she said, "I was calling to see if you wanted to go camping this weekend?"
I need to interject here and tell my side of this story so I don't sound like a total hussy. That week, Anna and Travis were planning an over-night climbing trip. Anna told me to come along and invite Bryant. I said, flippantly, "Neh...If I invited anyone it would be Doug..." The thing was, I had no intention of doing any such thing. I was raised in a household full of very strict rules concerning girl/boy relations. Most of the rules were categorically ignored by me.
Except the one that said "Girls don't call boys!"
I tended to follow that rule very strictly with boys I liked. (Male friends and actual boyfriends, no big whoop. Suitors, no.) Not only did I not CALL them, but I definitely didn't call them up and invite them on over-nighters after only knowing them for A WEEK!
But Anna decided that that was indeed what I should do. After approximately two hours of arguing, I conceded defeat to her superior debating skills and intellect, and sheepishly and nervously went to my room to call Doug for the first time. To not only ASK HIM OUT, but ASK HIM TO JOIN ME ON A CAMPING TRIP.  I was thrilled when I got the answering machine. I left a quick message and hung-up hoping I hadn't just branded a scarlet A onto my forehead.
I was thinking, "I thought I was the one who called. Hmmm."
Then I said yes. I was excited to have such a huge invitation so quickly. I asked my brother if he thought I should go and he gave his blessing.  I, however, distinctly remember not asking my mom for advice on the unchaperoned camping trip with a girl I had just met and she had not met. =) Later that day I checked the answering machine for messages and found one from her. I thought "Ohhhh, now she doesn't sound so crazy." That next weekend we went down to Maple Canyon (located South West of Fountain Green Utah) with her roommate Anna and Anna's boyfriend Travis and I think Anna's cousin or something. (Yes. Cousin Reggie.) It was a very NICE date. 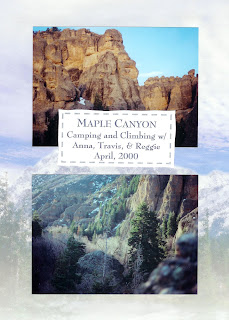 You can't beat new love, outdoors, campfire, darkness, a fire, and s'mores! We camped there overnight and went climbing the next morning. (Don't worry children reading this in the future: I didn't sleep in the tent with her. Reggie and I slept under the stars.) (Oh, and Tevas melt when they get too close to a fire, FYI!) 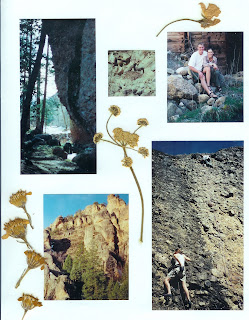 I remember she wore a white tank top and thinking she was so beautiful (Still is). She made a good tuna fish sandwich, which I had never before liked. She only dropped me about 8 feet while I was climbing. I remember thinking she was so awesome and fun to be with. We were always in good conversation together. Despite her Country shortfall, we had similar tastes in music. Right from the beginning it felt like we were great friends not awkward new dates. When we took that picture of us on the rocks on that trip I remember thinking it would have been a good spot to take an engagement picture. So even early on it must have already crossed my mind.
The last detail of this trip that I can find in my memory is when we were on the way to pick up the afore mentioned Reggie. She had some sort of note sticking out of her back pocket.  I found out she did not want me to see it. Naturally it became my only desire to see the note. It was a vicious struggle that unfortunately I lost after about an hour of driving and two or three venues. It turns out it was an e-mail she had printed out that day where she told her guy-friend Jayson that I was "the one".
So there is my account. I'll contract out one more post. It will be about the most controversial memory: the first time we held hands. Yes it is an innocent gesture, yet it symbolizes oh so much. Anyone can hug and most people can even kiss, but the first time you hold hands it tells the other person that you have much affection for them. And it is probably the only point upon which Emily is completely wrong (regarding our courtship that is. She has been completely wrong a couple/many times).
*Also, if anyone is faulting us for getting engaged/married so quickly you need to realize that if took all of our dates, hang out times, activities together, road trips, etc. and put them to once a week, then we dated about 1 year at least. That's how well we got to know each other. Yes, I too made fun of people like us who married quickly, yet we've been married over 8 years and still have never had a fight. Well, maybe I do lie just a little.
Well everyone, I hope you're happy.  You now have at least part of Doug's version.  And he's agreed to do at least one more installment.  In other news, I just found some old e-mail's, written to my family, about Doug, when we were dating.  So my job is getting easier by the minute.
Until next time...

Email ThisBlogThis!Share to TwitterShare to FacebookShare to Pinterest
Labels: Gratuitous History, How I Met Your Father

I love the story! I have to add one correction. I do not think that Travis slept in the tent (I can't picture me and Emily in the tent with Travis snuggled up in between). Besides we all know Travis if he has a chance to sleep out under the stars he will (FYI - living on my parents back porch with Adam for three months). Good JOB DOUG!!!!!! I think I deserve some kind of treat for being so instrumental in your meeting. I hope you are feeling better Em. Love ya :).

Great story! I love the tag team. I will ask Michael to post about the "ring", but I wouldn't hold my breath...=D

I love that I get a line in the story - even if it's not a flattering one!

I remember all of this happening! So fun to read your different versions.

Only one question - what exactly is a viscous struggle? Vicious, I would understand. Viscous?

I love it!!! I can't wait for the next installment. What a great idea!

Nate, a viscous struggle is a slow drawn out struggle, kinda like viscous snot.

Anna, Travis did sleep in the tent.

I'd also like to hear Mike's story about the ring on the board at the Wilkinson Center.

Does this mean I am a hussy? I did marry him so that should count for something, Right?

I love the male perspective. It seems the lady-version is always the one that goes down in history. Good to set the record straight for posterity's sake.

In other news, your cousin Wendy says she is in for our lunch in Carlsbad, which according to her will be in 2011.

I may have allowed you into the family due to your hatred of country music, but you're still on thin ice due to your unhealthy obsession with cheesy 80's music. Anyone who counts Erasure as one of their top "bands" has issues. But it's too late now. So welcome!

I love your stories & I like the month of Nov. how you posted EVERY day! I miss it!