Pretend this came to you in an envelope!
If I know you, (and your address) it will actually come in an envelope...hopefully soon!  If it never arrives, well...you have this...! 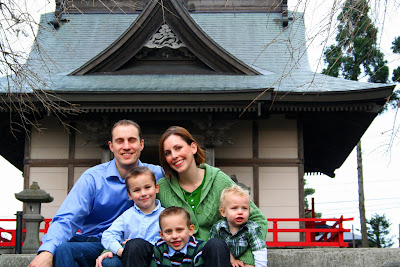 From the Mixed-up Files of the Douglas D. Warner Family
12/18/08
This year has brought many changes into our lives starting around the beginning of July when we (miraculously) sold our home in Rhode Island and moved far, far, (far) away...to Japan.

First and foremost, Doug’s wardrobe has taken a decided turn for the worse. Lately he’s been showing a startling inclination towards drab olive green and brown. It’s amazing I even let him into (or out of) the house like that! Strangely, though, it seems to be the trend in this neighborhood so no one even gives him a second glance! One of the biggest changes for Doug is that he’s no longer a student or even a resident. He is the Pediatric Dentist for the entire Misawa Air Force Base. (And yet, he still has to take orders!) He loves it and the kids all seem to love him.

As for me, Emily, I have been extremely traumatized by a sudden decrease in my usual retail shopping options. There are no Targets in our new neighborhood. No Costco’s, either. It’s been incredibly difficult going cold-turkey, but I’m making progress and finding some solace in on-line shopping, the “100 Yen Store”, and pottery. (Starting in January, I get to teach two night classes; wheel throwing and hand building!) Mostly though, I just chill at home and try to convince the boys that I really am allowed to use the computer and occasionally make a phone call during daylight hours. (Some things never change no matter where you live.) As for the boys, well...

Max (7) has been heard to exclaim both “I ate seaweed and I LIKED it?” followed shortly (when he regained his senses) by "I do NOT like Sushi”. He has discovered the beauty of martial arts (i.e., sanctioned violence sometimes involving swords and sticks) and is taking piano lessons. (So I’ll let him take drum lessons later!) He is now in first grade and has a marvelous and patient teacher who will probably be sainted by the end of the year. His favorite thing is reading at night with Mommy. (Turns out, Daddy stinks at doing different voices and accents.)

Sam (4.5) says he just wants to go back to New Yoke, (He never did catch on to the fact that we lived in Rhode Island) but is mostly happy because all of his Lightning McQueen cars made it to our new house successfully. He goes to preschool three days a week (sometimes even with SOCKS on) and has only been forced screaming into the carpool car a few times!!! Sam enjoys routine, his nightly lullabies, (including Rock-a-by-Baby cause it’s “so beautifoe”) routine, and things that don’t change. Ever.

Gabe (19 mns) is exhibiting disturbingly familiar signs of being yet another boy who loves wrestling and sword fighting. Despite being exposed to his mother’s collection of dolls and dress-ups (kept on-hand for small female visitors, of course!) Gabe is changing from our sweet and happy angel baby into a sweet little devil toddler. hmphf. Luckily, he’s still adorable so we love him anyway.

And we love you too! We hope you’re all doing well and having a fabulous Christmas season. Don’t ever change! (Please. Sammy is begging you.)

As always, if for some strange reason you want even MORE information about our lives, you are welcome to check our blogs!
Em: www.actegratuit.blogspot.com
Doug: www.fromcoast2coast.blogspot.com

Email ThisBlogThis!Share to TwitterShare to FacebookShare to Pinterest
Labels: Christmas

Cute picture! And Merry Christmas to you and your family! :-)

LOVE the picture! Hope you had a wonderful holiday! Merry Christmas!

I hope you had a great Christmas...The picture is lovely!

I'm trying to handle the transition right now of my 21 month old baby to devil toddler. I just might cry it's so sad. WHERE'S MY SWEET BABY?