A Girl Has Needs

Doug says I'm the most sentimental girl in the world. And it's sorta true. I do love things with meaning. I loooove heirlooms, and antiques, and tradition, and things with symbolism and meaning and...symbolism! That's why I have a new place to shop! The NY Metropolitan Museum of Art On-line Store!!!   It has ton's of cool stuff.  All of which is somehow related to great works of art.

I stumbled upon the following items shopping for a new calendar.  I REALLY need a new calendar if I'm going to get my life in order in 2009.  I use mini wall calendars because they're small enough to fit into my purse, but cute enough to hang up at home.  Unfortunately, the BX bookstore only has two options of the mini variety: Dilbert and Mary Englebreit.  Been there, done both of those.  (Hey, I'm a woman of eclectic tastes.)  So I went to the Met store and I immediately found just what I needed:
Season's of Impressionism Mini Wall Calendar.
This calendar features the work of famous Impressionist and Post-Impressionist painters Vincent van Gogh, Claude Monet, Paul Cézanne, Édouard Manet, and Alfred Sisley, among others. Bold brushstrokes convey the sense of each season, from the vibrant tones of the autumn harvest to the delicate hues of spring flowers, from the icy shades of a winter landscape to the sultry tones of summer.12-month format, including mini calendars of July–December 2007. 7 in. x 14 in. when open.
Original Price $8.95
Member Price: $2.02 each
Non-Member Price: $2.24 each
Hellooooo!  It's perfect!!
And even better, it's on sale!)
But who wants to pay shipping and handling on a $2.24 purchase?  Not me!  So I started looking at some other sale items and found these:
The Sumerian Ring 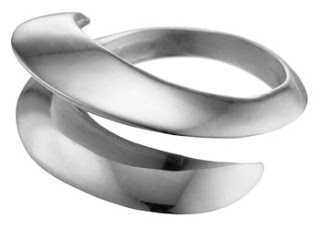 Ur was the most powerful of the Sumerian city-states in Mesopotamia about 2500 B.C. The ring is based on an original Sumerian pair of earrings dating back about 2600–2500 B.C. They were found in a tomb at Ur, along with vast amounts of other jewelry—testimony to the opulence of Sumerian life as well as to the skill of Sumerian craftsmen. Produced in cooperation with The Walters Art Museum, Baltimore.
Sterling silver. Width 7/8 in. Available in size 6, 7, or 8.
Original Price $110
Member Price: $49.50 each
Non-Member Price: $55.00 each
The Spiral Filigree Ring 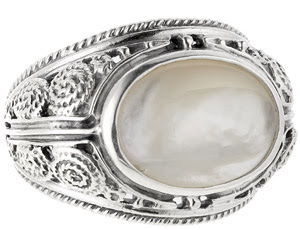 Marie Krivánková (Czech, 1883–1936), a famous designer in Prague during the first quarter of the 20th century, made abundant use of both filigree and spiral motifs in her work, and combined these elements in a sensitive, yet unconventional way to produce jewelry of timeless elegance. The design of our ring is based on an extraordinary silver brooch (ca. 1912) set with an amethyst stone. Produced in cooperation with the Museum of Decorative Arts, Prague-UPM.Sterling silver, lightly antiqued, with mother-of-pearl. Width 5/8 in. Available in size 6, 7, or 8. 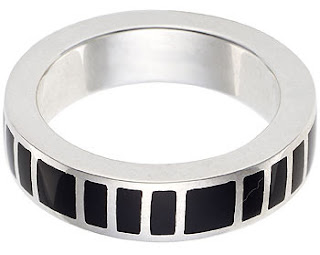 In 1939 in Suffolk, England, archaeologists uncovered the Sutton Hoo ship burial, which had remained undiscovered since the 7th century A.D. The burial chamber, erected in the middle of the ship, contained the extraordinarily rich belongings of a king, most of which are considered the finest examples of Anglo-Saxon craftsmanship ever discovered. The design on this ring is based on the border of a jeweled purse lid found during the excavation. Produced in cooperation with The British Museum, London.
Sterling silver, hand-inlaid with black agate. Width 3/16 in. Available in size 6, 7, or 8. 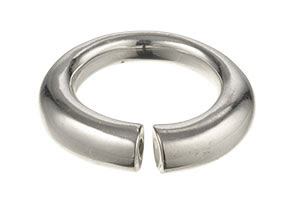 The Viking period began when Scandinavian warriors, driven from their homeland by social pressures, political strife, and quest for trade, raided coastal lands in the British Isles and Europe, even reaching North America. Aided by their swift, elegantly built ships, the Vikings (named after the Old English word for “pirate”) explored and colonized vast regions, trading from Greenland to Constantinople. Viking men and women wore jewelry as a visible badge of wealth and status. The decorative vocabulary of weapons, pins, brooches, pendants, and buckles made of precious metals and bronze was dominated by stylized animal patterns, sometimes reaching an abstraction of great complexity and sophistication. More simple pieces, such as neck rings and thick metal armbands, are notable for their size and extravagant use of gold or silver. The Museum’s ring is based on a torque-shaped armlet from the late 6th–early 7th century. The original is made of silver and was found in the Ukraine with a hoard comprising over one hundred silver objects thought to represent part of the treasure of an unknown local ruler. Produced in cooperation with The British Museum, London.
Sterling silver. Width 1/4 in. Available in size 6, 7, or 8.

Wow. I'm sorry you didn't even get the calendar. I'll see what I can find for you here. Also, way to go with the whole job thingy! That sounds like the most perfect job. Ever.

I never said any such thing!