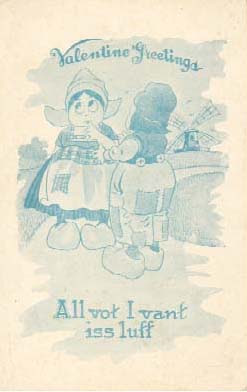 Since yesterday was Valentines Day, (and let's face it, Valentines Day is mostly for chicks) I got to choose how we would celebrate. (Oh, and it's still my birthday month so I can still do whatever I want...sorta.)

I decided to use my limited power to see a chick flick in the theater. Now, generally, this is the type of movie Doug will watch with me once it comes out on video...and once we've seen all the other big blockbusters that came out around the same time.
When and if we do go to the theater, which is rarely, it's to see something a little more action oriented. (The last one I remember seeing with Doug: Mr. and Mrs. Smith.)
So last night, my personal Cupid gallantly and without complaint, accompanied me to see Music and Lyrics with Hugh Grant and Drew Barrymore. (Despite the fact that he can't stand Ms. B-more.) He even pre-bought the tickets on-line and arranged for the babysitter so I didn't have to do a thing. 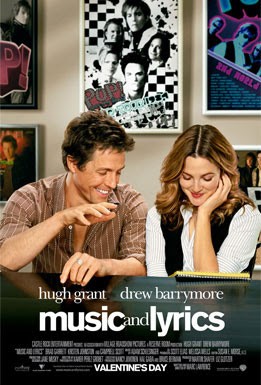 Now, before I read any reviews or hear the opinions of any of my smart friends, I'd just like to say that WE LOVED THE MOVIE!!! That's right, BOTH of us. Now, if I had to pick it apart academically, I could find plenty of flaws.
But I DON'T WANNA!
All I'm gonna say is, it had fabulous 80's elements, lot's of humor, and it was CLEAN! I didn't have to cringe through a s.e.x scene and there were no gratuitous F-words thrown in for shock value. Although I don't have the same emotional attachment to Hugh as I do to John Cusack, he's second on my list of favorite male actors. After all, he has an English accent, he's a great actor and he was AWESOME in this part.
In conclusion, I give the movie, and Valentines Day, two thumbs up!!!
I HEART FEBRUARY!!!
*P.S. Thanks for the awesome Valentine, Felix. I LUFF it!

"Birthday Month?" You flatter yourself. Consider this a "fist of furry" flying in your face. As for chick flicks....well let's just say that they aren't as bad as I made them out to be all of those years. Don't get me wrong, I'd much rather see something else but when you have Blockbuster On line you don't have to be so choosey.

can you comment on a comments? rules be (beaver) damed! mr. underhill, you've come a long way. and when or if i ever get the courage to let a babysitter o'er see miss dub, this will be our first flick. and thanks for enduring pride and predjudice with me the other night. (oops! did i reveal too much?)

i'm so glad to hear all the good news about this movie, because one day, if i ever get this baby to take a bottle, i totally want to see it.
probably through netflix, alas.

Beaver Damed and all! I have been excited to see this one (don't tell the movie police R.G.S) We haven't had our weekly date night in two weeks and M will see this one with me asap. He even buys me my own box of Milk Duds because he won't share his. Good job Buggie. Emmy deserves the best.

Listen Underhill, just because YOU don't get a birthday month, doesn't mean you get to shake your fluffy fist at me! And furthermore, I know you like Erasure deep-down so quit pretending! That said, I'm glad at least you're maturing enough to watch Pride and Prejudice with your wife. That shows great strides towards genuine manhood.

(Yes, Mrs. Dub...you can definitely comment on comments. In fact, Doug and I had a little "disagreement" on someone else's blog-comment-section just last week. Sorry Lindsay!)

Glad to know this is good because we were going to see it on V-Day but chickened out due to crowded movies that night (I always end up next to a talking idiot), so we're saving this for a weekend matinée.

Good review - I may even be able to use it to convince my husband to watch his annual chick flick with me. Usually I crash and burn on any selections I make that aren't bomb related but I'll have to give this one a try.

Okay, I'm all for a "chick flick" assuming that I makes the chick feel romantic. I don't think that we should damn the Beav. he was swell.... Why does underhill have his fist in a mcflurry? FHP

spelling correction for above comment. it should read " if IT" not if I since I don't seem to very well. FHP

No problem...I loved your little spat! It was cute. But as for chick-flicks, Michael always makes fun of them while we watch, so he has been banned from watching them with me. He hasn't complained about it, though...maybe that's not a great punishment...

i looooved the movie.