We had a goal in mind when we left Inakadate, unfortunately, we had neither directions or even a specific location.  Just a city--Goshogawara--famous for its pottery.  Within Goshogawara, we were hoping for a sign.

We were hoping we'd see some kind of Pottery road sign (Is a little English too much to ask? Yes.) pointing us in the right direction to a place I'd heard of.  No such luck.
So, we did the next best thing and went to some random museum:  Tachineputa No Yakata.

D-Fresh had looked it up earlier and we figured it was--at the very least--something to do.  The museum is pretty cool and houses three very tall Tachineputa floats.


Doug's Blurb entry:
These floats are similar to the Aomori Nebuta floats except they are build straight up. They are huge doll lanterns 20 meters tall. The tradition began in the 1900's.  The Neputa were a symbol of wealth and power. They were shouldered by 100 people through the streets.The blue prints were lost in the 40's after town conflagrations. In 1996 fortunately some photos and blueprints were found and Neputa in Goshogawara was revitalized.
I took Max and Gabe into the paid area to see them. We went up four stories to see the top, then the walk way spirled around them to the bottom. They were quite impressive and Max and Gabe were amazed. Sam got to peak at them too and thought they were awesome. 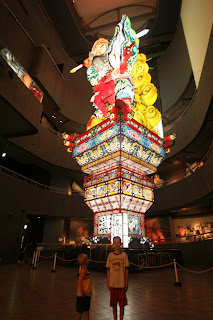 The best part of the museum for me (besides getting an ice cream cone) was that they had directions for the POTTERY.  Not only that, but the little map they gave us made it look like it was very close.

So after the requisite ice cream stop, we headed out in search of the pottery a few short blocks away thinking it would be NO PROBLEM to find it.

Approximately one hour later, we found the Kanayamayaki Pottery Studio.  Turns out, the map we got was accurate, just not even remotely to scale.  NOT EVEN REMOTELY!!!
Luckily, it was worth the long (LONG) and frustrating trip to the boonies! 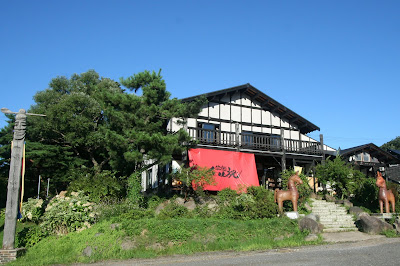 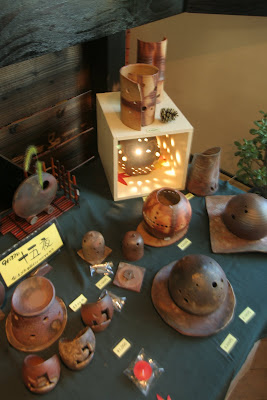 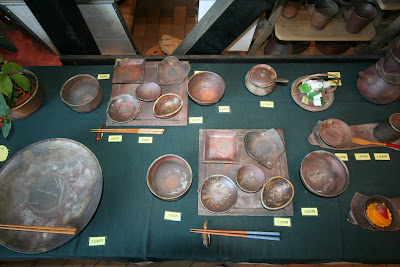 99% of these pots were unglazed.  They use various combustibles (like rice stalks) wrapped around the pots in the kilns to get the cool patterns and colors. 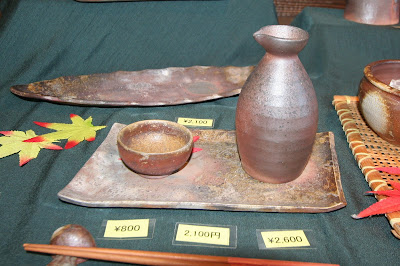 Neat little Sake or sushi set or something. 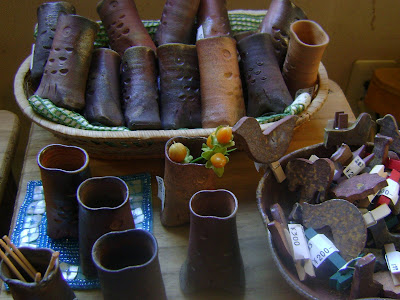 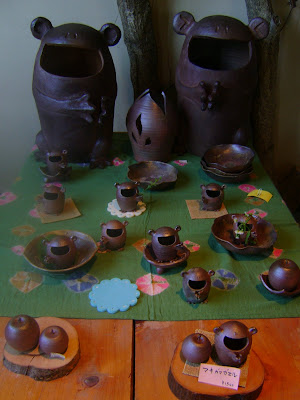 (The red is paint not glaze.  It looked cool though...) 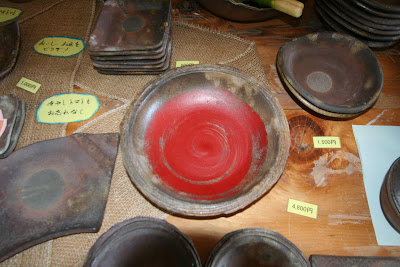 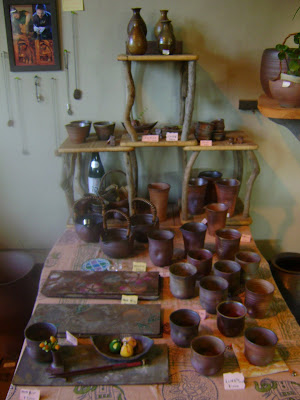 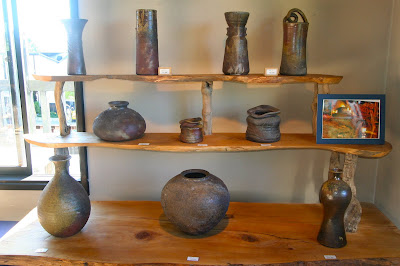 The upstairs gallery was especially cool 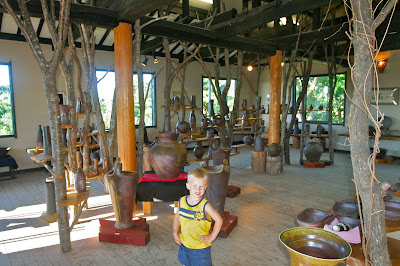 I want the below shelf thingy for my house.  With the pots included. 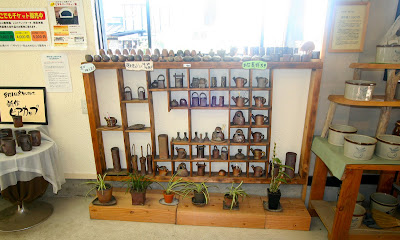 Oh, and I want this outdoor sculpture garden.  With the pots included. 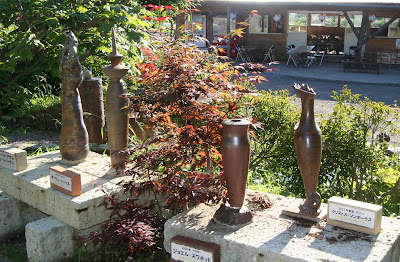 This is their seven room wood-fired step kiln.
(I'd say I want this too, but it's probably a little excessive for my needs.) 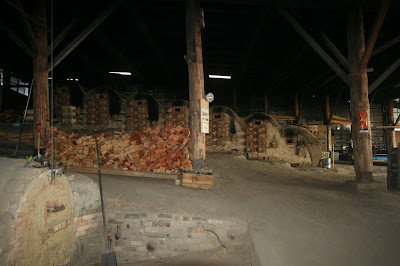 And finally, a pretty little outdoor work area.
(Yes, I want one of these too.) 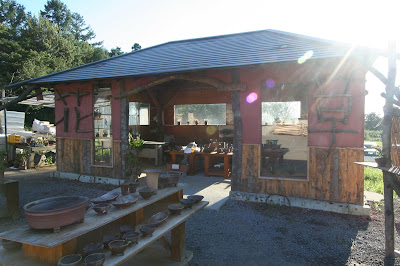 A good time was had by all.  (Mostly me though.) 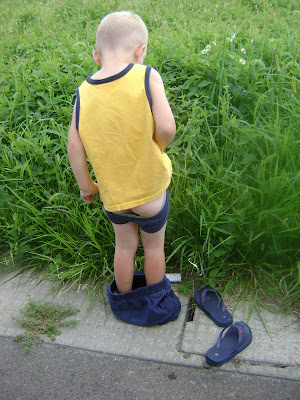 One stop left on this grand day out.  Maybe I'll tell you about it tomorrow.  Or next week.  Or never.  Let's just play it by ear, shall we?

Verbatim from a brochure we got at the museum, including spelling and punctuation errors:

Tsugaru Kanayamayaki
Mt. Bonju is a famous district of "Sueki" archaeological ceramic about 1,000 years ago.  The pottery uses a good quality clay that is heaped up in a reservoir is baked in wood fire kiln.  No glaze on it, and it's baked slowly in a high temperature about 1,360 C.  The technique is called "Yakishime (stone ware)" and it gives natural depth on the surface.  You are always welcome to the pottery facility IT has 7 wood fire kilns and can you have an experience of the ceramic art class.


Tachineputa
The neputa floats of Goshogawara reached a grand height in the Mejii period.  As electric cables came into use, the height of the neputa floats had to be reduced.  With the discovery of a photograph and the base drawing of a neputa float, a group of local volunteers decided to reconstruct a giant 22 meter neputa float in 1996.  The neputa float was offically named "Tachineputa", and the festival was brought back in 1998 for the first time in about ninety years under the name "Goshogawara Tachineputa".

Love it...that's awesome! love the peeing picture too! We've had to do city training since being in phx....why it's NOT ok to pee in the front yard like it was in Utah! :)

wait... what happened to your dirty laundry post? I was going to comment and tell you how i get all my laundry done in one day.. wait two days to do it again..and again... cause i'm awesome like that! Fine! Your pictures are great from this adventure!

Wow, what a cool adventure, but maybe not so fun while looking for the pottery place, with kids. The pots are beautiful and it looked like some of the prices aren't too bad. I'm very envious.

That was a great story about the miss sent check.

I hope your own clay adventures are coming along. I love Pottery Making Illustrated. I hoped its helping.

Great to see the pottery photos. Thanks for commenting on my blog and letting me know about your own post. I envy you the ability to see these Japanese potteries. Would love to do that some day.