Here's how it went down:

Merrill called us on Monday night.

"I'm coming home early.  I'm going to fly in Saturday morning.  I want you to help me surprise Janeen."

We immediately planned a "Farewell Brunch" for the soon-departing families.  We told everyone to be at our house Saturday morning at 9:30.

The families on their way out wondered why no one bothered to find out if they'd be at their own farewell party.  (We could have put a little more thought into it...)

It was a looooong week.

On Thursday, Janeen got suspicious.
I, of course, was the model of calm, cool, collectedness.
Doug...not so much!

So when Janeen cornered him, looked him right in the eyes, and said
"Doug!  Do you know something?!?!?"
It took all he had to look back at her innocently and mutter "nuh uh!"
Bullet dodged.
Suspicion averted.

(I hope Merrill appreciates that we're both going to hell for him.)

Saturday morning FINALLY comes.  Doug goes to the airport.  I set up the party.  People start arriving.  To ensure she'd be here, I told Janeen I needed her help.  She arrived, saw that I had things under control, and left again to change outfits.

People wonder why I'm pacing nervously all over the house.
Why Doug isn't around.
Why I have the phone glued to my ear and I'm neglecting my guests.

I find Max.  "RUN to Miss Janeen's house!  Get her out of her bathroom and tell her I need her RIGHT NOW!"

I finally discover she's been waylaid by a neighbor and is helping said neighbor cut fruit for the party.

Finally, FINALLY, I see her walking across the lawn.
30 minutes late!!!  For 30 minutes "the package" has been cooling his heels and just WAITING!!!!

I make an excuse and pull Janeen to the front of the house.

Finally, FINALLY the car pulls up.


Most people are in the backyard, but the people around me turn to stare since I'm obviously not crying.
And then... 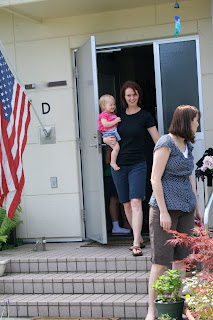 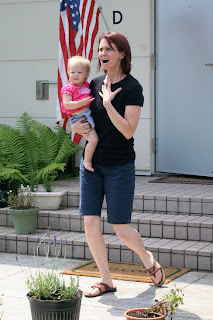 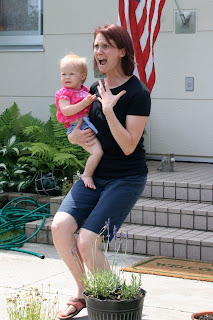 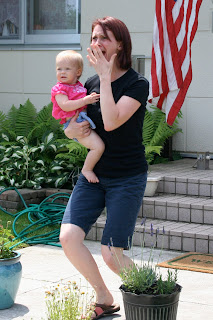 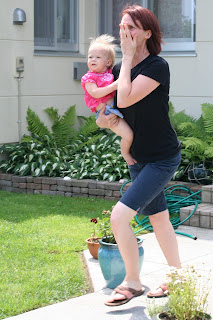 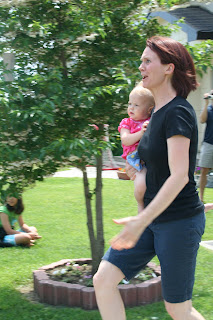 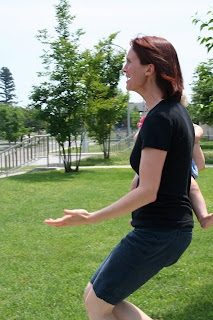 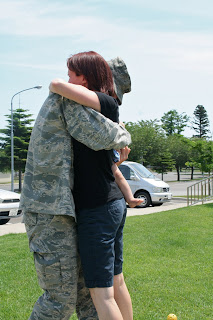 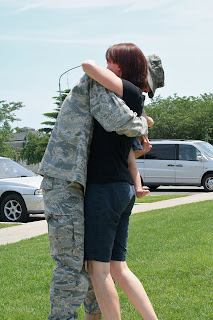 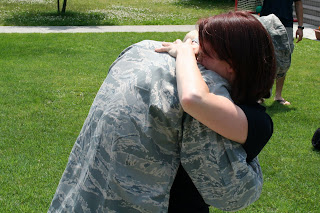 He worked on disrespectful prisoners who lied and threatened him.   (And had really really bad teeth.) 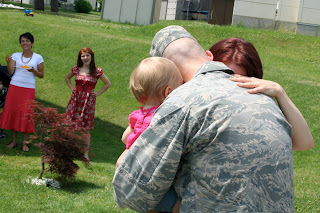 He missed more than half of his baby's life. He carried a gun every single day for 7 months. 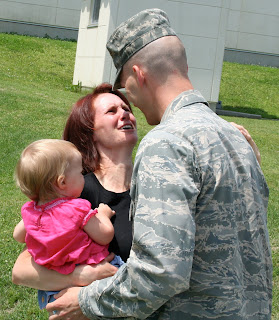 But he served--and returned--with honor.
And now Janeen finally has her husband back... 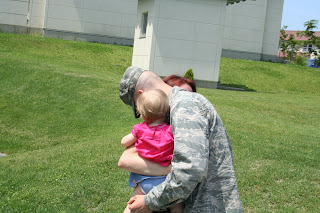 Four little kids finally have their Daddy back... 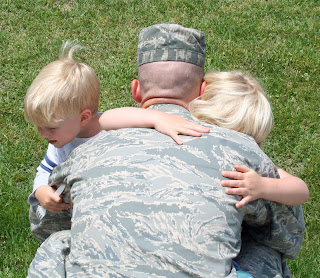 and Doug finally has his friend and office-mate back.
Welcome Home Merrill!
WE (really) MISSED YOU!!!!!!!
Oh, and THANK YOU!!!

Email ThisBlogThis!Share to TwitterShare to FacebookShare to Pinterest
Labels: deployment, Living in the Military

Yes, thank you for making me tear up.

But that was pretty awesome.

You weren't joking about the tissues! But man, what an amazing day for them.

Okay, that did make me cry! What a wonderful surprise! Kudos to you and whomever took those pictures!

Those pictures are priceless!

Still makes me cry!! It was awesome, well worth a little stretching of the truth!

Tell Merrill THANK YOU for his service to our country!!!! We are so grateful to people like him!

Wow. What a moment. Like everyone else I'm wiping away a few tears. Thanks for sharing it with us.

I was going to make a comment about Doug and not being able to deceive, but then I kept reading and before I knew it I was crying and now I can't remember what I was going to say. So make fun of Doug for me. And thanks for sharing about Merrill.

You're right...I should have found some tissues first. Thank you! That was beautiful!

Wow - that is the best story. I love all the action photos. They made me tear up with JOY!!!!

the pictures were perfect! Thanks for sharing this wonderful story! sniff sniff!

Awesome awesome AWESOME! I love the pix from outside. Absolutely priceless. :-)

You weren't lying about the tissues...Yikes! So happy Merrill is home and they Alley's can all be together!!

Tears and more tears. Those pictures tell such a great story. I needed two tissues! Thanks for sharing!

I'm crying now. So glad he's back and loved the pictures and commentary. You guys are awesome!

This is Merrill's mom speaking: Great camera work. Thanks for letting us share in that wonderful reunion.

We love your posts. Thanks for sharing this reunion. We all love and pray for all our servicemen and women and appreciate their service and sacrifice. I too got emotional and still have wet eyes while wrting this. Thank You Merrill, Doug and all of you there.
DSC

Great to have Merrill back.

Wow... that made me cry and reminded me of many of those moments.... I hope you do not mind but I linked this story to my blog this morning.
http://ourgregoryclan.blogspot.com/2010/07/what-made-me-cry-this-morning.html

Woo Hoo! good to hear he's home again. Thanks for capturing and sharing this Emily. This is awesome.
Spencer (Alley's HS friend)

The best surprise ever!! Love it that you got pictures - her face says it all!

My husband hasn't even left yet for his 'all expenses paid vacation to a beach with no water' but I am already looking forward to his homecoming! Thanks for the great story!

(came over from Modern Gypsies)

Yay! I'm so glad that they're back together at last. What a great day for everyone.

oh my! I missed this post. I am so glad I went back an re-read. I had a husband who deployed and so this really touched me! What a great friend you are.

Awesome. And a perfect 4th of July story!

What a great day!

Those pictures could have told the entire story!! Thank him for his service. Thank you for sharing.

As an Army wife all I can say is Ahhhhhhh! I am guessing all was forgiven.