This morning as I sat in a peaceful daze reading post after post in my Google reader, cereal bowl empty beside me, a jarring thought suddenly occurred to me:
"Why am I not vacuuming?"
(And why is Backyardigans still on if Sam is at Preschool?)
Then I remembered, "Oh!  I'm not vacuuming because Gabey is still asleep and I don't want to wake him up!" (guilt assuaged) Followed immediately by "Why is Gabey still asleep?  It's 9a.m.!?!?  What if the monitor isn't on and he's been crying for an hour!"  (panic) at which point I turned up the monitor sitting right next to me to hear...
Seagulls.
And crashing waves.
See, two nights ago we set-up this little gadget: 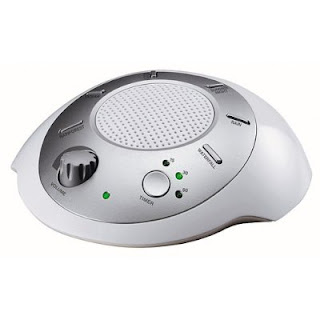 the HoMedics Sound Spa ($24.99 at Target.com) in the hopes that Gabey's sleep wouldn't be so often interrupted by noisy brothers.  (Evidently Doug set it to Ocean last night.)  It seems to be working!  It is now 9:05 and he's still asleep.
Praise Be and Hallelujah!
While I could use this time to, say, fold laundry, I think I'll keep reading.  You shouldn't turn up your nose at little blessings!
Even if they come by way of Seagulls!
P.S.  It's now 9:25.  Gabey is just waking up (possibly a new record) and making a squawking sound.  I think he's talking to the Seagulls.

Email ThisBlogThis!Share to TwitterShare to FacebookShare to Pinterest
Labels: Gabriel

Princess of the Universe said...

The laundry and vacuuming will sooo still be there...the precious break should be cherished :)

Sounds like a wonderful morning! And it's true... the laundry will always be waiting! Ignore it while you can...

Get the laundry done woman!

That's awesome. For some odd reason, we have the same issues...two obnoxious boys (shocking, I know;)) and Preslie in the midst of it attempting her naps, but a loud scream, crash or the stomps of two roudy boys chasing each other through a VERY tiny house, seem to interrupt her sweet dreams. I might have to get one for myself. Besides I could use the ocean right now! Love ya Em