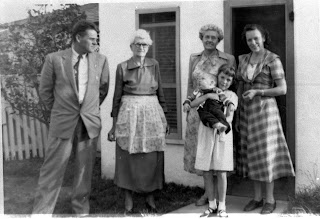 When my mom was a little girl who still went by La Fae, her paternal Grandma, Effie Barson, lived in a little cottage in their backyard. Grandma Barson was always sewing and one day dropped a needle. My mom found it and Grandma exclaimed "You've got Eagle Eyes! You found that for me! Thank you!" My mom said "when you're the middle child of seven, you don't get many compliments. So I always remembered that."
------------------
Once when I was a little girl, I remember being at the dinner table at the Dimicks--my mom's best friend. I was probably being babysat. One of the kids next to me reached for something and knocked a jar which started to tip over. My hand shot out and caught it before it fell. Larry (the dad) said "Wow Emily! You have quick reflexes!" I don't know if I blushed, but I was very pleased with the unexpected compliment. (Obviously, I never forgot it and probably believed him for a long time until my clumsiness proved him wrong.)
------------------
A few weeks ago, we had a big snow storm on a Friday night. Saturday morning found all the kids and a handful of parents outside playing in the snow. Max was up at the neighbors helping them build a giant snow man. That night I climbed up on the top bunk to give Max a good cuddle before bed. It was quite for a minute and then Max said "Aaron's dad said I'm the best boy."
"What Sweetie? When did he say that?"
"I was helping him build the snow man and he said I'm 'the best boy in the whole world!'"
Max's eyes were wide and his face--with little half smile--was practically glowing.
------------------
Max is a very busy boy. He's pretty hyper and smart and mischievous and tends to instigate mischief. This means he's getting reprimanded far more often than he's being praised for his good behavior. His comment made me a little heart-sick as I wondered how often he's been complimented by an adult other than his parents. It sorta made me want to go give Aaron's dad a big old squeeze. (But that would have been a bit awkward. We're not that close. Though I did tell him later how much I appreciated it.)
So do me a favor. Next time you're around the neighborhood trouble maker, (or any kid for that matter) try to catch him or her doing something good and pay a sincere compliment.

They just might remember it for a life time.

Email ThisBlogThis!Share to TwitterShare to FacebookShare to Pinterest
Labels: I can be serious sometimes

I love this post! Thanks for sharing, I am absolutely going to focus on the positive!

Great post! All kids need compliments. I know that sometimes grownups get wrapped up in other things and don't think to say thanks, or to praise kids, and I think kids need that praise most of all.

I love this post. I've always had a soft spot for trouble makers and I think you are 100% right about them needing positive reinforcement even more than most.

Wow, Emily, you sure nailed that one. You got your Mom to sit here and CRY! Good writing, great message for us all! Thanks for writing it. The picture, in front of Grandma's cottage, features Uncle Mac (Aunt Ree's husband, and Lyns dad) and Aunt Sylvia (My dad's sister).
What a wonderful job you did on this. I'm so proud of you. As the baby of the family, I hope you got LOTS of compliments, as well as the expected teasing. I love you.
Mom xoxoxoxoxoxoxo to all the boys

Aw, he is a good boy! He just gets a little too excited sometimes.

Good to remember...Max is such a sweetheart and he's so funny!

I really love this post Em! Look at what an amazing sense of humor you have and a tender/sensitive side too. You are an amazing writer. Thanks for the reminder!

Is so true. Especially since my kids are the troublemaking sort.

I go to Nie Nie for tears, acte gratuit for laughs...but this time you made me cry. Everyone appreciates and NEEDS praise, even those you might not think need it, they need it too.

Great post, Emily!! Great post! I often feel the same way about my first born son. The world can be rough on them...why not make it more uplifting when we can. It'a a pleasure to read...

Thank you! I have a little guy who is often an "instigator of mischief". This is a good reminder to praise him for the little things - since I certainly scold him for little things. I learned about a year ago that one way to keep me from scolding too much when I'm getting frustrated with him is to tickle him. Instead of loosing it emotionally I let my hands tickle him until we're both collapsed on the floor laughing. I don't know how much longer that will work (he's just about to turn 3) - but for now it brings the peace back to our home pretty much every day.