It's My Birthday and I'll Blog if I Want to!

I meant to blog the other day about the Snow Festival, but I really wanted to get caught up and blog about our trip to Aomori first.  But to do that, I had to show this video.  And to do that, I had to MAKE this video.  So, I'm a bit behind, but IT'S MY BIRTHDAY so I can do what I want!  Don't boss me!!!
Anyway, I'm getting faster and more proficient with this video stuff.  It's becoming quite fun, in fact.
But before you watch, here's a little background on our adventure:  Misawa is in the Aomori Prefecture.  The city of Aomori is the capital of the Aomori prefecture.  (A prefecture could be compared to a State in the U.S.)  It's about 1.5-2 hours north of us (depending on the weather--it was quite snowy when we went.) and houses the Aomori Art Museum.
We were invited by some church friends (we'll call them the Eff family) to caravan with them to visit the museum because the wife knows I like art.  She has a master's degree in Watercolor (how cool is THAT?  I'm going to take lessons!!!)  and he is the new E.R. Doc.  (They got here just a few weeks before we did.)  They have two really cute little kids, a boy and a girl.
Anyway, we drove on up and were impressed with the cool modern-y building the museum was housed in.  Unfortunately, we weren't as impressed with the contents.  Mostly because there just wasn't very much to see. 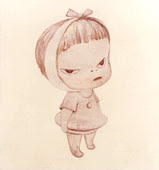 The first gallery was awesome and held three huge canvases painted by Marc Chagall that were used as backdrops by the New York ballet.  But other than that, there weren't many offerings from well known artists and the things they had by local artists were just sorta..."eh!"
i.e.:

But I still enjoyed it and maybe sometime they'll have an awesome exhibition and we'll go again!
Enjoy the movie!  If nothing else, I know you'll love the song!  (Unless you're my mom.  She's more into Josh Groban than Coldplay.)
Anyway, here you go:
P.S.  It's my Birthday so LEAVE A COMMENT!!!

Email ThisBlogThis!Share to TwitterShare to FacebookShare to Pinterest
Labels: My Movie-Making Career, Travel Adventures in Japan

First to comment!! I'm the winner! HAPPY BIRTHDAY! Can't wait to sit on the beach in Hawaii with you in a few months. I'm also quite relieved you don't weigh 82 lbs. I wasn't going to be your friend anymore. Also, I would probably shove a feeding tube down your throat. Only because I'm a friend...where was I? Oh yeah, HAPPY BIRTHDAY!! (Again). Miss you. When are you going to be my state neigbor?

HAPPY BIRTHDAY EM!!!! And I am so jealous I want to go to Hawaii too! Can I be your stowaway?

Happy Birthday Emily. Have you received your Disney Dollars yet? Lets spend them together at Tokyo Disneyland. Or at a Disney store in Hawaii.. When should we meet?
Love, Dad

Happy Happy Birthday. How old are you 25? I loved your video. Escpecially the bathroom. Let's just say my OCD went into overdrive. I am glad to see that you are up again among the living.

HAPPY BIRTHDAY EMILY!! I hope it has been a great one! I will even tell you I LOVE YOU (in a blog-stalker kind of way) but I will NOT retract my statement as I obnoxiously laugh and say just joking like those mean Japanese people. Don't they know that everyone needs to be loved? Jesus said love everyone and treat them kindly too.

anyway, you are thebomb.com and I hope your day was great (though i wonder if it would have been better spent deliriously dreaming and hanging out with old abe lincoln again.) no? I am sure your kids and doug were way better!

Happy Birthday! (because I know every birthday greeting is nice to get even if it's from people you don't really know. right?) :)

Well happy birthday, I am escaping the hospital tonight so not so much free time, but i'll still comment just because i know you love it so much, glad to se your oin better, can't wait til i"m over this surgery, TTFN!

Happy Birthday Emily!! I love reading your blog about all your fun adventures in Japan . . . I love how you guys are always exploring! So fun. Hope you have a great day!

Happy BIrthday Em!! Great video. I laughed out loud at "Happy Drug"! And Sammy is so cute! Have a happy birthday... in mean month!

Happy Happy Birthday! So glad you are back!

Happy birthday - hope it's a fun one! Blogging is far better than crying - so good choice.

Happy birthday dang it! If I wouldn't have been so exhausted yesterday and had one functioning brain cell to try and figure out the time difference between here and Japan, I would have called to sing you a lovely rendition of happy birthday. Try to envision it and pretend like it happened.

Happy birthday little sis! Love you and hope it was a great day!

I thought about you on your Birthday but not to sing.... that would be curel to you. So I'll just say I hope you had a Wonderful Birthday!I loved seeing your road trip. I was a little sad to see the McDonald's looking like McDonald's somehow it should look different..it's Japan but since I just got back from the doctor with a big scratch on my eye ballI would like a 'Happy Drug' that I saw along the road:) Just joking!

I love your your blog

So I know that I am not the 'professional blogger' yet but sometimes I have good things to say...keeping updates on preslie and the family...however I have yet to see my name on your blogger list...I am starting to get a complex...I wonder if in the midst of all 'the blogging' if you've stopped by??.....

Why was Sam playing in the urinal? Is that what they teach the kids over there?