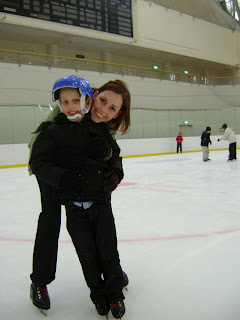 A few days ago Max had his birthday and turned 7.  He got to ditch school, have chocolate chip pancakes for breakfast, go ice skating, eat at 100 Yen Sushi for lunch, miniature golf with Daddy and Sam, and have Mac and Cheese for dinner.  It was pretty much an awesome day except for one thing:  I haven't had the heart to blog about it because the birthday cake I made him was such a dismal failure.
Yes, I know his birthday shouldn't be all about me, but it just didn't feel right to do a birthday post in his honor which featured a cake that looked like a pile of bird poo.  It pretty much broke my spirit.  I haven't quite recovered yet.  But he still deserves to be honored so I'm going to tell you what a great kid he is.  Birthday cake not withstanding.  But first, an update: 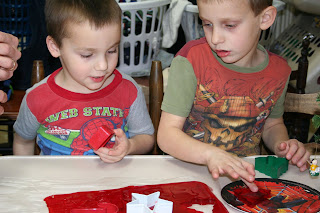 This week Max was officially diagnosed with ADHD.  Now, for those of you who know him, right now you're thinking "Well DUH!  I could have told you THAT!"  But for some reason, I've always held out a little hope that he wouldn't take after his ADD mother and could just breeze through school like his Daddy.  No such luck.
See, Maxwell has always been an extremely busy boy.  As a baby, he was incapable of cuddling.  He was too busy looking around and smiling his big toothless, slobbery, open-mouthed grin to be bothered with relaxing his head on my shoulder.  At 10 months, he was walking--which immediately led to running and climbing.  Around 16 months, he started climbing out of his crib.  So we got a crib tent.  He learned to open it.  So we would safety-pin it.  And he'd open the safety pin and continue his midnight forays to freedom.  He was the same with all child-proofing measures.  He'd just figure out how to open them and continue on his way.  (Who knew bedroom door locks could be popped open just by twisting the knob really hard?!)
His intelligence and independence have been a bonus in many ways.  For example, when I got pregnant with Sam and was sick in bed every morning, Max--at 2 1/2--would get up and get himself breakfast. 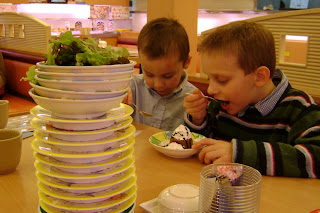 *First, climb over the baby gate into the kitchen.  *Next, climb up on the counter to get a bowl from cupboard.  *Open child-locked top drawer and get spoon.  *Get out box of cereal and quart of soy milk and pour.  *Eat cereal, dump bowl in sink, turn on cartoons.  *Later: sneak chocolate chips & de-fluff couch cushion.
All while I lay in bed groggily calling "Good job, Max!  I'll be up in a few....zzzzz..."
As the years have gone by, Max has always had endless energy, and I've always been endlessly exhausted.  But also highly entertained.  And never, EVER bored.
Here are 7 things I love about Maxwell:
*He is diligently learning to play the piano because I told him he has to do that before he can take drum lessons.  (How cool is he for wanting to play the drums!?!)
*He can make Gabey laugh harder than anyone else.  Like, really really belly laugh.
*He still gets up and gets himself, and Sam, breakfast so I can sleep in.  (until 7:30ish.  He usually wakes up at 6:30ish.)  And he gets himself totally ready for school.  (If it weren't for the other two boys, I could sleep in until 10!  ...and I would.)
*He loves to be read to, and is trying hard to learn to read himself.   (His teacher says he has extremely high language and comprehension.)
*He's good at sports and really good at card games.  (Thanks to Grandma W. giving us Rat-a-Tat-Cat a year or two ago.)
*He's a great photographer.  (Though is interest has waned ever since we actually gave him his own camera.  Evidently it's more appealing when you're using your parents camera without permission.)
*He's very good and finding diapers and wipes and delivering them to me immediately upon hearing me yell "MAYDAY!"
*bonus* He's very handsome and his beautiful blue eyes look a lot like his daddy's.  AND, he loved his birthday cake even though it was ugly.
I sure love my boy and I'm glad we have him in our family.  I can't imagine life without him.
I love you, Maxer!
HAPPY BELATED BIRTHDAY!

Good for you for making Max play piano before drums. As a percussionist myself (yep - I was the "girl" drummer all through school), learning piano is important if you want to play any of the keyboard percussion instruments! Go Max! Happy Birthday!

Oh, I remember that drool!

Claudia said both Heather and Jameson were ADHD and ADD. Both have their degrees. Heather is the mother of 4 and teaches home school and Jameson is a math professor at a community college. You Emily, had an IQ (hopefully still do have) of 149 and were ADD. Max will do fine.
Dad

Gotta admit, I sorta wanted to see a picture of the poo cake.

Happy birthday Max!!! I miss you guys a lot!

Happy birthday Max! I feel your pain with the cake, I spent six hours yesterday making a cake that now looks like a bloated, mishapen marshmallow. I went to bed last night hoping the cake fairy would come and make it all better, but it looks like we're stuck with this one for Madalyn's party tonight.

Extra energy is just more Max for us to love!

Happy B-day (not so) little one!

de-lurking to say that my husband has ADHD and is one of the most intelligent people I know... can multi-task like its nobody's business. Sounds like Max is a smart kid. He'll figure out the ADHD thing, but it sounds like you already know that!

And I wanna see the poo cake too!

Yes, you must post a picture of the cake!

Happy birthday Maxwell!! We love you!!!!!