Saturday night Doug and I got a babysitter so we could partake in a unique cultural experience. I suppose it's not that unique, as it is something that's done in the states. But I believe the Japanese people have a very unique spin on this pass-time and definitely a very proprietary love of it. 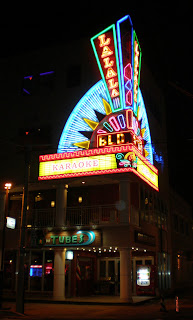 We were invited by a group of friends to a certain establishment to celebrate some birthdays and at the same time, I believe it was also a test. A test of our coolness.
In an attempt to arm myself for the test, I pulled out a little extra help. One of the last polyester hold-outs in my wardrobe. A shirt I haven't worn in years but refuse to get rid of despite Doug's mockery. (He's such a style-nerd.) I acquired this shirt roughly ten years ago. It has seen many parties, dances and even the occasional first date. Sadly though, in the last 8 years of my marriage, all it's seen is the inside of my closet.

Which is why I thought it deserved to accompany me for my first time doing... 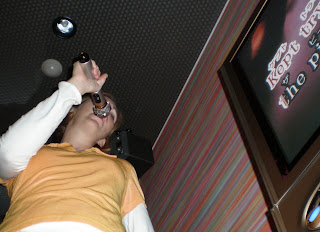 Karaoke.
I think it helped.
I have to say, I was completely unprepared for what awaited me at LaLaLa...

I expected a bar with a stage and a good sized audience. I didn't know if I could get up the nerve to perform in front of strangers. (It's been a long time since my Suzuki Violin days.) Especially drunk Japanese strangers.
But what confronted me was actually a bit MORE scary than anticipated. We were shown into a tiny padded room with a large t.v. and... 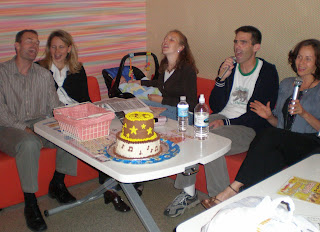 our small group of friends. 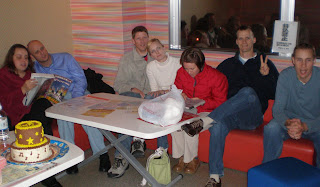 Yep, that's right. No far off stage with a spot-light blinding you to the audience...just a tiny room with nowhere to hide. 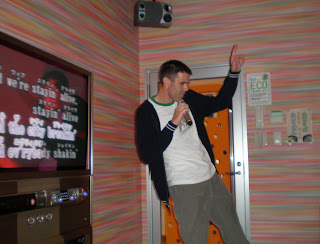 But I had my orange shirt.
And I had "I Will Survive" by Gloria Gaynor.
And I sang it even without the help of alcohol.  (Which I always thought was a requirement for doing Karaoke.)
And I DID survive!
And I liked it! And by the time "Nothing Compares 2U" came on, I could have danced on the table with no shame.  (I didn't.) 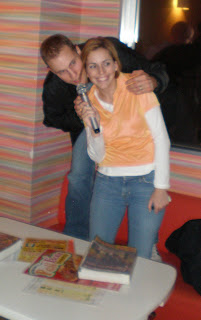 As for the test? Only time will tell if we passed the "are they awesome enough to be our new friends" test. But in the mean time, see what you think...
I think it's safe to say we'll patronize LaLaLa again.
And next time I'm wearing my orange shirt AND my Go-Go boots!
P.S.  You just met half the leadership of our local branch including the Branch President and Relief Society President.  And BOY can those two ROCK!  (I'm not tellin' who's who!)
P.P.S.  Doug made tonight's video for your viewing pleasure.
P.P.P.S.  It's Doug's 31st birthday today so hop on over to his blog and say hello.  And be prepared with something to puke into.  Love you, Babe!  (Wish you were here to help us celebrate again Mike and Lindsay!!!)

Email ThisBlogThis!Share to TwitterShare to FacebookShare to Pinterest
Labels: Living in Japan, Shock and Awe

where are the pictures and videos of the event?!

first time....come one, finish up!

The pictures definitely improve the story!!

Emily, your blogs are inspiring me to start keeping a journal. Hilarious!