Dale-Bud and The Call Kids

Last week my dad had a heart attack.  They took him in to do an angiogram and realized his main artery was 99% blocked and he needed immediate surgery.  A few days ago he had a double bypass and is now in recovery in ICU and doing very well.  He'll have a long recovery, but his heart should be good for another 100,000 miles!
I've been feeling pretty hopeless being here and trying to communicate using Skype and working around a 16 hour time difference.  But one consolation is that all four of my siblings went to Central California immediately and were there for him before and after his surgery.
I knew when I heard my brother Brandon would be there, that everyone would be in much better spirits.  I was right.  Evidently Brandon got kicked out of Intensive Care and subsequently banned by the nurses because he got my dad laughing too hard which was causing extreme pain.  (He was telling the story about Laura, two chestnuts on his mantle, and the vasectomy...It's a good one.)
Aside from thinking and worrying a lot about my dad, I've been thinking that I'm really really glad I come from a big family.  I'm the youngest of five kids, (six if you count my foster brother Ferlando,) and I'm very very grateful for all of my siblings.  There have been times I've been REALLY REALLY mad at each and every one of them, but MOST of the time I like 'em all.  And they each bring a completely unique dynamic to the family.
Let me introduce you:

Karie is the oldest and also a practicing Witch Doctor.  (She may even be an Internet Minister...just like Joey on friends.)  She freely dispenses gratuitous health advice (both physical and mental) and will gladly check your aura/chakra/feng shui-ness if you want her too.  She has no butt to speak of, is an excellent graphic designer, still looks like she's 30, and keeps in touch with ALL of her ex-boyfriends.  (Way worse than me, people!) 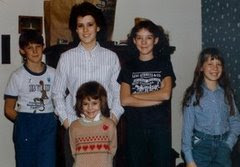 Laura is the second oldest.  She's a tightwad, (but still generous) and a perfectionist which means her house is always pretty darn clean.  She has the best singing voice in the family and the biggest addiction to chocolate.  She tries all the time to claim she's not creative and therefore CAN'T be genetically related to the rest of us, but we tell her to quit dreaming.  She'll never be rid of us. 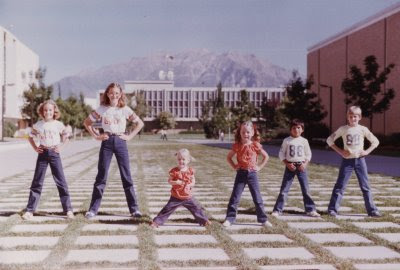 Brandon is stuck in the middle of four sisters, poor guy!  (He claims he still hasn't forgiven me for coming out female!)  He's a computer geek who can fix any computer problem over the phone in 20 minutes or less.  (Usually closer to five.)  He's the family comedian and is one of the craziest people you'll ever meet.  (If you meet him.  Which you probably wont since you're a blog lurker and therefore a complete stranger.)  He's extremely generous and hard-working and is just an overall good guy despite his penchant for practical joking...and in spite of the fact that he sometimes goes through Emergency Exits on purpose (setting off hospital alarms...) and told all of my in-laws at my Wedding Dinner that I had a tattoo on my b-u-t-t.  (I don't.)
(As far as YOU know.)
Ferlando is my Navajo Indian foster brother. He came to live with us (for every school year) starting when he was 8 until he graduated from High School. (He lived with his family on a reservation every summer.) Fernie is a year younger than Brandon and was just as much my sibling as any of them.  Which means he tortured me just as much as Brandon did.  Unfortunately, he's had a rough post-high-school life and I haven't seen him in years. My brother Brandon hears from him occasionally, though!
We like to call Jenny "the Enigma".   (NOT to be confused with Enema.) She was a pretty shy kid, but darned if she didn't grow right into a whole boat-load of assertiveness.  She's the family pacifist and closet liberal.  She's an excellent cook, and semi-vegetarian.  She says she just wants everyone to get along but just when you think you have her figured out, she goes and moons you.   Since Jenny is the closest to me in age, I fought with her the most growing up.  In fact, I still have some tiny crescent-shaped scars on my arms from Jenny's finger nails.  BUT we get along great now and she only gouges my arms occasionally.  (In case you're humor inept, that last part was a joke.)
I'm the baby of the family.  Everyone claims I was the most spoiled.  In truth, I was the most TORTURED!  I was very precocious little kid, very bossy big kid, and very argumentative teenager.  Now I'm perfect and everyone loves me the best.
Well, that's us.  I'm grateful for my big family and glad that even if I never have another kid (I want another kid) my boys will at least have two brothers each to watch their back.
Thank goodness for FAMILIES!!!
Get well soon, Dad!!!

Email ThisBlogThis!Share to TwitterShare to FacebookShare to Pinterest
Labels: Family

My prayers are with you and your family! I hope your dad recovers quickly!!

I loved reading about your siblings! What a great family! I am the baby, too - so I totally understand the torture! It's funny, just tonight I was thinking about doing and ode to my siblings post! I think I will soon! It's way too fun!

I hope your father is feeling better soon.

Thanks for sharing your memories--I have some of my own on the concrete squares and grass grid!

HAHAHA!! Whatever! You should have seen the look on Brandon's face the first time he tackled you and pinned you to the driveway, after you were married, and I said,

"Brandon, you can't do that anymore."

and he asked why, and I said,

"Cuz you never know when she could be pregnant now."

Since he saw you as only being 6 years old, I thought he was going to yak!!!

BUT YOU ARE ALIVE TODAY BECAUSE OF ME!!!!

Hey, I thought since you cameo-ed the sibs, I would cameo the sibs-in-law!

I put their Amazing Race video up!!!

Big families are the best and yours sounds awesome!! Hope your dad feels better soon!

Yeah, for big families, I'm the oldest of six so I did the picking on and torturing in mine.
Hope your dad has a fast recovery. My MIL went through this 6 years ago. She had 3 blockages.

Maybe your witch doctor sister could cast some sort of get-well-quick spell on your dad. Meanwhile, I'll do my own, also know as prayer.

Sending the love across the Pacific.

My dad has had 3 heart attacks so I understand the feelings one has. One thing about it is that it tends to bring the family closer. Looks like he has a great family to take care of him.

Glad to hear that your dad is doing well.

I love that pic of all the siblings at the BYU. Priceless.

What a blessing that your Dad is okay. I am sure it must be such a helpless feeling to be so far away. Good thing you have such great sibs.

I loved reading abt each one of them. It sounds so much like my own, even down to the foster sib. Our indian sister was named Elverna and she really taught me how to fight. I have some of those crescent shaped scars on my arms too. (They weren't from her, but from one of my other 6 sisters.)

Hope your Dad continues to get better.

I love getting a peek into other families. Especially big ones with lots of characters. Great descriptions.

Sending prayers your way! It must've been nice to have a big family! Siblings are everything!!!

So glad your dad is doing good! I loved reading about your siblings-- I'm pretty sure I have met all of them except Ferlando. Keep us posted about you dad!

You're full of it Emily!

I am NOT a tight wad but I AM very frugal! Which incidentally, is why Jeff's law school loans are paid off and why we have very little debt (unless you count our lovely mortgage). However, in spite of my frugality, we are still broke so I must continue in my quest for ultimate frugal living!

And if you could see my house right now, NO ONE and I repeat NO ONE would ever believe what you said about the clean house thing! Just ask Jenny...

Your fav bro in law

I'm here at Christina's recommendation from her post and I'm so glad I followed it! The Calls are one heck of a family and Kris and I consider ourselves lucky to know some of them! (and because of Brandon you always kind of wonder about the others...ha ha).

My family knew Brandon and Christina for a few years (in the same ward in Colorado) and then my husband and I met them when we moved into their ward (a few years after my parents moved out! Small world!)

We have to have our blog set to private only because of embassy security recommendations (we live in Mexico and because law enforcement is a huge target, so is my husband) but I have sent you an invite just to be fair (and to answer the question "who the heck is commenting on my blog?) I sent it to the e-mail listed on your blogspot profile.

Just so you know, I may have to be a regular reader because you had me cracking up with the nutella post (I lived on that stuff in Caracas when we couldn’t get peanut butter ) and it’s nice to see how another mother of 3 boys manages to do it all with a smile!

Just wanted to check in with my former New England neigbor! :-)

Sorry to hear about your dad. That's got to be so frustrating to be so far away.

Very weird - we're both from central CA, both have a brother named Brandon (mine is also the 3rd child AND family comedian), and we're both the 5th child (though I have a sib 7 years younger - accident baby, obviously). That's pretty funny!