On Saturday our Sponsors and compulsory friends “The M’s”, along with another couple “The F’s” (who are also new in town) took us on our first Japanese adventure. (Not counting dinner on Thursday night to Cheese Roll House.) 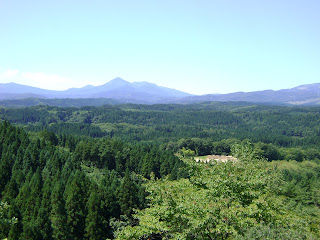 The M’s said we were going to “The Horse Park”. A place they’d been meaning to visit which came highly recommended by friends. Evidently, “The Horse Park” contained not only horses, but a large slide. Not knowing what to expect, (besides horses and a large slide) we crammed ourselves into two respective cars (they make ‘em small over here) and set off. 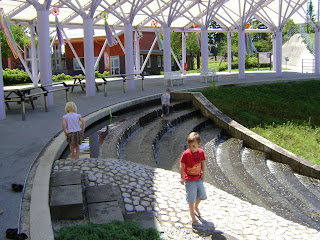 When we arrived, we found a fountain area decorated with streamers (which made me feel happy because obviously the Japanese people like a good party as much as I do.)


After walking through the main building which contained an eating establishment offering ice cream (immediately catalogued for future reference) we encountered a large slide. A horse slide? Possibly. Hard to say. But definitely a slide. And slide we did. (You might say we slid.) 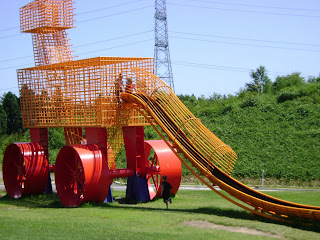 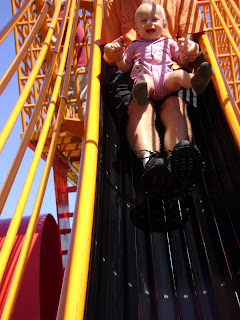 Next, we walked to another much larger playground area, where some FREAKIN' ADORABLE little Japanese girls were chattin’ me up. (Me: "HI!!! MY NAME IS EMILY! WHAT'S YOUR NAME?!?!" It always helps to talk extra loud.)... 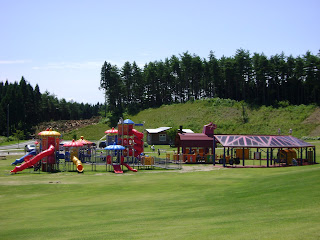 ...and then, eventually up the hill to a fenced area which contained the “horse” part of the “horse park”. i.e. Horses. But not just horses, PONIES!!! The dream of every rainbow-and-horse-loving little girl on the planet. (I must admit they were pretty darn cute...for things with excessive hair...) 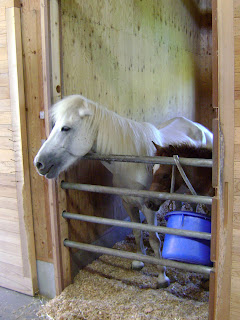 And then I stopped at the bathroom.
And my jaw dropped.
Because I was under the (VERY WRONG) impression that they only had “squatters” in China. Evidently not. 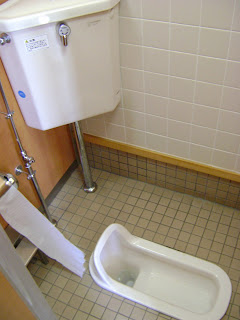 Don't worry, I found the handicapped stall which accommodates not just the handicapped, but the American visitor as well. (Some may claim we’re one and the same.)


(Evidently this is one of the nicest bathrooms ever seen by the M's because it has not only toilet paper, but the handicap (American) stall, and hand soap as well! (Janeen just told me some disturbing information about squatters, but I'll save it for another post.))

And finally, the last surprise: The REAL big slide. 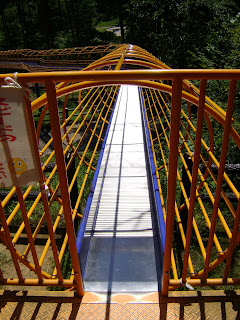 Not the strange animal-esque thing in the front. No, THIS was the big slide they were talking about! A ginormous serpentine cage traveling down the mountainside. 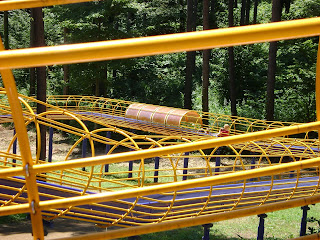 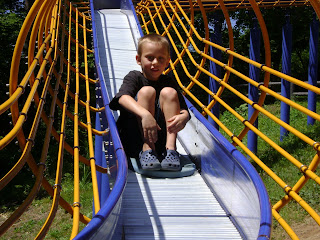 With no supervision, and no monitoring by park employees, we all agreed this was DEFINITELY not something that would fly in the states. But, of course, it DID have these safety posters! 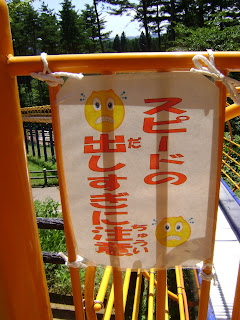 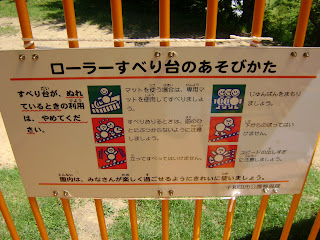 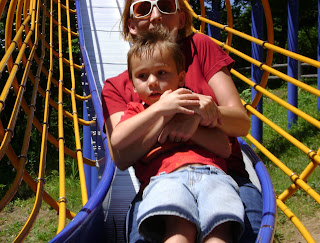 Email ThisBlogThis!Share to TwitterShare to FacebookShare to Pinterest
Labels: Travel Adventures in Japan

That is so FREAKN" awesome!!! Definitely put that on the check list of things I want to do when we come and visit you!!!!

Yes I am counting Yuko as the "entire country"!!!

PSS can you go into your blog settings and change your time zone for me! It is set to the east coast and well... leaving a comment and seeing that time stamp will probably be the only times I actually know what time it is where you are!!

Yeah...I'd love to go change my settings for ya Chrissy, but I can't read the options at the top of the page any more. They're in Japanese now.

I'm sold. Where are my suitcases?

(Squatters don't scare me. At least they have bathrooms in Japan, unlike the country I served my mission to.)

Thanks for visiting our blog. My husband is a professor in the states and we did a summer exchange. My husband is also German, so that is why we picked Switzerland. It has been fun, but boy are the swiss a little grouchy and so many rules. We seem to get yelled at least once a week. I think they might be related to New Yorkers, but I actually think New Yorkers are even more friendlier than the swiss. What an adventure you are having! It will be something your children remember for their rest of their lives. I am glad you have a nice ward. That helps! The ward here is really nice too. Have fun!

Ok! I will get off your back about the time then!!! I will just have to do math, be it even in the middle of the night!

I wish I were more adventurous as a 17 year old, so I could have enjoyed all the fun stuff japan had to offer.

What a perfect set up! Are you planning to learn Japanese? Also, Have you eaten any of those noodles with ice-cubes and sweet soy sauce? Also a warning: taco soup isn't what you think it is.

Glad you are having fun!

Squatters are the worst! I HATE them!

Fun! So glad you didn't have to squat. Yikes. I am glad you are loving Japan! Yea!

That looks so way fun! I wanna play. Who knew Japan was so pretty.

Those slides are awesome! Japan is so cool. I'm so jealous!