Sorry...sorta forgot I was leaving everyone in suspense.  Here we go...
--
We put the bunnies in a recycle bin in the closet.  Sure, this may seem a little cruel and unusual.  BUT, I snuck them out during the day when the boys weren't around and then we'd take them out again at night after the boys were in bed.  They were so tiny and adorable.  I'd wrap the little one in a dish towel (to protect from pee and tiny claws) and sit with it on my lap and pet its tiny head. 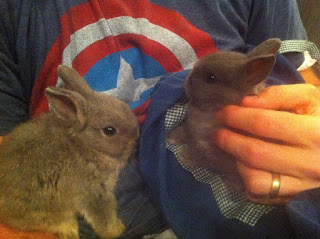 Still, it was a little stressful thinking of them cooped up in the closet under the stairs behind the coats.  We decided to bump up the surprise to Saturday.  The Easter Bunny could come a little early.  The fateful morning, we set the stage.  We had a book on bunnies from the library and placed it at the top of the stairs.  A stuffed animal bunny went half way down the stairs.  Other bunny Easter decorations were placed strategically along the path to the big reveal.
We set up the camera just like Christmas morning.
We put Phineas and Ferb in an Easter Basket in front of the fire place.
(Yes, Doug had named them.  The small one, my favorite, was Phineas--tiny and more active.  Ferb was slower and more cautious but also more cuddly.)

We called the boys down to the Family Room. 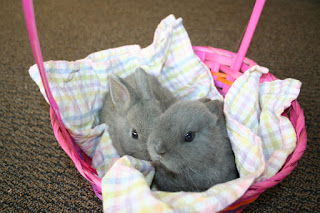 They came in to the room and stared at the basket in confusion.
Are they real?
Are they ours?
Can we touch them?
Just what exactly is happening here???

It wasn't long until they fell in love too.

What a fun day!  The boys took turns holding them.  Built them lego houses.  Crawled after them as they hopped around the house exploring.  Sam taught Ferb to get off the couch using a big Rubbermaid lid as a slide.  (Phineas had no trouble hopping down unassisted.)  Gabe tried to feed them straw and bunny feed.  Doug and I contemplated living arrangements.  They were going to have to live in the garage.  But I was envisioning a super cute $200 wooden, raised bunny hutch.  Doug was okay with the $40 plastic version.

All was right with the world.

Max started rubbing his eyes.  They were turning red.  Getting puffy and swollen.  At the same time, Doug came in contact with the hay for the first time and started sneezing.  And sneezing and sneezing.  And if you've ever heard Doug sneeze, you know it's a very...jarring experience.  We noticed Gabe and Sam had light rashes on their tummies from where the bunnies had poked them with tiny claws.

We started thinking maybe bunnies weren't such a great idea.
He went through a few scenarios:  Keeping them only in the garage.  Keeping them away from Max.
But decided it just wasn't going to work out.

That evening, with Max's eyes nearly swollen shut and Doug sneezing non-stop, I called the bunny lady and asked her if she would take them back.  She wasn't thrilled with the idea--being as it was the day before Easter.  But she graciously offered to take them and return our money.  I may have shed a tiny tear.

All of just decided to go together.  The whole family wanted to see where they were going.
The bunny lady was very nice.  She let the boys into her back yard to see Phineas and Ferb returned to their first home.  (They seemed happy to see their older rabbit buddies)

[Then she let them go around to the other side of her house and see the miniature horses she said she keeps as lawn ornaments.  (Yes, the boys were extremely jealous...maybe we'll try those next!)]

We left her house that night a little dejected and depressed.
But hey, bunnies for day is better than no bunnies ever, right?  RIGHT?!?!?!?

Oh well.  Next year the Easter Bunny will stick to delivering chocolate!!! 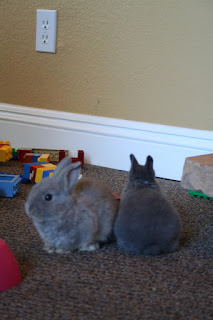 Oh dear, I am so sorry...blasted allergies. I showed my kids the pictures of the bunnies and they loved their names. Maybe you could buy Gray a bunny suit and he could be the family pet.

So what you're saying is that you gave your family allergies for Easter.