So the other night Doug arranged to take me on a surprise date.  He got a babysitter and everything.

It was a Wednesday night.

I was sure he was taking me dancing or to a dance class.

I'd used various deductive reasoning techniques to come up with this theory and I was very sure of myself.

I told at least two people we were going dancing.

I put on a swingy dress and my new red heels.

I applied full make-up AND even a tiny bit of perfume.

We went into San Diego to "The Mysterious Galaxy Bookstore" for a book signing by
Brandon Sanderson.

And it was AWE.SOME.

Even better than dancing!  The rest of this post will now be addressed to someone else: 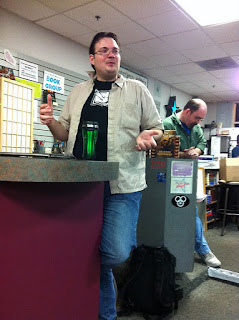 Dear Brandon Sanderson,
First, I'd like to start by saying, I'm sorry we walked in to your reading late.  If I had known we were NOT going to a Swing dance class but instead going to hang out with a bunch of fantasy readers, I would have held off on the make-up and heels and we would have been on time.  My bad.  (But also Doug's bad for not telling me sooner.)

However, how AWESOME was it that there were two empty seats for us on the front row?  (Totally awesome.)  I could NOT believe my luck!  And hearing you read Legion was really cool.  (BTW, is that title a Biblical reference?)  I wont lie, I recorded your whole reading on my phone.  But I wont post it unless you say it's okay.  (But I might send it to my nephew in Utah even without permission 'cause he's a huge fan.)

Anyway, mostly just wanted to let you know it was a great night.  My husband and I are huge fans!  (And so are our boys because they've been listening to the Audible version of Alcatraz and the Evil Librarian.  So stinkin' funny!)

Also, I'd like to tell you a little about myself:  I am an avid reader.  I have been since first grade when I got hooked on Boxcar Children.  I'm pretty much always reading at least one novel.  At the moment, I'm reading three different books.  (One in the bathroom, one in the car, one by my bed...you get the idea.)  My point is, I read a lot.
And here's the thing:  I think you are HANDS DOWN one of the (if not THE) BEST AUTHOR I've ever read.
Your intelligence is astounding.  Your imagination is awe-inspiring.  Your worlds are incredibly cohesive and believable and awesome and deeply-developed-without-being-overwhelming and awesome...

But of most importance to me, your books have something I learned about in college:  they have Artistic Unity.  In your words, (heard on a pod cast Doug found--if I'm remembering correctly...) "no unkept promises".  (or was it unanswered?)  Anyway...

Every tiny detail in your books is in your books for a reason.  When I finished the Mistborn series, I was sad that it was over, but HAPPY because you had answered all my questions and resolved every introduced issue.  What a freakin' awesome series!

{I'm SO glad you've chosen to continue it in a different time period.  I would be reading my signed copy of The Alloy of Law right now if it weren't for those other three books and the fact that Doug got to it first.}

(An aside:  Once I read "The Historian" and it sucked.  Not because it was about vampires.  Because it lacked cohesion and left MANY questions unanswered.  I'm still bitter I wasted so much time on that book! Just like stupid Lost!!!  I'm still mad at you and your lack of ARTISTIC UNITY Lost!)

Also, I know when you travel, Tor probably puts you up in some fancy-shmancy hotel.  BUT, if you ever crave more homey accommodations in the San Diego area (that include yummy healthy homemade dinners with unhealthy desserts), know that you and your family are more than welcome in our home.  You mentioned you have two boys.  We have four, therefore; plenty of boy toys.  (Not "Boy-Toys" per se....oh, I know you know what I mean 'cause you're a freakin' genius.)  I'm just saying you're welcome to stay with us.  And I promise not to be too weird and fan-ish.

(Okay well, I'll ask for another picture because the one where we're posing with you turned out super blurry... :( 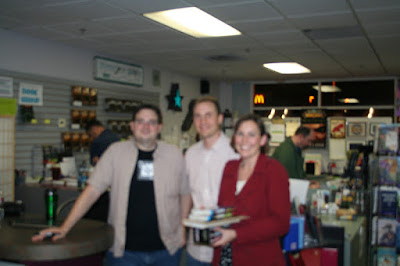 But after that I'll be normal.  I swear.)

So to sum up, you're the best writer ever and it would be super rad if you wanted to bring your family and sleep in our guest room.

P.P.S.  This is my first fan letter.  Did I come on too strong?  Sound too stalker-like?  Dangerous?  Sorry.  I swear I'm normal(ish).

POST EDIT:  My blog posts are automatically e-mailed to my mom so her comments come to my e-mail in-box.  This was her response to this post:

Dear Emily,  Great fan letter!  I'll have you know that I borrowed and read (my brother) Brandons  copies of Mistborn!  They were OK.  What shall I try next that's not so far out into ugly and violent cretins?  I didn't like all the good guys expiring.
(Not ALL the good guys expire...!!)
But I love you and Brandon, and I trust your judgement normally.


(I told her to try Gail Tsukiyama--an author I read and liked in Japan.)

Hahaha, you're funny, Emily. And, I completely agree with your grudge against LOST. I am still myself angry at LOST for wasting my time on all those awesome episodes, thinking the writers were headed somewhere with most of it. BUT THEY WEREN'T!
And, I might have to look up this author the next time I start a new book, your recommendation is so glowing :)

(Mostly lurker here)
When I started your post, I immediately thought of the last (and first?) time my husband took me on a surprise date - to a Brandon Sanderson signing! And then I wondered if that was your date, which of course it was! I love Brandon Sanderson's books - and Alloy of Law was great, I thought. I wish I could have gone to a signing this time, but it was several hours away :( I wish I could be friends with him and his wife, in a non-stalkery sort of way. I always love finding out when other people have read him - I think my estimation of them usually rises, just because he's that great.

Hi, I am your other lurker and just happen to be Thora's sister. I just finished Alloy of Law yesterday. LOVED IT!! he is my favorite auther. I loved this post. I wish that I could have gone to the siging, but we were an hour a way and in our multi-stake perforemance of "Savior of the world" Maybe next time. I loved the Alcatraz books too. So funny. :)