A Few (a lot of) Little (back in America) Things

aka:  17 blog posts combined into one!
*When we got to town, we were greeted by all four of my siblings and my mom!  We got to have a mini-family reunion and the boys got to see lots of cousins they haven't seen in three years.  It was typical of all our Call-kid reunions: full of drama but highly entertaining.  (My dad and his wife Claudia also came down for a visit so we got to see them also.)
*Costco and Target are all that I hoped they'd be.  And more.  I love them.  I want to marry them.
They're also exactly what Doug expected they'd be:  Places I spend too much money.
Poor Doug.

*I may have gained some weight since my arrival.  Not sure why...?

*We have super cute kids in our neighborhood.  They brought these over the first day we were here: 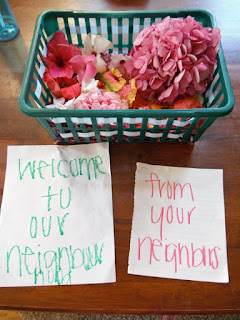 *After being in Japan, where the HIGHEST freeway speed we encountered was 70 KPH (43.5MPH), driving the speed limit here feel like reckless driving.  People keep racing past and around me and I realize it's because I'm going 20 under.  It's terrifying.

*I can't for the life of me remember which side the drivers side is when I need to get in the car, or how to turn on the blinker not the windshield wipers.  And yes, sometimes I forget which side of the road I'm supposed to drive on.

*Sam had to be dragged (yes, literally) to school kicking and screaming the first two days.  Last night he cried himself to sleep.  He said "I DON'T want to live in California!  I HATE school, I DID NOT want to move to the states, and I WANT TO GO BACK TO JAPAN!!!"  Poor kid.  Have I mentioned he doesn't like change?  (*Note to self:  Inform neighbors that we don't beat our children.  Sam just screams really loud when he's upset.  Which is a lot.)

*Yesterday was our 11 year wedding anniversary and we got to spend part of it in the temple we were married in.  (Followed by lunch at Rubio's and a cupcake from Sprinkles.  It doesn't get much better than that.)  And I decided that, yes, I would marry Doug again even now that I know he has the sense of humor of a 13 year old boy.


*After three years of NO visitors (aside from the H family's post earthquake stay), we've already had one overnight guest!  My high school friend Naomi came down from L.A.!  I had a great time blabbing with her by the (community) pool and the boys loved her.  Her visit was made even better when we went to the beach and dinner with two other awesome high school friends. 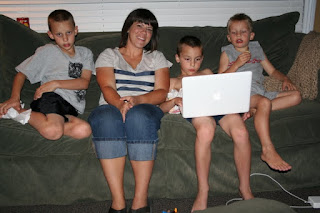 *My friend Kristen, shown on the right, helped us house hunt.  She is amazing and deserves to be sainted.  I'm so happy we're neighbors!!!

*We took a trip up to Monterey, CA to visit the afore mentioned H family.  Camille got baptized and we were thrilled to be able to be there.  It was a quick trip, (not the driving part--that part was long) but we had a blast and were so happy to see Tami, Wes, and Kiddos again.  It was, as Wes said, "EPIC!" 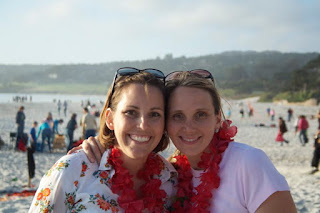 *San Diego is paradise.  Every morning is foggy.  Then the fog burns off and it's pleasantly warm the rest of the day.  If it gets too hot, open all the windows and let the breeze in.  Things are blooming all over the place.  Colorful hot air balloons pretty up the sky.  We have hibiscus and jasmine and roses and rosemary and lavender and all sorts of smell-good stuff in our yard.  (And I'm going to start some veggies in pots soon, and when our ship comes in, I'll buy some dwarf citrus trees!!!)
Paradise I tell you!!  (And NO EARTHQUAKES!*)

*And I love our house.  It feels like a mansion compared to our Misawa 4-plex.  (Though the base housing had more storage.)  Cute, no?  The boys each have their own room (Gray gets a closet) but have to share when guests come.  It hasn't cut down on fights, but I'm still hopeful.
*Favorite part for the boys?  Garage door, hands down.  They fight over who gets to push the button to open and close it.

*Oh, and did I mention?  NO MOSQUITOS!  You can go outside at dusk and not get eaten alive!  (I don't know what they're spraying around here, but Misawa needs to get some.)

*But wait--San Diego isn't totally perfect.  It does have crows.  Not the monster mutant crows of Misawa, but I've seen 'em.  (Even the Garden of Eden had a snake in it...)

*And speaking of visitors,  (weren't we?) we have a batch coming tomorrow.  Two aunties (D's seesters) and two cousins are en route from Utah even as we...blog.  Yay!

*Yes, I know California is earthquake prone.  And it'll probably have a huge one now that I've moved here.  But I don't care.  All that matters is we haven't had one here yet!  Days and days with NO TREMORS!  That's huge, people!

Email ThisBlogThis!Share to TwitterShare to FacebookShare to Pinterest
Labels: a few little things

I'm going to pretend that that picture of me does not exist on the Internet because your boys are so dang cute.

LOVE LOVE the house, and jealous you got to see Tammi!!!

Yay! For all things about coming home! I've spent my fair share of time at Target this summer too. Love the house and love the lack of shaky ground. Hope the boys (Sammy) gets settled in soon. Change STINKS, wish I could throw a few tantrums!!!

Welcome back! I love that house. Now I want to move to San Diego like tomorrow! :)