Me vs. The Wii

(I submitted this to MMB a few months ago, but never heard anything so...I'm publishing it here.)

I wasn't against my sons having a video game system so much as I was vehemently opposed to it.  So when our oldest, Max, started asking for a Wii a few years ago, I said the following:
"I will never, ever buy you a Wii.  (Or Game Cube. Or Playstation. Or Atari!)  If you want one, you'll have to buy it yourself!!!"
HA!  I showed HIM!
So he saved up his earnings from chores and his $10-for-every-month-you-don't-eat-candy, and approximately a year after our conversation, he bought himself a used Wii from his Uncle Dave.
Wii wins!
(Didn't see that coming...)
What's a mom to do?  Tell you what Doug and I did:  We told the boys they (Max has to share) could play it for one hour on Fridays (assuming chores and homework are done) and two hours on Saturday (assuming chores are done and it isn't a beautiful day outside.)
Also, if there is fighting, crying, or whining, the Wii gets turned off and boys get kicked back out to the back yard.  (Where they should be anyway.)
This set-up has been working well since December.
More recently, I've instituted an additional incentive program.   If I catch them doing something nice or being extra helpful, I give them a marble in the "extra Wii time" jar.  Each marble is worth 5 minutes that they can use ANY TIME!  One week they earned 20 extra minutes and I got some extra work out of them!
Surprisingly, the Wii hasn't been too bad to have around.  And I'm realizing I haven't even BEGUN to test the limits (or 'plumb the depths') of it's potential.
That is, until yesterday...
See, for the last year or so, I've been trying to prepare child #2, Sammy, (who is extremely averse to change and does NOT like trying new things) for Piano lessons.

Maxwell has been playing for almost two years, and I think Sam is ready to start now.  He sits down and plunks on it everyday anyway, AND his best buddy just started lessons--so I figure now is a good time.
He was actually starting to respond favorably to my nudging...until recently.  That's when Doug decided to step in and "help".  In his defense, he thought he was doing what I was doing...just trying to ease Sam into it.  So he said "Sammy, piano is really really hard, but if you practice a lot, you'll like it and get good at it!"
Next time I mentioned piano to Sam he said angrily "I am NOT doing it!  It's too HARD!!!"  (Six month regression.  Just like that.)
I tried to argue with him for a minute but I could see he wasn't backing down.
So I said,
"Fine Sam.  If you don't want to take piano, you can no longer play the Wii.  If you take lessons and do your practicing, you can still play the Wii."
His eyebrows shot up.


He had no response to that.  And no more protests.
He'll be starting lessons on Thursday.
It's called "Parental Currency" people, and I know how to use it!
Mom wins!
Post script:  He's been taking piano for a few months now and does really well.  He actually practices without being asked!  Who woulda thunk it? 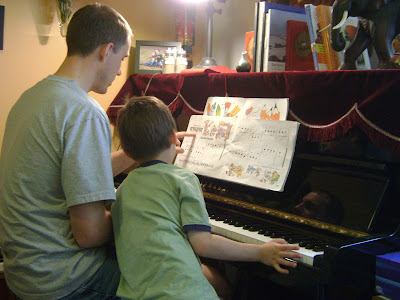 Oh yeah, You pulled out the mommy manipulation tick, good for you!

Can I just say that I think your rules are a bit harsh! Does it have to be raining for them to play? Really?

So with you sister on the "you belong outside instead of inside on the Wii." We have a beautiful Utah summer evening on our hands and your niece is watching Eloise on the telly, your nephew is playing mlb2k10 on the Wii and your s-i-l is reading you blog for the first time in months! I wanna go back to sea ranch where we'd all be on the beach. We've been doing marbles too! Cash for marbles. He just bought his Wii game with it!

Raining or SUPER HOT like today! (They're playing right now because of a base wide warning to stay inside out of the heat, drink lots of water, and avoid strenuous activity.) And I'm even letting them play longer than their allotted hour cause it's so stinkin' hot!!!

Yes, I know I'm a a party pooper, but I really REALLY didn't want a video game system!

who knew the Wii was such a powerful bargaining chip?! I have tried to be strict with ours, but sometimes I forget to enforce. Or I forget what day it is. We do video games every other day around here, it works pretty well for us. I wait till the kids are in bed and then it's all mine bwahahahaha!

I love the rules! And I love the story. I would have those same rules if I had kids. I flew to Seattle this week to babysit my nieces and nephew (5, 3, 1 yrs. old) and wished I knew a few more "super" insentives. Manyly I used food...the kids love fruit (since sugary things are not in their home) and so fruit was the insentive. It worked for everything except "accidents" by the little boy. My brother and wife went on "trek" with the youth in the ward. Hopefully they had fun because this was a TOUGH week for me. But I do have very cute nieces and a handsome nephew.

Em,
When you come to the states next and may need a place to stay in Seattle, both Claudia's son and daughter live there and would be happy to put you up if needed, and by the way, both have a Wii system. When you come south and may need a place to stay here, both Hillari and we have a Wii system too. If you want to meet in Monterey, we could bring it with us. Just FYI
DSC