After going to Korea on Monday/Tuesday, we turned around and went camping Thursday/Friday/Saturday. 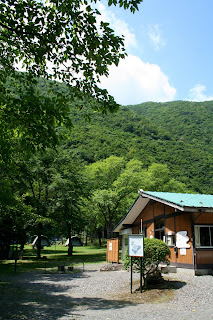 It was the longest week of my life and packing for the trip in million-degree heat may have caused a tiny (ginourmous) amount of marital discord, but we did it and it was pretty darn cool. 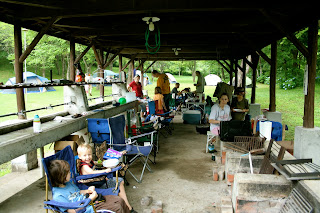 At this point you ask, "Does Doug EVER have to work?" and I answer, "Yes.  Whenever I want to sleep-in, (daily) go to the store with no kids, or whenever the toilet over-flows, or a kid has a poop accident, he is at work." 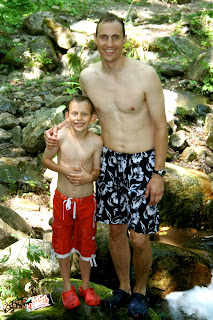 So we drove the 19 (3-4) hours South to Ryusendo and camped at the camp ground right next to the caves with 4 other families from church.  It was a pretty nice facility with grass, a cooking area with running water, clean new bathrooms, and even a coin operated shower.  Oh, and some of the largest bugs I have EVER seen.  Present company excluded. 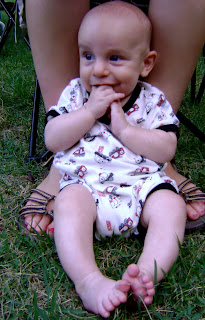 I was worried about how Gray would sleep because it was so stinkin' hot and our tent didn't come equipped with a ceiling fan.  But he was a champ and did awesome. 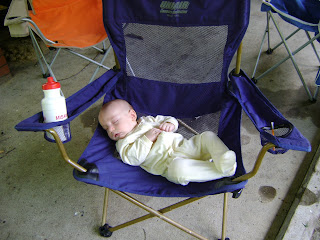 (My kids are great sleepers.  Thank you BabyWise 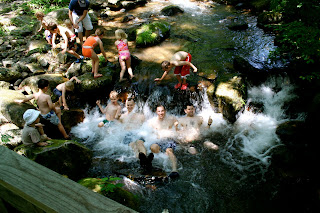 The caves were pretty darn spectacular even though the boys were less than impressed.  It was super cold inside and their clothes were wet (because it was super HOT outside and we were playing in the water) so they walked in and immediately wanted to leave. 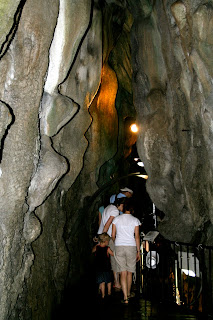 But we dragged them through the whole route anyway.

Doug kept trying to get Max to look at cool things and get excited and finally Max replied
"NO!  I DON'T CARE ABOUT ANYTHING IN THIS CAVE!"  sigh. 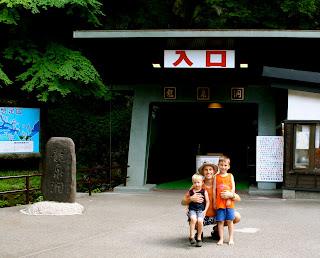 From a Japanese website:
"One of Japan's 3 greatest limestone caves, Ryusendo has a number of underground lakes enriched with water of exquisite features. Sceneries of the lakes, keep the massive volume of water ever quietly, are exposed to visitors when they proceed in a long, narrow, and complex underground path in the giant cave.The first lake to be encountered in the cave is called "Ryugu-fuchi (pond of Dreagon palace)", known for high level of transparency of water as one of the highest in the world with 41.5m. The third lake has a depth of 98m, and its emerald-like shining water is the highlight of the tour. Spring volume mounts 17 thousand tons daily in Ryusendo, flowing out into a river. Temperature of this remarkable water is naturally kept at 7～10℃ throughout year. Notably this water is bottled and marketed nationally under brand name "Ryusendo-no-Mizu (Water of Ryusendo)", known also for winning Gold awards in Monde Selection. 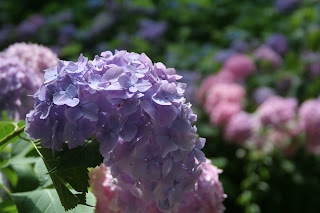 It was a great trip despite coming home with 10,000 mosquito bites and a boat load of laundry. 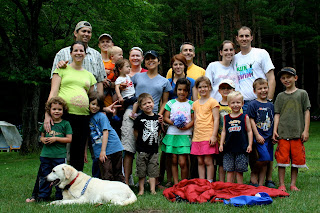 But not someday soon.

Those caves look awesome. Cold and all.

Looks like a ton of fun! Don't you just love it when kids make having fun difficult? Me too.

Hi! I am living hear in Japan on Misawa Air Base and we are going to the caves this weekend and wanted to camp as well and i saw that you guys camped right next to the caves. can you give the name of the camping site so i can see about getting a spot?