Been to the (Mormon) Temple Lately? 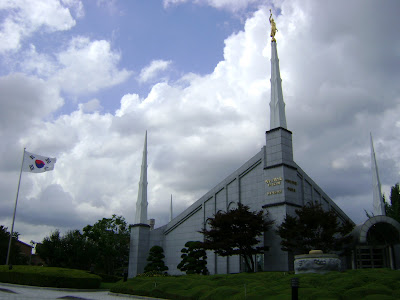 Are you a Mormon?  Have you been to the temple lately?
How long did it take you to get there?  Five minutes?  Twenty five?  Two hours?

Worthy members of our church are encouraged to visit the temple as often as possible.  Once a week would be FABULOUS.  Once a month is considered pretty dang good.

With more temples being built all the time, it's getting easier and easier for members of our church to visit the temple.  But there are still areas where temple access is limited.  For example, right now we live in Northern Honshu Japan.  The nearest temple is in Tokyo.  To get to the Tokyo temple, we can;
a) take a train $300 per person r/t
b) take a plane for $300 per person r/t, or
c) drive for 12 hours each way plus a few hundred dollars in gas.
d) wait and go in the states.
Which is why we don't often get to the temple.  At the last General Conference it was announced that a new temple was being built in Sapporo on the island of Hokkaido to the North of us.  Unfortunately, this is still almost just as time and cost prohibitive.
Which is why we were excited to gain access to a new option:
e)KOREA!
Just so happens there is a temple in Seoul Korea.
Just so happens they started offering military "hops" (free flights) to Osan Korea recently.
They leave here Monday morning, and return from Osan to Misawa Tuesday morning.
Did I say free?  They're free-fifty-free.  Free transportation to Korea.
A two-and-a-half hour plane trip and two hours by train to get to the temple!
Only problem:  The temple, any temple, isn't open on Monday.  Meaning we'd have to stay in Korea a week to take advantage of a hop and visit the temple. 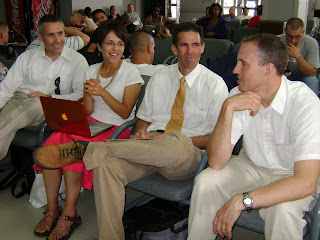 Except we did it!  Without staying a week!  Our friend Tyler called the Seoul Temple and asked if they'd make an exception and open for us on a Monday.  The temple president said okay!

Monday morning early, six couples (many interested parties couldn't get work off) and one adorable Baby Gray headed out of the country.
We flew to Korea. (watched "Date Night" on the plane.  Loved it--especially edited!)
We checked into the on-base hotel in Osan.
We took a taxi to the train station.
We took two trains into Seoul.
(We were VERY fortunate to meet a kind, English-speaking Korean who helped us connect with the second train, travelled with us, and then got off 3-stops early to make sure we found our way.  The man in the below picture is not that man.) 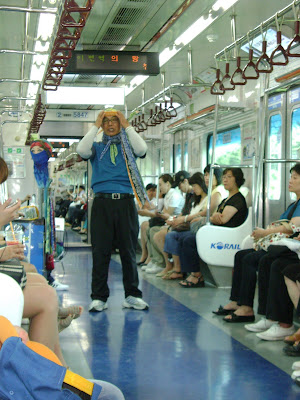 And after only nine hours, we arrived in Seoul and were taken the last few blocks to the temple by a very kind temple worker with a van.
Five adults got to do a "session".  Doug and Baby Gray stayed out.  (Doug sacrificed so I could attend this trip.  He is going to Tokyo next month to climb Mt. Fuji so he'll go then.) 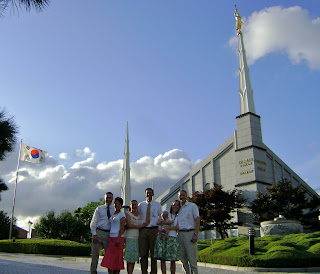 The Seoul temple is small but beautiful.  Like all temples, it is decorated inside with a lot of white and light colors, but it also has some beautiful Korean furniture and neat Asian influence in the decor.
The session was great and the company was excellent.  (The other two couples are great friends and we were happy to be with them.)
After our visit we headed out into Seoul to find a yummy authentic place to eat dinner.  I think our choice was pretty authentic, but whether or not it was "yummy" is debatable. 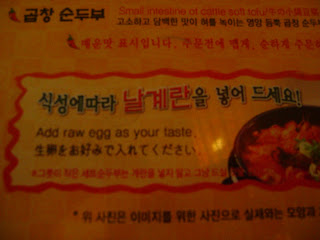 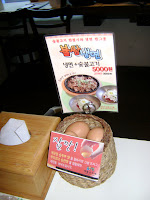 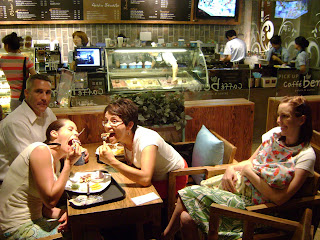 That night we slept in air conditioned bliss and headed out at 5:30 a.m. to go home.
And we're back.  Back to un-air-conditioned purgatory.  And already looking forward to our next trip.
Thanks for opening the temple just for us Seoul people!  Thanks for coming P family!  Thanks for bumping us to Business Class check-in guy!  And especially, thanks for planning it H family!  Let's do it again soon!
To learn more about the temple and the "top secret" stuff we do in there, please watch this super short movie here and then read more here.  And if you don't, and go to some random anti-Mormon spot on the Internet to learn about Mormons or Mormon temples, don't blame me when you are woefully misinformed and brought down into mental muck by the pathetic attempts to disparage an awesome religion and its sacred ordinances.
Just sayin'.
Until next time...

Email ThisBlogThis!Share to TwitterShare to FacebookShare to Pinterest
Labels: I'm a Mormon Yes I Am, Mormon Temples

We used to attend the Seoul Temple when we lived there. It would take an hour to drive the 6 miles to get there.

So glad you had a chance to go!

What a great trip. Free flights and special temple hours...it can't get much better.
We took a military hop to Hawaii a few years ago. It's one of the benefits I miss about being in the military. On the way out we flew on a huge c-5 with oversized reclining chairs and were supplied big boxes of goodies to eat. It beat any commercial flight I've ever taken.

That is awesome! I'm so jealous. That might be something you could talk them in to if you got a big enough group on a regular basis. In Taiwan there are many Filipino workers who only have Sunday off. For a time the Temple President was opening on Sunday for a session for them. I thought it was strange at first, but what better thing can you think of to do on a Sunday?

That is very cool. I love that they opened for you.

And this was the kick in the butt I needed. I have gotten lazy and it's been a very long time since going to the temple.

How fantastic! The longest I have ever had to go was a 6 hour car ride--so more power to you! And sadly--only 15 minutes away--and I don't get there as often as I should.

I'm so jealous! &That's great that you all got to go to the temple :)

Hello!
I am the member of lds from Taiwan. I speak Chinese and a liitel English. I can not speak Japanese. So do you know anyone can speak Chinese or English? I want to ask them about Toyko Temple.
Thank you very much.