'Member how we live in Japan?  I know...it's easy to forget.  But we do!  And sometimes we actually do stuff off of the base!  (Quite frequently actually, I just rarely blog about it.)

But this is blog worthy:  Last Saturday we took an ITT tour to Matsushima Bay.

Matsushima Bay is about 3.5 hours  South-East (I'm making this up!?) of us and is considered one of the three most scenic spots in Japan. (<---that part is true.)

Godaido Hall
(Info from the guide book in italics)

"On an islet known as Godaidojima, stands a worship hall which was reconstructed by Masamune in early 1609.  The 'Go' of Godaido refers to the five enshrined statues which represents the Mikkyo." 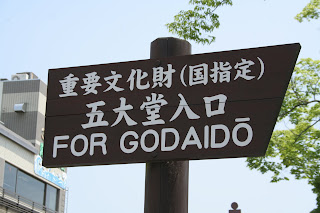 "Sukashibashi:  The bridge connecting Godaido island with the coast was intentionally constructed with large gaps between the boards.  This is so that one can see the ripples on the water through the bridge." 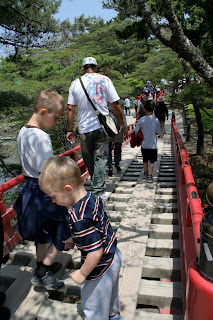 Slatted bridge--awesome for strollers!  Curse whomever forgot the Baby Bjorn!  (me)
"The ceiling within the hall is decorated with the twelve animals of the Chinese zodiac.  This hall is generally not opened to the public except on special ceremonies held once every thirty-three years." 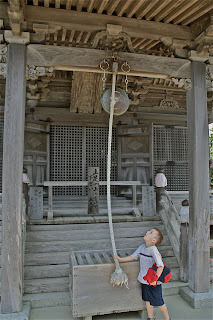 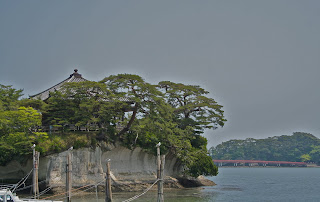 "The Godaido, which is perced on a small island in Matsushima Bay, has special significance for people throughout the area.  Within the vividly colored inside hall are the Godai Myoo Zo, five esoteric Buddhist statues."
to be continued...

Email ThisBlogThis!Share to TwitterShare to FacebookShare to Pinterest
Labels: Living in Japan

Gotta love it when you venture off base. You should really get a maya wrap! It knocks the socks off the Baby Bjorn. I loved mine when we were in Seoul. Also not stroller friendly : )