Christmas Eve:
Our first Christmas away from extended family, (while living in San Francisco) we went out for Mexican food on Christmas Eve. We liked it so much, we've been doing it ever since. (We don't go out here, though. We make it at home. But who's to say whose version is more authentic...the American or Japanese...??)
We had two awesome (very healthy vegetarian) families, as well as a set of missionaries, over for dinner. (See Doug's blog for the cultural lesson we got from the Australian missionary.) 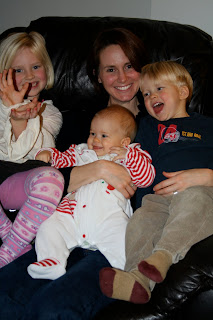 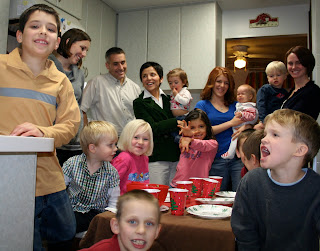 After dinner, we had a spiritual thought from the missionaries, Christmas carols, the Nativity enacted by the kids, 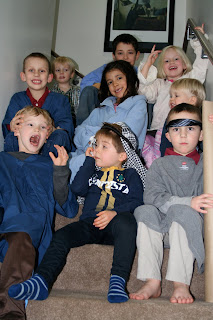 and the traditional Opening of the Jammies: 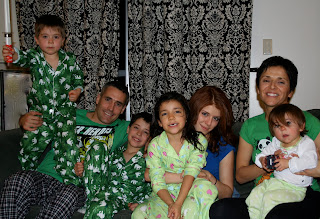 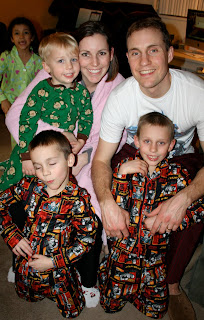 It was a great night with great friends!
Christmas Day: 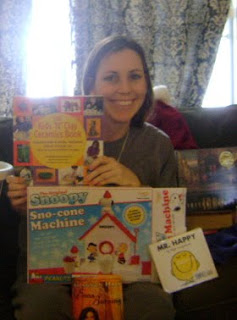 Christmas Morning was the best one I've had since becoming a mom eight years ago. Here's why: (It's not even because I got a new piano, Snoopy Sno-cone Machine, Samurai Sword back scratcher, Sushi Play-doh set, sea glass jewelry and lots of books. Those were just bonuses!!!) 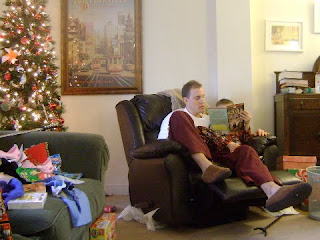 My oldest man-child, Maxwell, takes after his father, who takes after HIS father in the area of "present opening reaction".
All three have the same response when opening gifts, and the reaction is...NO reaction.
Or maybe a smile and one-word response.
An exclamation of surprise or happiness is extremely rare, and a joyful jump is entirely out of the question.
So for Maxwell's whole life, I've watched, the following scene unfold:
--Christmas Morning--
Door opens...
Boy (or boys) run(s) in.
Max see's his BIG, MAIN Santa gift, unwrapped, in front of him.
Max looks at BIG, MAIN gift. MIGHT let out weak "cool!", then, IMMEDIATELY moves on to see what else he has. (Once he even uttered the horrible phrase "Is that all?")
This happens EVERY.SINGLE.YEAR!!!
THIS YEAR, however...HE DIDN'T MOVE ON! He didn't look for more!!!
He saw his HUGE pile of loose Lego's (purchased by a thrifty Santa on e-Bay) and with big eyes, moved in and started building!!! And KEPT building happily not even ASKING to open his wrapped presents under the tree!!! Not even bothering to raid his stocking for candy!!! 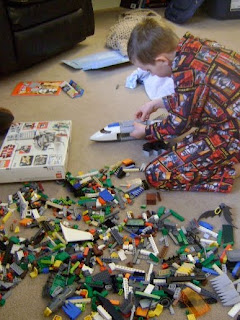 It seriously warmed this jaded mother's heart!
Sammy, thankfully, is a lot easier to please. He saw his "Ho town of Gee-o Twax*" (Purchased by a thrifty Santa on Misawa's Virtual Yard Sale) and yelled and jumped for joy.** And ALSO played happily without asking to open his wrapped presents under the tree! 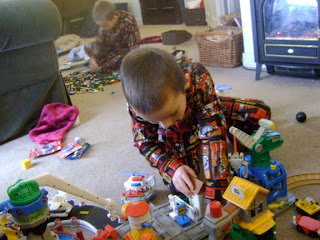 And THAT is how I judge a successful gift-giving year! Great job, Santa!!!! You really earned your cookies this time!
(For the record, Gabe got a Little People airplane, and some rhythm instruments, which he liked, but he was mostly interested in playing GeoTrax with Sammy.) (Here he is showcasing some Anpanman finger puppets.) 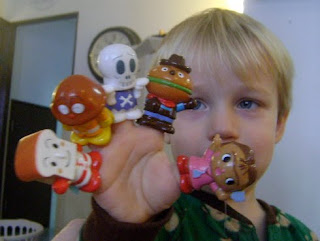 Later in the day, another of our favorite families (not vegetarian) came over for another delicious meal. (Made mostly by Erin of said favorite family.) Turkey, Potatoes, and Gravy, Stuffing, Rolls, Salad, Martinelli's to drink and Chocolate Mousse Cake for dessert. After which the kids watched a movie and the adults played "Sequence". (Thanks Shad and Kellie, for introducing us to Sequence so many years ago!)
Anyway, it was a busy, exhausting, friend, food, and fun filled two days and I wouldn't trade a minute of it. (Except those minutes when I had to tell Erin we had no other side dishes because Doug had taken a nap and I lost track of time reading my novel...ehem.)
I feel very very blessed that in the absence of extended family, we have such great friends here. We really seem to luck out every where we live when it comes to meeting really cool people. (Who accept us for the sarcastic, irreverent, half carnivore/half vegetarian weirdos that we are.)
That's enough of THAT!
Hope YOU had a Merry Christmas too! Your card is FINALLY in the mail!
Happy New Year!!!!
*Note to all parents with boys: We've been through a lot of different trains and train sets. We like Fisher Price GeoTrax the best! Buy 'em on Craigslist!
**The BEST and my favorite reaction of the day: Sam opens a gift. It's two "Pigeon" books. He YELLS gleefully and then says "These awe by Mo Willems! My favowit awe-tho!!!"

What a GREAT Christmas! Looks wonderful! I am so glad you got a reaction (or at least a "didn't move on right away"!!)

I am very jealous about you getting the Snoopy Sno Cone Machine. What a treat!!!!

Hi Dear
you are a lucky guys, who has so sweet family and lovely children, i like Snow Cone Machines very much....

Sounds like a good time. What books did you get?

We love Geo-Trax too! You all look great in your new pjs:)

LEGOS WIN! And my new year's resolution is to stop neglecting awesome people's blogs, whoops. I'm sure you're thrilled.

Bees--
The Kid's N Clay Ceramics Book (I know you're jealous)
Mr.____ & Little Miss____ set (purchased from Book Order, for me, by me, for nostalgic reasons.)
"Execution Dock" by Anne Perry (I love her Victorian England mysteries--and the author herself has quite a fascinating biography if you dig for it.)
and
"Enna Burning" by Shannon Hale (the sequel to Goose Girl which I really liked. Clean, quick read.)
"The Shadow of the Wind" by Carlos Ruiz Zafon which I've heard great things about.

Doug also got a Jonathon Stroud book which I plan to read (We love all his stuff) and the latest Robert Jordan/Brandon Sanderson book which I'll probably read. If I can gear myself up enough.

WHO ME NO NEVER

I've certainly been neglecting actually commenting on anything ever, though.

Loved Shadow of the WInd. Sort of Gothic or something. Excellent translation. I'm reading Half Broke Horses and Her Fearful Symmetry, Just finished the two Hunger Games books (liked) and The Lost Symbol (didn't. Was bored). See, I just buy my mom a stack of books for Christmas, then tell her I get to borrow them before anyone else. Is a good racket. Happy reading!

Oh, and I liked goose girl, but my favorite of hers was book of a thousand days. I'm doing it for book club this year! Let me know about the sequel.

We love, Love, LOVE Mo Willems! Some would say I make my boys love 'em, but I'm pretty sure they like them on their own just fine.