Just Another Day in Japan

6:15 Doug was already “In Formation” for a 2 mile “Readiness Run” with half the base.
7:12 I drag my sorry bottom out of bed 22 minutes after the alarm goes off.
7:30 Doug takes Sam off-Base to a friend who will later take him to preschool.
7:45 I feed Babers breakfast, check Max’s homework, and pack a diaper bag and some snacks. Then head upstairs to see what can be done with my hair. (Not much!)
8:00 Doug arrives and runs in to see what he can do to get us all out. We’re now officially late. Max gets ditched with the neighbor who will walk him to school. I rush out in a disorganized frenzy hoping I haven’t forgotten anything crucial like a binky.
8:30 Doug, Gabers and I all boarded a bus for the compulsory Hachinohe Tour. 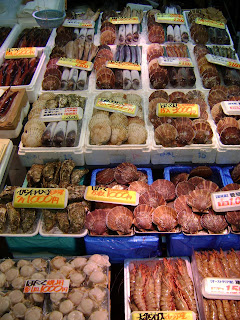 Our first stop was a large FISH MARKET: A Fish Market with LOT’S of SAMPLES. (The breakfast of champions!) We were asked to be polite and be daring! 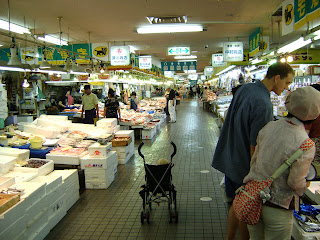 First offering: Dehydrated Squid. My first and last sample. I can be daring with the best of ‘em, but I draw the line at what was offered next: “squid in guts”. (Sometimes allergy stuffiness is a blessing!) Aside from trying many extremely gross samples, Doug brought home two edible souvenirs.  (More on that later.)

Next stop, a Shinto Shrine. It is said (at least by our tour guide) that in Japan, you live Shinto and die Buddhist. Evidently, Shinto covers the partying and good times, and Buddhism covers dying and the afterlife. (And there you have "Japanese Religion and Culture in Six Seconds!" by Emily) 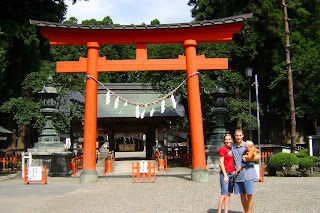 At the shrine we were taught the proper way to enter the holy area, as well as the proper way to offer a prayer. We were told that the Shinto gods don’t mind if you come from another religion; they’re equal opportunity acceptors of yen and givers of blessings. So Doug and I both offered a prayer for X chromosomes that mix with X chromosomes. 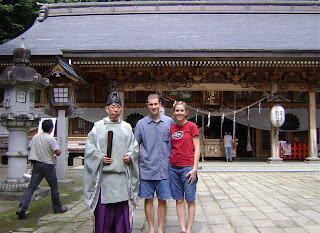 Next:  Train Station.  We learned how to get to Tokyo on a bullet train and how much it costs. (A lot.)
Last stop:  Hachinohe Mall for a little shopping and lunch.  I had some pot stickers.  Doug had a curry and rice dish.  Gabe had what we had.  And Wheat Thins.

14:25  We're back!   Doug stays home to wait for Max, I head to North Base to pick up Sam from Preschool.
18:30 Doug prepares dinner on the grill for us and our new compulsory friends the A's:
Grilled Salmon (Yum!)
(Fortunately without the eggs shown below.) 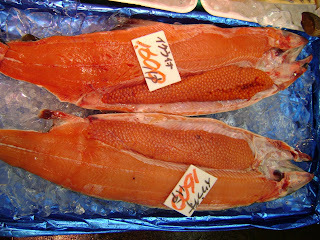 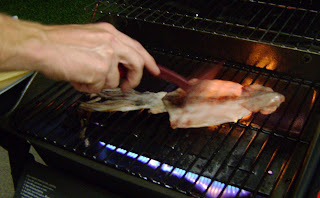 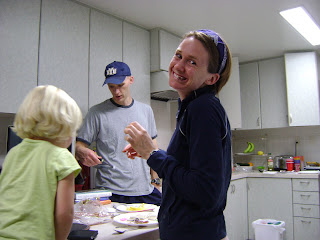 I'm pretty sure Gabe thinks this is an alternate form of Binky.  He chewed on it for a good 20 minutes. 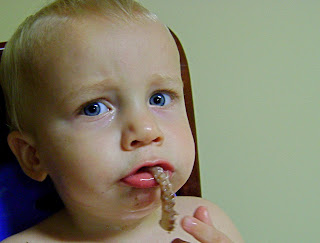 (Please try not to throw-up.  This blog does not endorse that type of dieting.)
21:30 Exhausted blogging commences
22:13 I realize I've been staring blankly at the screen for the past six minutes and go to bed.
This post will be finished and published at a later date.
--The End--

Email ThisBlogThis!Share to TwitterShare to FacebookShare to Pinterest
Labels: Eating in Japan, Living in Japan, Squid is disgusting

What adventurous palettes your kids have.

I would have gone for the pot-stickers and curry too. (I'm totally salivating right now.)

By the way--I love your blog background.

You seriously have a more interesting life than I do now. But it's cool to see that even in Japan some things (like sleeping late, getting kids to school, and staring exhausted at the computer screen) are the same.

that last picture made me gag!!! i'm so glad u guys are liking it there!!! i miss u guys!!

okay, i am throwing up a little in my mouth right now. sick!! i'm pretty sure i will be having nightmares about tentacles tonight.

Okay, I wasn't going to say anything but now I have to.

But I can't spell out the horrible noise my mouth/stomach/ throat are making right now. (Think cat with hairball and you'd be close)

Em, feeding Gabers that tenticle is a form of child abuse. Now if it was deep fat fried and called calamari with a nice spicey cream sauce, that would be ok.

Bleck, squid!!! You lucked out though with having such daring eaters. Although I am sure my kid would have played with the tenticle, I am sure it never would have made it to his mouth. Me, I wouldn't have even come with in 10 feet of the thing, ew!

Emily, I'm Katie V's sister and I look at your blog every once in awhile. I love hearing about your adventures in Japan. My husband served his mission there and we went back and visited about a year ago for 2 weeks. It was tons of fun, but I can't imagine living there with 3 kids! The fish markets were something else and the food, well... half I liked and half I didn't! I must say though, I LOVED wearing the Yukata's around, you must get one and if you ever have a chance to take a little trip to Miyajima you should. Stay in the hotel called the Iwaso. Probably the prettiest place I've ever been http://callcouple.blogspot.com/2007/06/friday-and-saturday-at-miyajima.html. There is a link to when we were there. I know this comment is going on and on and on, Sorry :)