Around here, when it snows, the state pretty much shuts down. (Except for, unfortunately, where Doug works!) For example, this past Monday school was cancelled* state wide because of a (pretty pathetic) snow storm.

In Utah, on the other hand, school is rarely cancelled. While we were there over the holidays, there were numerous snow storms and life went on as usual. There, people have learned to handle the snow. But not just handle it, subdue it and embrace it.

And here's the proof: 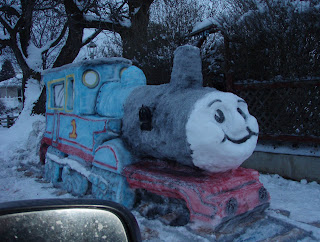 Yep. That's Thomas. Sculpted out of snow and spray painted. This picture was taken in Springville, Utah by my Sister-in-law Christina. (There are, I believe, two more sculpture pictures on Christina's new blog.) Evidently, the guy responsible for this creates these snow masterpieces frequently and continuously all winter long. Here's one I got to see when I was there: 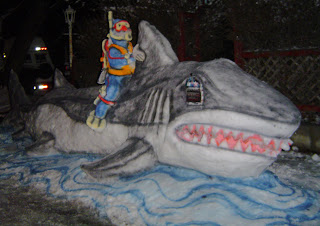 See, this guy obviously isn't afraid of a little snow. Or even a lot of snow in the form of 5 foot tall plowed snow banks.

Take note Little Rhody: Man is meant to be master of snow! Not the other way around!!!

Email ThisBlogThis!Share to TwitterShare to FacebookShare to Pinterest
Labels: Snow

Funny. I was just having a conversation with a friend at the gym as we both watched CNN report on the snow back East. This snowstorm was major news! We both laughed (and were a bit jealous) when they explained that school, etc. was shut down. Another friend from the East tried to explain that the snow was different there. Hmmmph. I'm still not convinced.

We're out of school today because of a little snow. I happen to like snow days though. (Except for the part where the kids want to go out and play in it... They last about 12 seconds and then come back in soaking wet and crying because their fingers are cold.) But I REALLY like how everything slows down for a day. It's my perfect excuse for lighting a fire and drinking hot cocoa!

i could totally make that!

Those are AWESOME!!! How fun! Honestly, though - if it snowed in any real amount here, the city would shut down. That's why I love the desert... no snow. =D

Looks like fun & very cold! Hey I have entered the blogging world finally! Our site is http://melanddrewtwo.blogspot.com/ check us out! When I'm feeling better I will be taking it over but for now Andy has! Love ya :)

YOU are awesome! We miss you!

OH! The old guy who does the sculptures must only like the snow and not the cold, because seriously he does one everyday, but it is 7 degrees right now and it was 9 yesterday. (those are the high) anyway, my kids are shocked everyday when we drive by that he hasn't done a new sculpture. I will let you know when he gets going again.

I am jealous of everyone who left comments for you! Emily I totally almost started crying when i had to walk from the south side of campus to the outer most parking lot (north) of the WILK. I forgot gloves, and my hands hurt so bad.

Mona, Snow is NOT different here. They're just more ill-prepared to handle it. (And people refuse to learn to drive in it.) Which would be perfectly reasonable if this were a desert like where Lindsay is. But it's not. It snows every year. You'd think they'd learn.

Jessi, I drink hot chocolate daily regardless. I think you should do the same. And it TOTALLY drives me nuts when I spend 15 minutes getting the boys bundled to go outside and they come in 5 minutes later!

Chrissy, Of course I stole it! But I gave you credit and a blog plug! You should be singing my praises! P.S. I'm sorry it's so stinkin' cold there! Don't forget your gloves!!!