We're home from Florida, and I have to say...it is now on my list of places I could possibly live long-term without dying of Seasonal Affective Disorder. So far, the "list" includes Carlsbad, CA.

(I suppose Arizona could also possibly make it on the list, but I've never spent more than three days there so I can't calculate what affect the lack of ocean might have.)

Anyway, back to the vacation. The first two nights we stayed at the awesome and very atmospheric Disney's Boardwalk Resort. My dad has a time-share there and was generous enough to let us, and our friends, use two nights each. 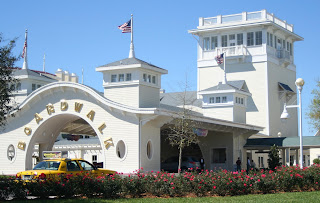 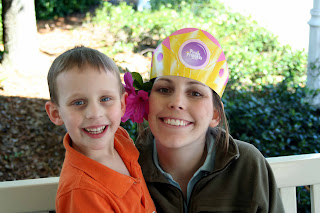 (Waiting for the Shuttle Bus. Max kept busy by picking me flowers.)

After checking in, we went straight to the Magic Kingdom for the rest of the day. At first the boys were a little groggy and mellow due to being awake since 6 a.m., but before long, they got into the spirit of things and were excited to be there. 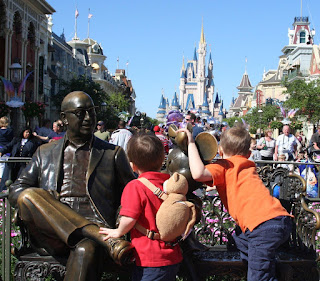 One of our first stops was Pirates of the Carribbean. Both boys are totally obsessed with the movie even though they've only seen one five-minute segment. (Doug let them watch the 'Captain Jack vs. Will Turner' blacksmith shop sword fight.)

The ride dumps you directly into a gift shop filled to the brim with every imaginable deadly weapon and pirate accessory . Fortunately, by depriving Max of all toy weapons for most of his life, he has an aversion to violence and had no desire to participate in anything remotely pirate-ish. 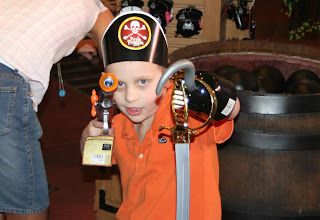 After making it through the gift shop, limbs tenuously still attached, we happened upon a pirate show. Max got picked out of the audience to learn a bit about being swarthy from Captain Jack Sparrow himself.

Here he is getting some pointers about how to strike, distract, ("Look! It's the Govenor's daughter!") and then run away. He had the striking part down pat. 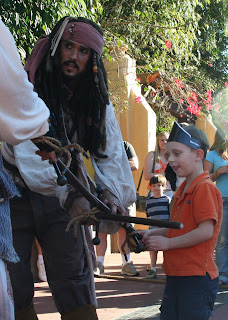 Now he's swearing allegience to Captain Jack and being sworn into his crew. (Notice his top-button is un-done and his skivvies are hangin' out.) 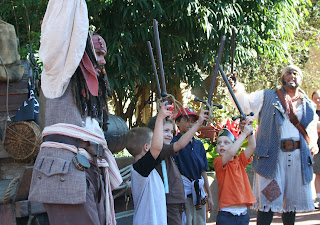 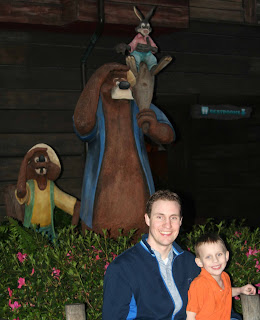 The next ride Doug wanted to try was Splash Mountain. Maxer was barely tall enough and I was worried he'd be completely traumatized by the big drop at the end. Turns out, while I was waiting with Sammers and worrying, Max was having a blast and begged to go on the ride again immediately after...which they did since there was NO line that day! For more complete details, see Doug's version of events. 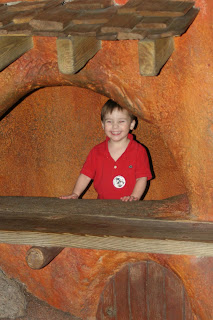 Both Dad and Max were giddy when they met up with us at the tot play place, and Max is now a huge fan Brer Rabbit, Fox, and Bear, and the Briar Patch.

When we got home that night, my friend Angelique had arrived at the hotel with her two kids. (Her husband joined them late that night.) It's been about two years since I've seen her, so it was great to get caught up in person! She has two kids, Curtis and Claire and my boys loved them both instantly.

It was a great day, but day two was even better!!!
Stay tuned...

FINALLY, a picture of you on your blog! Now you are getting the hang of how to do it. It is all about you!

YEA! Sounds like you had a great day one! I can't wait to hear the rest! Yo-ho matey!