Yesterday I picked up a table I found on CraigsList. It was a bargain at $50 despite having only 3 chairs. 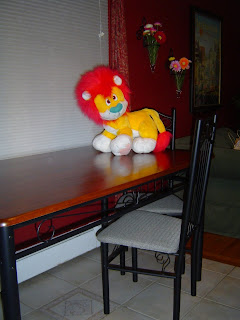 The best part, though, was that the nice Indian couple I bought it from included a FREE GIFT for Sammers!!! A HUGE stuffed Lion. This isn't any old lion, he is BRIGHT yellow (except where he's dirty) with a HOT PINK mane (that really sheds!!!), and a large TURQUOISE nose. I believe he falls into the Amusement-Park-Ring-Toss-Prize catagory as he seems to be filled with shredded aluminum as opposed to, say, cotton. 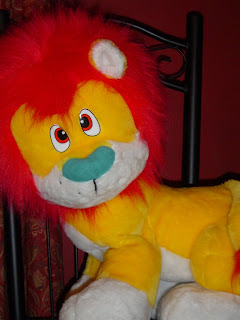 Now if I could only find a way to sneak "YION KING!" into the garbage without Sam noticing. I have a severe aversion to other people's dust mites and used stuffed animals in general. Gross.

On a cleaner note, last night some very generous friends threw a
double BABY shower
for me and another friend, Diane. (She is having her third a few weeks before me.) It was fun and relaxing and they served Crepes which I happen to LOVE!!!

It's nice to know Gabriel* will have a few CUTE NEW clothes and toys that haven't gone through two brothers and numerous boy cousins!!!

All in all, it was a fabulous day filled with awesome gifts!!! Now here's a little gift for you:

A simple Crepe Recipe in case you're looking for something easy and extremely unhealthy for dinner tonight!

Crepes
Combine in a batter bowl in this order:
2 cups milk
2 cups flour
1 tsp. salt
Stir until perfectly smooth. (Some people like to do this step in the blender, but I find adding the milk to the bowl first and using a hand mixer works just fine.)
Next add:
4 eggs
1/2 cup sugar
Beat thoroughly. Pour about 1/4 to 1/3 cup batter into pre-heated pan. (I usually have the stove on Medium. Make sure the pan is non-stick and have "Pam" on hand if you need it.) Tilt pan so it spreads out thin and forms a circle to the edge of the pan. Cook until edges start to look rubbery. Loosen edges. Turn. It will be pretty well cooked, so it only needs to stay on the second side a little longer. I usually turn the oven on "warm" and pile them on a plate in there until we're ready to eat.
Serve with any or all of the following:
Nutella
(or) Hot Fudge
Peanut Butter
Jam
Bananas
Applesauce
Berries, Fresh or Frozen
Whipped Cream
Ice Cream
Powdered Sugar
Powdered Sugar and Lemon Juice
Syrup
or anything else you can think of!!! Enjoy!!!


*I'm set on Gabriel, but PickyDad isn't so sure. We'll see what happens when we get to meet the little guy.

Love the name:) I will send magic vibes to your hubby so he will like it too! Love crepes. Thanks for the recipe. If my kitchen wasn't already clean I'd make some right now.:)

The table is cool. but you need to deep six that lion fast! (forgot to put that in the first comment)

i can't wait to meet the lil' guy. (and i don't mean yion king.) too bad i haven't seen those other two lil' guys in sooo long. (are you reading this mr. dub? are you appreciating the lasting damage we're doing to vital cousin bonding?) oh, and crepes are good. last time i had me some of those i think you made them!

Yeah, I'm not a fan of old stuffed toys either, but it is cute!

Oh, and from the Dunn house, you get one YES vote on Gabriel (from me) and one NO vote (from Michael - who I think is just taking sides anyway...) so I don't think we help that much! LOL!

I totally love Gabriel...it's on my list of fav boy names as a matter of fact.

And it was divine intervention that you posted that crepe recipe because I happen to be planning a girls night out here, with a crepe theme and needed a recipe! We're totally sugar sisters!

I don't even like our own stuffed animals. They seem to magically reproduce in the night and every few months I take a big bag down to Salvation Army. That's so weird that they included it with the table - I bet it's cursed or something and that was the only way they could get rid of it.

I'm a big Gabriel fan as well - but only because I'd call him Gabe. My husband won't go for it though. As if naming a kid wasn't hard enough, you have to appease the kids dad to!

I'd rather have the kid be named crepe than Gabe. But then again that's becuse Mrs. Dub has an ex named Gabe. My vote is for either Mitchel of MST3000 fame or Colt Sievers. Stay strong on the anti-Gabe stance Bartemioius (or however you spell it).

Are you naming your baby after an old boyfriend? or am I thinking of someone else?

I have to stand with the Broz. on the name. Not to hot on Gabe. Can you say Mr. Cotter. I think I would like Yion King better. How about Mark. (or Madison, says Madison) we kinda like Moccison also. however people might walk all over him. :D FHP

cute. and you can call the little guy gabe :)

We have on cousin on the Dubgreen side named Gabe. His dad belongs in jail for spouse abuse and has an ankle locater. Need I say more.

This is why you're not supposed to tell people the name you've picked before the baby arrives...
Ankle locator...sheesh!

Who cares what anyone thinks anyway. It's your baby. You had to carry it for nigh unto 9 months. So name it whatever you want. We will love it to pieces. Besides I think it's a cute name in spite of old boyfriends, jailbird's offspring and the male Dub's aversion to said name. You are the Momma.

okay, I'm mad. I just typed up this uber-long comment and then it wouldn't publish it for some reason. Bah. Here's the gist of it: Grizzly Gram (my mama) said to Barty, "oh, just get over it! if you like the name just use it. once this baby comes he will bring a whole new set of memories with whatever name you give him and it won't matter who else has the name." I think as long as you don't name him Satan or Adolf Hitler you'll be just fine! Take it from one who is named after her Daddy's old girl, who cares? I like my name and that was like 100 years ago.
PS that Yion is frightening!